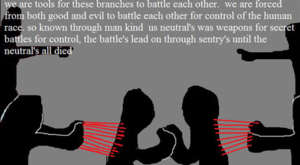 The Neutrals using their strings to control puppets.

This is a list of characters that are used as puppets (usually after being killed) under the control of a Neutral such as Tom, Coyote, or Sylvester.

Taken by Elmer Fudd after being killed by Shadow as he ruined The Awesome Fucking Plan by breaking the detonator. Elmer Fudd eats a bit of his brains, thus gaining his memories.

Bugs is one of the main characters of the Looney Tunes franchise.

Taken by Elmer Fudd after being killed by Shadow to end the hostage situation set up by the Trolls during the Justin Bever concert. Elmer Fudd eats a bit of his brains, thus gaining his memories.

Daffy is one of the main characters of the Looney Tunes franchise alongside Bugs.

Eggman is the main antagonist of the Sonic franchise and is known for his extreme intelect and greed, being able to build powerful robots and his unending desire to obtain the Chaos Emeralds for power.

Taken by Elmer Fudd, when he escaped The Trolls' fortress. Luigi's corpse was kept there by Troll Face as a sex toy and was really well conservated, thus being almost indistinguishable from a living body.

Luigi is the infamous brother of Mario in his own franchise and constantly assists his brother in his adventures.

Not to be confused with Cheeto Man.

Used by Tom. A smaller terrier that is a companion to Spike.

Chester the Terrier is a Looney Tunes character, and a friend of Spike the Bulldog, whom Chester sees as an idol. Together, the two hunt Sylvester the Cat, and ultimately, Chester winds up as the "stronger" of the two in the end of their shorts.

Granny is another character who comes from the Looney Tunes franchise. Similar to Tails Gets Trolled, she is Sylvester's owner (alongside Tweety Bird and Hector). In the shows she is very protective of Tweety and often scolds Sylvester for trying to eat him.

Used by Tom. A bulldog with one of his eyes missing.

Hector the Bulldog is a Looney Tunes character. He is another one of Granny's pets and also helps her protect Tweety from Sylvester's antics.

Used by Tom. Jarry (also known as Jerry) is Tom's arch nemesis and causes trouble for the cat. He is killed when Tom fools him into drinking poisoned milk and is later used as one of his many puppets.

Jerry Mouse is one of the main protagonists in Tom and Jerry. He is the nemesis of Tom and is often seen torturing and annoying Tom. In Tails Gets Trolled, his name is spelled as Jarry on one occasion.

Used by Tom. A large bulldog with a red coat and hat. Attacks a troll in Chapter 13, page 17.

Spike the Bulldog is a friend of Chester the Terrier from the Looney Tunes franchise. He hunts down Sylvester but is unsuccessful in his attempts.

Also used by Tom. A gray bulldog with a red spiked collar. Has a bleeding, red eye and a hole in his chest.

Spike Bulldog is a character appearing in the Tom and Jerry cartoons. He is somewhat of an antagonist to both Tom and Jerry (though moreso towards Tom than Jerry). Jerry often pranks Tom into interrupting Spike's quality time with his son, Tyke, causing the dog to beat up Tom violently.

Used by Tom. Is the son of (Tom and Jerry's) Spike. Has a similar red spiked collar like his father.

Tyke Bulldog is a character from the Tom and Jerry cartoons. He is Spike Bulldog's precious son.

Used by Sylvester. A large yellow bird whose ribcage and intestines can be seen through a hole in his chest. Strangles a troll and squeezes him hard enough that he explodes.

Big Bird is a character from the children's show Sesame Street. A large, naïve bird, he is sometimes seen as being the "child" of the adults appearing on the show.

Used by Sylvester. A giant chicken whose beak is partially cracked and has parts of his neck exposed. Slashes and kills the hacker troll in the beginning of Chapter 14: puppet battle, on page 4.

Ernie the Giant Chicken is a character appearing in Family Guy. He is an enemy of Peter Griffin, one of the show's lead characters. After giving Peter an expired coupon, the two become bitter rivals and they frequently engage in long, epic battles, resulting in the destruction of their surroundings.

Used by Sylvester. A giant rooster with his brain partially exposed.

Foghorn Leghorn is a Looney Tunes character. He is a mischievous rooster, often teasing on pulling pranks on other characters within his shows.

Used by Sylvester. Consists of Skipper, Kowalski, Rico, and Private.

The Penguins of Madagascar are a set of characters first originating from the film Madagascar before gaining their own spin-off movie and eventual Nickelodeon series.

First appears in Chapter 9: fuds choice, already killed by Sylvester sometime before. Is destroyed by being stepped on by a troll in Chapter 14: puppet battle, page 5.

Tweety Bird is a character from the Looney Tunes franchise. He is Granny's prized pet and is often hunted by Sylvester the Cat, who tries to eat him.

Extremely fast bird that is taken by Coyote after Shadow kills him with a headshot. His speed is his biggest weapon, proving to be of great use to Coyote during his fight with Demaro.

Road Runner is a staple character of the Looney Tunes franchise and is known for always having the upper hand against Coyote's plans to catch him.

Used by Coyote as he attacks Troll Fortress. As he sends Magma Garry to the roof, these birds fly out and scout the interior of the castle. Each individual bird is controlled by Coyote, who states that it is difficult to control every bird flying due to not being familiar with the inner mechanisms of flight.

Used by Coyote. Appears as a tree with a face on it. Is immediately recalled by Coyote to troll Demaro.

Its full name is "Mightis The Guardian of the Forest" according to Embergram (who also revealed further, currently unrevealed details regarding Mightis, which can be found here).[1]

Used by Coyote. Appears as a group of four with one being killed shortly after appearing by Miladox, and later appears as a spirit to mourn his "sexy ass body". They have the ability to throw bombs at enemies.

The Poppy Bros Jr. are reoccurring enemies in the Kirby series. They grant Kirby the bomb ability.

Used by Coyote. A pair of black and white snakes that were feared by many, according to Coyote. They were captured by Coyote some time before the events of Tails Gets Trolled and are used in battle against Demaro. They have the ability to perform a mesmerizing dance to throw off one's vision, a trick used on Coyote when initially capturing them and on Demaro. They can also create a strong gust of wind (known as the Forest ChamBers) capable of lifting Demaro and Dusk Hunter in the air, immobilizing the latter. They are also used additional scouts for Coyote, who had used his strings on the snake's eyes and ears to be able to see and hear what they can.

Used by Coyote, after Garry is killed by Miladox, his soul is taken by the guardian. Coyote is then able to free his soul and takes it to his book instead, and gains control over Garry's abilities, including summoning his magma armor.

First appears in chapter 9: fuds choice, Page 21. He is a large demon, capable of holding Kelic in his hands and crushing him in two. Demaro later claims during his battle with Garry that he was fed to his newer monster, Dusk Hunter, although this turns out to not actually be the case when Demaro summons him out of desperation against Coyote in Chapter 23: The conclusion - Part 3, Page 18.

A large, bull/ox like creature with immense physical strength and speed. Being a guardian, Dusk Hunter is possibly one of the strongest puppets a neutral can take control of besides Mightis, who Coyote claims to be even more powerful. 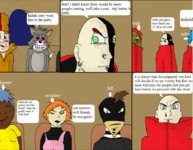 Deceased Satanists who failed the blood trial to become neutrals. Their corpses were then taken and used by Kelic. 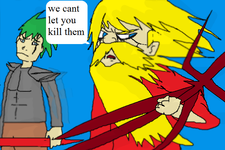 Satanists that showed up during Chapter 9: fuds choice to fight the Christians and died in the process. Their corpses were then taken and used by Kelic. 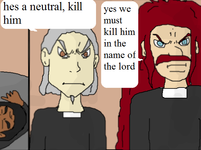 Christian Pastors that showed up during Chapter 9: fuds choice to kill Porky and died in the process. Their corpses were then taken and used by Kelic.

Not to be confused with Henry, the Reporter Troll.

A deceased Pastor that was once acquainted with Porky. Porky attends his funeral and accidentally triggers his Neutral powers, bringing him back to life in front of many bewildered Christians.