Coyote's Wrath is the 24th chapter of Tails Gets Trolled. 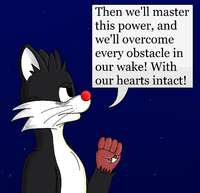 Sylvester making a promise with Coyote.

The chapter opens with a flashback to the second night spent by the newly created Neutrals following the fateful events that would change the lives of Coyote and his friends. That night, Coyote speaks with Sylvester regarding their current situation. Sylvester reveals that he had retrieved the corpses of Porky and his family from the Satanists. He also reveals that he had inserted his strings into the other characters, a fact that is no surprise to Coyote. It is revealed that the two have been practicing with their powers, discovering new tricks and abilities to use.

Coyote mentions that since the death of Porky, Fudd and Tom have gone silent and that a devide between Coyote and Sylvester has grown. Coyote laments this divide, and suggests that he and Sylvester should speak more. Sylvester reveals that he feels that he and the rest of the group are responsible for driving Porky to suicide and that the "gift" of becoming Neutrals is their punishment. He then lashes out at Coyote for not being responsible, but calms himself before his life force is drained. Sylvester then ponders over the future of their group and the difficulties in maintaining emotional neutrality that lie ahead.

Sylvester then makes two promises to Coyote: one to find a way to remove their "gift" of Neutrality, and one to train Tom and Elmer (who are seen as the weaker of Sylvester and Coyote) to become stronger. Coyote becomes emotional at seeing Sylvester's drive and begins to tear up, losing a portion of his lifespan in the process before giving Sylvester a thumbs up, showing his approval.

The scene then moves over to Hulk, who is seen purchasing some Wonder Bread. The cashier asks Hulk about his love life, who replies that he is waiting for the "right one". Hulk then leaves to do "Troll Slaiyer shit", as the cashier admires him from a distance.

The scene shows what's happening with Troll King and his group as his group fools around, this makes him berate them as he hears a branch snap. He then berates the trolls again, causing Eddy to mock him and beg for money to get candy. Hearing this, Troll King socks him in the mouth and knocks out his teeth. He then grabs his head and throws him at the tree Alex is behind, and Eddy gets ripped in half. Alex, seeing this, lies that he was trolling a lizard as he squishes it. Troll King asks why he is there, and after receiving his answer tells Alex to leave. Travous enters and tells Troll King that he found nothing, causing Troll King to threaten him with death. Travous persuades him telling him Mr. Clair would get angry at him for it, gaining permission to get rest. Then, General Plastro enters and informs the Troll King that Troll Fortress is under attack. Troll King is infuriated and rushes to his fortress to deal with them. The trolls get ready to help strike the attackers as Ronald commentates on the situation.

It then cuts to Elmer Fud and Luigi who are insulted by a troll. Luigi throws fire in his face and ask him to never call him stupid so many times again. Elmer Fudd then runs off. It cuts to tails, who is hiding and trying to be as stealthy as possible. He then drinks swamp water from a pond. At the Defenders' Base, Dexter and Vivian talk about Hello Kitty and discuss monitoring Tails through the night. Tails is interrupted by a fox in the swamp and goes back to drinking his water as he gets scared by a crocodile and runs off. In a flashback, Tails is being taught by Amy on ants and their nature as Amy slowly degrades into a deformity of her self and tries to kiss Tails. Tails tries to pull her off as he wakes up from his day dream struggling for air.

The Battle of Troll Fortress

Mean while, Rob, who is now riding on his dragon Helgrim, continues his battle with Hindo, who has ascended to a new form in which he can generate black lightning. Rob and Helgrim then see a badly injured Blaze climbing up a ladder. They go in closer to Hindo to stop him from attacking Blaze, only for Helgrim to be struck with Hindo's lightning. Helgrim explains to Rob that while he's slowly dying he will attempt to make it to Blaze and urges them to escape as "Rob can not win this battle". Helgrim makes for Blaze's location as he bleeds out, as Hindo brags about his accomplishment in slaying "another" dragon.

Elsewhere, Mauller is seen raising a barrier, having blocked an incoming attack. Admitting that the attackers are powerful, he makes his way for Troll Fortress to aid in the defense of the castle. However, as he is climbing up top, he is ambushed by Magma Garry / Coyote. Coyote, using Magma Garry, spews lava on Mauller. On the top of the castle, Hindo prepares to finish off Rob. Blaze, arriving just in time, attempts to stop Hindo by launching a fireball at him, momentarily distracting Hindo. Unfazed, Hindo prepares to finish off both and fires lightning at the two, but Rob and Blaze are suddenly shielded by a barrier of strings forming around them. 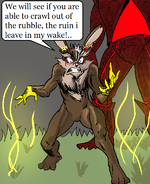 Coyote as he begins his attack on Troll Fortress.

Rob and Blaze are lifted into the sky and placed in an orb of golden strings. Golden strings appear around Hindo as he is tied up and lifted higher into the air by Coyote, launching himself from the ground. Coyote then spins before hurling Hindo through the roof of Troll Fortress, causing mass destruction before landing on the grass outside. As he lands, his golden strings become red and his eyes become black with red pupils (similar to Demaro's) as he sits to focus on controlling his corpses. Coyote passes his book to Magma Garry and sends him to the roof, where he unleashes an army of birds to search the insides of the castle.

Inside, Magma Garry makes his way to the morgue. Coyote searches through the room, adding two corpses and Sonic to his collection. 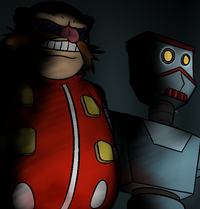 Meanwhile, Fudd and Luigi continue to make their escape from Troll Fortress. Fudd suddenly kneels and screams in agony as he experiences another one of Eggman's memories. Eggman is shown in a dark room alongside his robot assistant M-19, overseeing a terrifying operation being done on Sonic. Eggman gloats, claiming that Sonic will surpass his father's creation, Shadow before ordering M-19 to patch Sonic back up and insert a tracking device into him. Back inside Troll Fortress, Heimerdinger hides himself inside the laboratory after hearing all the commotion. Magma Garry enters the room, who Heimerdinger mistakes for being the actual Garry. He reasons that he might be able to convince "Garry" to help him escape as thanks for creating the android clone and leaps out to speak to Garry. Unfortunately, Magma Garry forms a blade using Coyote's strings and pierces Heimerdinger through the face.

In the skies above, Rob and Blaze begin to chat as they are held inside Coyote's string orb. Rob questions Blaze as to why she would come back for him, to which she replies that no one should be left behind. In this conversation, Blaze also reveals that she had known about Rob's ability to read lips. She reveals to Rob about her dead sister, who had been lost in another one of Eggman's vile experiments.

In another flashback, Eggman is shown experimenting on a dead animal, cutting through its head using a scalpel. Declaring it to be a failure, Eggman orders M-19 to take it away. M-19 carries the corpse, passing by a holding cell labeled "Viable Objects", containing the likes of Sonic, Knuckles, Blaze, Silver, and Sonichu. On its' way to the "Unviable Objects" section, M-19 passes by a wandering Shadow who rages at the robot momentarily. In the "Unviable Objects" section, M-19 hangs up the corpse next to Vector, Espio, and Cream. Vector begs M-19 to let the group go but is ignored before M-19 fetches another body. Blaze, while captive, momentarily regains consciousness and screams as she watches M-19 drag her sister, Pyro, away. Back in the present, Blaze tears up as she recalls the screams of her younger sister. Blaze then explains to Rob that there are bombs placed inside the viable specimen that can explode if the robotic parts of them are damaged before passing out.

Elsewhere, Coyote continues his search of the castle for Fudd, sensing Fudd's corpses. The scene then moves back to Elmer as he and Luigi continue to run. Once again, Fudd falls to his knees and holds his head in pain as another memory comes to surface. The marks on his hand also separate as he expresses extreme emotion. In a dark room, Eggman is shown looking over the body of Amy. Eggman makes preparations as it is revealed that Amy is pregnant and on the verge of giving birth. Eggman stares into Amy's vagina and smiles and he prepares to extract the baby. After screaming in pain, the baby is delivered and Eggman holds him in his hands as he stares at his father. Fudd, confused and in complete shock, then comes to the disturbing realization that he has a son.

Fudd recalls another one of Eggman's memories.

The scene briefly shows a figure emerging from a trapdoor somewhere outside before Tails is seen, still suffering alone in the Cocoa Jungle. He shakes incects off of his body before coming to another disturbing realization that he must take a shit alone in the woods. The scene then moves to Coyote, who enters the last unexplored room of Troll Fortress, the Ice Chamber's. Magma Garry enters and immediately slashes The Man in the Ice in half. As Coyote ponders over what he has found, he is suddenly alerted as Road Runner moves to block an blast. Unfortunately, Road Runner is completely decimated and Coyote is injured by what appears to be bullets. The camera then moves to show a Chaos Emerald powered Troll Face staring down Coyote with Fudd's 2nd cock.

Super Troll Face elbows Coyote in the face and dodges his attacks with poise. Sonichu then suddenly appears, revealing himself to be in cahoots with Troll Face and continues the attack, trashing Coyote and launching him into the air with a series of blows. Super Troll Face takes aim at Coyote and shoots but Coyote raises a shield to deflect the bullets. Enraged, Coyote raises his arm and forms a spear of strings from Road Runner's remains. Sonichu is then impaled through the gut, damaging the bomb within him. A massive explosion then engulfs the battlefield.