Elmer Fudd (usually referred to as just "Fudd") is one of the protagonist characters featured in Tails Gets Trolled. He is a member of The Neutrals.

Elmer Fudd is a white man wearing a brown coat with a similarly colored brown/burgundy hat. He wears pants matching his coat, and burgundy colored boots.

Fudd is first seen meeting up with his fellow Looney Tunes characters as they plan to go out drinking at a bar. At the bar, the group gets wasted and Fudd spends the night singing songs and puking. The group loses the keys to their ride home and drunkenly wander into a ritual, where they then drink the blood of a demonic god, granting Fudd and his friends the powers of necromancy.

The next day the group meets up and discusses their newfound powers. Porky leaves for while, distraught over the fact that he had cheated on his wife the night before. When he returns, he is being pursued by a group of Christians looking to kill him after discovering his powers. Coyote urges the group to run, and leaves Fudd with the choice of leaving Porky or running away. Fudd chooses to escape, leaving Porky to hang himself after seeing his family be killed. That night, Fudd bleeds after refusing to use his powers for the day.

The next time Fudd appears in the story is during the standoff between The Troll Slaiyers and The Trolls during Chapter 2, when he appears looking for Bugs. He watches the conflict play out and collects the bodies of Bugs and Daffy after they are killed by Shadow, and leaves off screen with Silver and Rob. He and Rob then accompany Silver on his quest to infiltrate the Troll City.

The group disguises themselves using troll face masks. Fudd watches as Silver defeats the Underbite Troll in a troll-off, and the group eventually makes their way to the Troll King's castle. Silver introduces Blaze to the group who Fudd flirts with before Silver sneaks into the castle alone. Some time later Fudd and the group see Silver running away from the trolls and provides assistance in helping him escape. Fudd fires a smoke bomb which gives the group time to escape, later taking shelter in Underbite Troll's house. 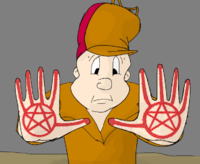 Fudd reveals his powers of necromancy to the group.

The day after, they are awoken by trolls who are hunting Silver. Fudd wakes up confused and the trolls kill Markus (Underbite's friend) to threaten him. Fudd then reveals his powers of necromancy and reanimates Bugs and Daffy. He then eats their brains and gains the memories of the two gay lovers before using them to fight the trolls off and escape. As they are fleeing, however, the group is ambushed by Hindo who proceeds to capture Fudd.

While in captivity, the Troll King threatens to cut off Fudd's dick if he does not reanimate Eggman, who he needed alive to figure out how to create an army of troll robots and possibly reanimate the Man in the Ice. Fudd reanimates Eggman and then eats his brains, becoming a super genius and learning of Eggman's plan to free Heimerdinger (and later, his memories of repeatedly raping Amy).

Some time later, after formulating a plan with his corpse army, Demaro wanders into the lab and finds Fudd. He states that he will kill Fudd to get his brain so that he can kill his arch-nemesis Coyote, but is stopped by Hindo. During the commotion, Fudd manages to escape while Hindo is distracted. While escaping he makes his way to the morgue and discovers the corpse of Luigi, who he reanimates and uses to help fight his way out. As he's running with Luigi, they fall and he remembers Eggman creating Sonic in his lab and decides to keep going before remembering another thing.

After collecting himself, Elmer continues his escape but pauses once more as he recalls another memory.

This time, the scene moves to a dark room where he sees Eggman and Amy. He then witnesses a horrendous scene of Amy giving birth to a half-human half-hedgehog child as Eggman watches in excitement. Elmer looks on in horror in the present as his memories begin to be mixed with Eggman's, and mistakingly declares that he has a son.[1]

Fudd can be quite dumb and absent minded at a glance as seen when he is easily convinced by Shadow to turn his gun on the trolls after joining them during their stand-off. He also rarely pays attention to what is happening around him, much to the annoyance of Silver when trying to explain his plan in Chapter 6, or when he assumes that Silver is playing tag with his pursuers later that chapter. However, he can prove to be quite crafty when needed, though this may be due to him consuming the brains of other individuals and gaining their knowledge and experience. Fudd also appears to have quite a hard-on for Blaze and flirts with her the moment they meet, annoying Silver once more. After consuming Eggman's brain, he becomes incredibly intelligent and provides Troll King's forces with useful intel and tools, such as Hindo's shock gloves or Garry's robot clone.

Fudd is capable of using his shotgun with ease. He has used it both to attack trolls and fire smoke bombs.

Being a Neutral, Fudd also has access to the powers of necromancy. He is able to use the corpses of Daffy and Bugs to fight for him, and later, acquires Luigi's to assist him. After consuming Eggman's brain, he gains access to the scientist's incredible IQ and memories, making him a valuable asset to the Trolls. 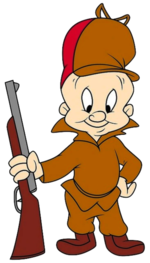 Elmer Fudd (first known as "Egghead" before becoming the character he is known as today) is a hunter known for his often unsuccessful attempts to hunt Bugs Bunny and his tendency to replace r's and l's with w's. He is also a law obeying citizen who obeys the law and only hunts during hunting season.

In Tails Gets Trolled Fudd is more effective at using his gun compared to his original counterpart, and has shown his prowess multiple times. Also in contrast to his original form, he is not quite as law obedient as he was before, and is willing to kill trolls to protect his allies if necessary. He also appears slightly taller than his cartoon appearances.

As one may expect, Fudd is not capable of necromancy in the original shows as he is here.