Skat and Fluttershy are a pair of characters appearing in Tails Gets Trolled. They are noted to be a bit of a nuisance to The Defenders by constantly intruding on them.

Skat is a slender human, wearing a black shirt and pants. Fluttershy is a yellow horse with a pink mane/tail, and large black eyes. She is usually seen drooling as well.

As noted by Cheeto Man, Skat and his steed have made repeated visits to the Defenders' Base in the past. As he explains, there is not much the Defenders can do about his presence due to Fluttershy providing a means of escape for Skat.

Skat and Fluttershy are first seen when the weed party begins in Chapter 18: The eye of the storm. He appears watching the group outside a window, hailing Hitler and proclaiming that he is gay in German. Cheeto Man advises the group to ignore him, and the party continues. Later on, after Amy, Knuckles and Tails leave the hottub, Skat and Fluttershy appear inside the base making out. Skat then suggests having sex to Fluttershy, to which she agrees. The two begin to make love but they are interrupted by a panicked Spyro stepping on Skat's head as he rushes over to find Cheeto Man and Tails.

Skat has a strong love for his horse, Fluttershy. They appear to have been together for a while, judging from Cheeto Man's comments. His love is strong enough that he is shown attempting to have sex with Fluttershy during the weed party.

Fluttershy appears to be airheaded and/or mentally retarded as she appears to struggle with speaking actual sentences. Much of her dialogue appears non sequitur, though it is unknown if this may be a result of not being able to understand Skat's language.

Skat himself does not appear to have any particular powers of note. His horse, Fluttershy, however, is stated to be the reason why none of the Defenders are capable of catching him. How exactly she is able of doing so is unknown. 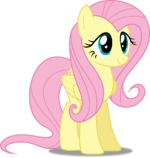 Fluttershy is a character from the My Little Pony series. She is one of the main characters of the show known for her kindness.

She is able to speak coherent sentences in her main show, however, she is seemingly unable to do so in Tails Gets Trolled. Most of her lines trail with "Derrrr..." or other strange noises. Fluttershy also seems to be a regular horse in TGT rather than a pegasus, as she doesn't have any wings.