The Trix Rabbit is a cartoon rabbit who appears in commercials for the sugar cereal brand Trix, appearing as a member of The Defenders in Tails Gets Trolled. His constant failures to attain the cereal has lead to him being driven insane, often repeating "trix are for kids" to himself, or demanding to know where the Trix is. Knuckles reveals later that he sells children for sex to help fund the group behind the scenes.

The Trix Rabbit is a anthropomorphic rabbit. He is seen having all white fur and a pink snout. Trix Rabbit's eyes are mismatched in size, possibly done to emphasize his insanity.

Not much is known about Trix Rabbit prior to joining the Defenders, other than what other members have said about him. Ronald McDonald states that in the past, Trix Rabbit was constantly trolled by children claiming that Trix are for kids. This eventually drove the rabbit insane due to constantly being denied his precious Trix.

Trix Rabbit first appears when Tails is kidnapped and questioned by Doug and Skeeter. He asks if he can help get Tails to speak but is quickly told to go away. The next time Trix Rabbit is seen is when Tails moves to train with Ronald after finishing up with Vivian. Ronald explains why Trix Rabbit refused to train Tails and explains that rabbit's story to the fox and how he has developed trust issues as a result. Trix Rabbit screams about wanting the Trix before hopping away nude (another quirk that he developed over time, according to Ronald.)

After Ronald finishes training Tails and attempts to attack him, Trix Rabbit appears alongside Hello Kitty and Kermit when they rush in to see what had happened. Trix Rabbit screams about how Ronald must have stolen his Trix before Kermit tells him to settle down. He is not seen again until a flashback where Knuckles explains to Tails his true purpose of being in The Defenders, which is to sell children off as sex slaves.

Trix Rabbit has not displayed any physical abilities thus far. It is unknown if he has any powers of note due to him refusing to train with Tails.

Trix Rabbit is a crazed individual, often screaming madly about his Trix cereal. He is obsessed with the cereal and accuses others of stealing his Trix. The children's constant teasing has also left a mark on him mentally, as he often repeats the classic slogan "Trix are for kids" in his inane rants. 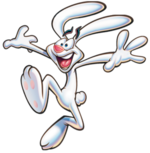 Trix Rabbit is the mascot for the cereal brand, Trix. He is often seen in the commercials attempting to trick children into giving him a bowl of Trix.

Trix Rabbit's obsession with the cereal has been taken to an extreme in Tails Gets Trolled. He has been driven mentally insane due do being denied his Trix for so long. The Trix Rabbit also does not sell children into sex slavery in the original commercials.