The Underbite Troll is a character in Tails Gets Trolled and later promoted to be the star of his own spinoff. Unfortunately, before he can do much good, he and Markus are killed via decapitation and a shot to the head respectively.

This is later confirmed in his later appearances during Chapter 25: Wicked Influence and on later pages of The Adventures of Underbite Troll.

Who Trolls the Trolls?

Sometime before the events of Chapter 1, Butter Tits and The Dick Taker were spreading rumors that he and Markus were gay. In response, the two agreed to troll them into submission. After kicking Butter Tits in the testicles, the duo attempted to enter the Troll Off under the name "Underbite Squad", only to find out that Butter Tits and his associate had taken the name out of spite. Enraged, Underbite Troll decided to name the duo "BiteUnder League".

Next morning, Markus arrived with two female Trolls, much to Underbite's discontent. Acting under the assumption that they were here to steal he and Markus' belongings, he soon changed his mind when they started sarcastically humoring him about the size of his genitalia. He begrudgingly let them stay and continued to be suspicious of them for the rest of his comic's tenure. 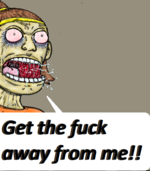 Underbite Troll lets out his shock and hatred for the Crue.

Later that day, Underbite and Markus went to the Troll Off arena, where he would witness the tournament registrar, Mingus, commit suicide. He watched the suicidal troll jump out of a building, betting his bones disconnected and body penetrated by glass. After calling out and being refuted by Master Queef, he started to blame himself for what happened to the man. However, he and Markus came to the conclusion that it was all due to the troll's cat and his owner's corruption as a result of his strong desire to have sex with it.

Worse so, Underbite Troll and Markus witnessed the Fist in Poo Clan molest a rabbit by peeing on it. The two confronted them about this, however, Underbite's eyes were urinated on as well, which sent him into a fit of rage. These events would motivate the two at the Troll Off. During the Troll Off, the BiteUnder League would once again face the Fist in Poo Clan, easily defeating them in a troll off. Underbite's roasts were so impressive that even Troll Face was impressed. They briefly encountered their next opponents, Bill and Dill of the Fantasy Starwars Crue, who taunted them for their lack of Star Wars paraphernalia. Despite his victory that day, things would change for the worse. When the League arrived home, they were met with Sirpigsalot and Mysushi, who had entered their home without their knowledge (with the former cumming as he fantasizes over hentai). The two intruders explain that they are good at breaking into houses, and Underbite Troll begrudgingly agrees to forming a truce so that they can gather intel on their competition for the troll off. The group decides to set off an infiltrate the home belonging to the Panda Utters in order to determine where they're allegiance lies.

The four break into a house and snoop around, until Underbite Troll finds a cum-stained computer with pictures of him on it. Not long after, the owners of the home are revealed o be none other than the Fantasy Star Wars Crue. Bill and Dill returned home from an argument with an unidentified individual about who would win in a fight between Darth Vader and Superman. The two, especially Bill, tried to get his affection, comparing Underbite to Princess Leia. This caused Underbite Troll to jump out the window in disgust. The group manages to escape but not without injuries. The next day, things return to normal and Underbite Troll and Markus submit a poster for the Troll-Off.

One Final Troll Off

An indeterminate amount of time later, the BiteUnder League were once again seen hanging around Jayce. There, he would meet Silver, Fudd and Rob and would change the first of the three to a troll-off. After a lengthy battle, Silver won; earning the respect of Underbite Troll and Markus. As a reward, the duo let Silver and his pals (later joined by Blaze) stay at their home for a while. However, this wouldn't last for long, as their house was raided by a squad of trolls lead by Jacko the Troll, resulting in the death of him and Markus via gunfire and decapitation respectively. Although they were almost immediately forgotten by Silver and his gang, he and Markus' "sacrifice" allowed them to escape and later storm Troll City to save Elmer Fudd.

Underbite Troll later reappears in The Underworld as one of Satan's slaves. He is shown mining for obsidian and recognizes the newly enslaved Hindo and the two strike up a conversation. He is shown to dislike The Underworld and complains about a voice in his head, to the surprise of the crazed Volunteer who joins their mining session who states that even though he has been in Hell for longer, he has not heard any voices in his own head.

Underbite Troll and Markus are shown to have some feelings of remorse and care despite being members of the trolls. They take offense to the actions of some of their "fellow" trolls and even partially defect from them. When under stress, Underbite Troll would often come up with ridiculous explanations for what was going on (such as cats being evil demonic creatures).

He also has some "admiration" to Adolf Hitler, substituting his name in expressions certain expressions (ie, Hitler damn it) as seen in his spin-off comic. 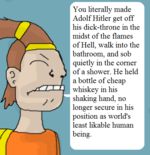 Though he wasn't a major character at first, he was popular enough to get his own short-lived spinoff series, one which would introduce many side characters such as PandaUtters, Mysushi, Sirpigsalot, the Fantasy Star Wars Crue, Master Queef and others in addition to elaborating more on the daily life of the Trolls and expanding on characters that previously had little to no development. Most famous of all, though, was Underbite Troll's infamous insult from Chapter 6, in which he proclaimed that Silver was worse than Adolf Hitler. This, though not as widespread as Unsettled Tom, became a somewhat popular meme and might have contributed to Underbite getting his own spinoff series.