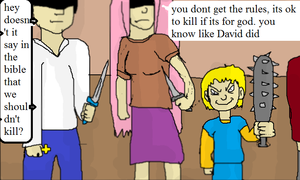 Christians gathered at a church.

Christianity is a religion held by some characters in Tails Gets Trolled. Its followers are known as Christians, or alternatively spelled as Christains.

The precise origins of Christianity are unknown, but the religion appears to have been present for a long time. Followers of the Christian faith are known as Christians. The Christians played a role in creating The Neutrals by combining the blood of an angle and a hell hound, and used them to battle the Satanists for "sentry's" until the Neutrals were extinct. Following the apparent wipeout of the Neutrals, the Christians focused their efforts onto recruiting more members of their religion, according to Kelic.