Chapter 25.5: Wicked Influence Part 2 is the 25th and a half chapter of Tails Gets Trolled.

Welcome back to the house of God

Brogan looks at the church members and selects one to be killed.

The scene then moves once more to the house of God, where various characters previously seen in the backgrounds of Chapter 9: fuds choice, have gathered to pray for the fallen. Among the group are Boah and Alice, who have come to pay their respects as well. As the group prays, Sinu and Minion begin their visit to the house of God by entering through portals. Sinu orders Minion to slay Sister Fister as she speaks out before beginning his questioning of the other church members. As he speaks, he reveals that he had planted two spies in the group, who reveal themselves to be Chris Chin and Evangeline. Chris then begins explaining to Sinu what had transpired, stating that the church is responsible for the death of Bjorn and that they were unable to find out the truth behind the fountain's destruction. After a brief interjection and moment of extreme violence from Brogan, who had refused to believe that Chris was a spy, Sinu then orders his group to burn the church down to ashes. As Chris and Evangeline summon molotovs, Kit and Narrow suddenly enter the scene from a window. Sinu reveals that Narrow is one of Mr. Clair's legendary birds, and in exchange for sparing the remaining church members, Narrow offers to leave with Sinu. (Mike Power also enters the scene, shocking everyone, but is ignored.) Kit begs to go along with Narrow but regardless, Sinu leaves through a portal with Narrow. The remaining survivors, consisting of Chad, Gene Jorts, Boah, Alice, Mike Power, and Kit, leave the church as it burns.

The scene then moves back to Troll King's group at the ruins of Troll Fortress. In the distance, Heimerdinger emerges from the rubble, confused as to how he survived. Before he can speak any further, Zaygar emerges from a portal and entraps Heimerdinger within a barrier. Troll King hopelessly tries to attack Zaygar using his Rope Spear magic, but fails to stop Zaygar from taking Heimerdinger. He then slams the ground in a rage as Mauller watches.

Meanwhile, the scene moves back to the Underworld, where Jackal is shown brining Hindo to the obsidian mines. He orders Hindo to pick up a nearby pickaxe and begin mining and whips him to motivate him into working. As Hindo moves to some rubble, a nearby slave, revealed to be Underbite Troll, recognizes Hindo and the two begin to talk. Underbite Troll states that the Underworld is not super killer and reveals to have a voice in his head as the two work and try to ignore a crazed volunteer rambling nearby.

The scene then moves to Tails, who has climbed up onto a tree and is attempting to rest for the night. He is visited by Vivian who provides words of encouragement and speaks with him about his current situaation. Vivian explains that most of The Defenders are not allied with Cheeto Man and asks for Tails' help in freeing the Defenders from his grasp. Vivian also reveals to Tails that Spyro and Hello Kitty are being punished for their actions and are chained in a well for punishment before leaving Tails with a backpack made by Pacman containing instructions from him as well as supplies needed for survival. 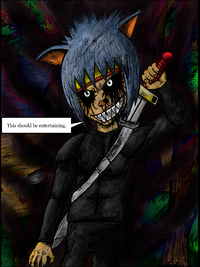 Pori emits a wicked aura as he becomes excited.

The scene briefly moves back to an exhausted Coyote, now landed in his book. Demaro is shown passed out nearby while Garry's ghost reveals his plans of revenge. Meanwhile, in the Underworld, Satan is shown with Kryzeal, and instructs him to call forth the hounds. In the real world, a chilling roar is heard as the ground shatters and hell hounds emerge. In a nearby woods, Pori is seen with a troll entourage hunting Silver. The trolls panic upon hearing the roar, with one member (known as FabGhettoZuko) fleeing. As the others panic, Pori smiles and becomes excited as a shadowy aura forms behind him.

From a distance, Silver watches as Pori turns to face their group and he steels himself as he realizes there is no option but to fight. Tom stands and asks Rob to guard Blaze's unconscious body while Silver and he battle. As Silver and Tom emerge from their hiding spot, Tom briefly recalls events from Chapter 9: fuds choice, revealing that he had played a role in Petunia forving Porky for his actions by having sex with her. Silver, Tom, and Pori's group then rush at each other, exchanging blows. Tom manages to hold his own against the trolls and disarms Perky Jackson of his gun while Pori slashes Silver's face. Silver musters his strength together and pushes Pori away while Tom slays Perky Jackson and Jasper. The remaining troll, Hogwart, begins to plead for his life and is spared by Tom.

Meanwhile, Pori is seen alone. He is then ambushed by a hellhound, which he kills with a single slash of his sword. Kryzeal then approaches and forms a spear, aiming it at Pori. Pori evades as the spear explodes on the ground nearby and deflects Kryzeal's attempt to attack him. Kryzeal then calls upon Satan's name to grant him strength and slashes Pori across his face, tearing a portion of his skin off. Pori, however, is able to continue fighting unharmed and tears through Kryzeal with a series of sword slashes. Pori's skin then regenerates, covering up his exposed flesh as he smirks over Satan's attempt at killing him.

The scene moves back to Tom and Hogwart. Hogwart, claiming his bones are broken, has troubles lifting himself up from the ground. Silver states that carrying him would slow the group down and once again urges Tom to kill Hogwart. After some back and forth, Tom eventually decides that Hogwart must die and aims his gun at the man. Hogwart pulls out a photo and clutches it close to his chest, when a Hell Hound (and Rob) are suddenly seen approaching from behind.

Hogwart cries out to Rob, warning him of the Hound behind him. He then reaches for a rock and tosses it at the Hell Hound, gaining its attention while Silver and Tom look on in fear. The Hound ignores Rob and runs to Tom and Hogwart's position. Tom aims his gun at the Hell Hound and fires a round of bullets, but the bullets are shown to be ineffective as the Hound is unharmed and stands menacingly before Tom. As the Hound sizes up Tom, a second Hell Hound emerges from behind Silver. Silver raises his arm to try and hold the hound in place but as his arm is raised, the Hell Hound manages to bite off his hand completely. Despite this, Silver is still able to restrain the Hound near him. 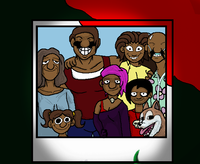 A photo of Hogwart's family.

As Silver confronts one Hell Hound, the other by Tom slashes at the cat, destroying his gun as Tom is knocked to the ground. Hogwart approaches the Hell Hound but is then killed as the hound leaps through the air and lands on him, ripping his spine out using his teeth. The photo held by Hogwart falls to the ground, revealing that he had been telling the truth about his family situation. The Hell Hound then approaches Tom and the two stand before each other.

Tom and the Hell Hound.

As Tom stands face to face with the Hell Hound, he begins to recall the moments when he had entered Petunia's home to reluctantly have sex with her in exchange for her returning to Porky. The scene moves to the two in a dimly lit room where Petunia rides a deadpan Tom while Porky Jr. watches from his crib. Tom muses to himself, blaming everything that had happened after the fact on him and his own actions. In the present time, Tom then steels himself once more and rushes at the Hell Hound, enduring a claw attack and landing a series of blows on the Hound. The Hell Hound then manages to strike Tom across his chest and sends him flying into a tree. As Tom looks on his injures in despair, he looks up and sees Silver and Rob's panicked faces.

In desperation, Tom throws himself onto the Hell Hound and urges his friends to escape and survive for another day. The Hound then begins to shake Tom off as he struggles to hold himself on top of it while Silver turns and attempts to move towards Tom. The Hell Hound then successfully shakes off Tom and as he struggles to gain his footing, the Hound opens its mouth and decapitates Tom, causing Rob to scream out in agony while Silver watches, horrified. Silver's pupils then white out as he screams and his fur becomes gold, granting him a burst of strength which he uses to lift both Hell Hounds and hurl a distance away. Moments after, however, Silver then collapses and passes out from exhaustion.

The scene briefly moves back to Tails, who manages to clean off his vomit from Pacman's package. Inside, he uncovers various supplies ranging from a watch, medicine, matches, and a telescope. He then pulls out Pacman's letter and learns of his plan to help overthrow Cheeto Man. Pacman states that the times ahead will be difficult but encourages Tails to hang on as The Defenders continue to help him train. As the weather changes to snow, Tails strengthens his resolve to fight Cheeto Man, and the scene moves back to Rob. Rob crawls towards Silver's position and attempts to wake him before the group is ambushed by another threat. As he speaks, however, white Neutral strings suddenly appear from behind the trees and grab Rob and Silver, in addition to the bodies of Blaze, Tom, and Sylvester away from the bloodied battlefield.