chapter 9: fuds choice is the 9th chapter to Tails Gets Trolled. In it, the story of how Coyote and his group gained their powers is continued.

Coyote and his friends stumble outside the bar, with Tom and Sylvester getting high on "cat nip". Inside the bar, Porky and the woman who had flirted with him previous finish their sexual encounter and Porky leaves, with the woman's bra still on his head. It is revealed that the woman had also stolen Porky's keys and his other belongings. 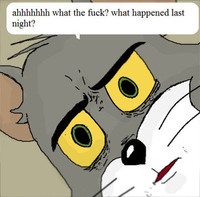 Now with the group, Porky and the rest drunkenly wonder where the keys to his car have gone to. With no car, the group wanders off and eventually makes their way into a church. The leader of the church, Kelic, invites the group to join their ritual of becoming Neutrals. Kelic explains the process, stating that they must first drink the blood of the hell hound and angle [sic] to test who is worthy.

After drinking, five members of the church die, leaving Coyote's group, Kelic, and Demaro. The dark god speaks to the remaining seven and marks their hands, granting them the power of the Neutrals. (Demaro's third eye also appears then.) Coyote and his companions then head out.

The next morning, Coyote wakes up hungover and proceeds to get coffee. Here, he notices the markings on his hand and deduces that he can control the strings appearing from his fingers. Meanwhile, at Porky's residence, his wife Petunia angrily storms into his bedroom and demands to know what happened the night before. After seeing the bra on his head, Porky tells the truth about what had happened and how he cheated on her. Shocked, Petunia leaves in tears, declaring their relationship to be over as Porky screams for her not to leave him.

Elsewhere, Tom wakes up, unsettled by the fact that he cannot remember the events of yesterday. While pondering he notices Jarry and proceeds to kill him using poisoned milk. Tom then notices the markings on his hand and remembers the ritual he and his friends took part in. He leaves to meet up with the others, eager to figure out what exactly he is capable of. Sylvester also awakens and accidentally uses his powers on Tweety Bird, reviving him from the dead, shocking Sylvester.

Later that day, the group sans Coyote meet up with Fudd to discuss their newfound powers. Porky desperately attempts to call his wife but she does not answer. Tom attempts to console him, but argues with Sylvester who is much more cynical, stating that it is unlikely that the two can get back together. Porky leaves and before the two felines can continue arguing, Fudd stops the two by threatening them with his shotgun. Elsewhere, Coyote meets with Kelic to learn the story of the Neutrals and how they were used in the past as necromancers made by Christians and Satanists to fight in their war. As the war between the two factions died down, so did the Neutrals, leaving only a select few alive. Coyote thanks Kelic for the "in tell" and heads off, with Kelic noting that Coyote has the potential to be the strongest Neutral to ever exist.

Meanwhile in the "house of god", Porky is seen attending the funeral of his pastor, Henrey. As he goes to the casket to pay his respects, he accidentally revives the pastor using his powers. Realizing he is a Neutral, the church then turns against him and declares that Porky must die. Porky hides in a alley's trashcan from the Christians and texts his parents, telling them that he will need to stay at their place for a while. Later, as Porky enters his parents home, he discovers bacon and their decapitated heads on the kitchen table with "hugs @ kisses" scrawled on it in blood. Elsewhere, their bodies are found brutalized with a cross and "G O D" written in blood above them. Porky screams, traumatized by what he had seen.

The decapitated heads of Porky's parents.

The scene then moves over to Coyote, who is now with Tom and the rest of the group. Coyote realizes that Porky is in danger if his Christian friends discover his powers, stating that they would be inclined to kill him to gain an advantage over the Satanists. Coyote urges the group to follow him, and eventually they meet up with Porky.

Porky rages, screaming about what has happened to him and blaming Coyote for his misery. Coyote bounces the blame back onto him, stating that Porky is the one responsible for his own situation due to being a pushover. Enraged, Porky punches Coyote and screams at him, while mentioning that he is going to kill himself now that he has nothing left. Coyote urges him to calm down, and think things through. After calming down, Petunia appears to talk with Porky. She apologizes for what had happened earlier and forgives him, stating that their baby needs a father.

As Petunia passes the baby over to Porky to change his diaper, Coyote notices something in the distance. A bullet flies through the air and pierces Petunia's head, flying through her and killing the baby in the process. As the two fall to the ground, dead, the Christians appear in pursuit of Porky. The Satanists also appear and the two battle. Speechless, Porky stumbles off, ignoring Coyote's call to run. Coyote then decides that they must leave without Porky. Fudd and Tom hesitate, and the choice is left to Fudd as for whether or not they should attempt to save their friend. Fudd chooses to leave, with Tom following him. Meanwhile, Porky uses his Neutral strings to commit suicide by hanging himself off of a tree branch. 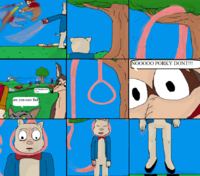 Tom angrily berates Coyote for seemingly not caring about their dear friend, but Coyote explains that to maintain their powers they must keep their emotions neutral. Later that night, Tom and Coyote are shaken and begin to bleed from their mouths and noses due to not maintaining their emotions. The group agrees to hide and gather bodies to use with their powers.

Back the the church where the group had gained their powers, Kelic destroys the fountain to prevent any more Neutrals from being created. He states that his talk with Coyote had made him realize how childish the whole war between the Christians and Satanists is and that he now seeks peace. He is confronted by Demaro, angry over his decision, due to wanting the fountain to create an army of Neutrals for himself to take over as leader of the Satanists. Kelic raises the corpses of the failed Neutrals, Christians, and Satanists to battle Demaro but he is quickly knocked down by Demaro's companion, Addy the Demon.