this page is a heavy work in progress 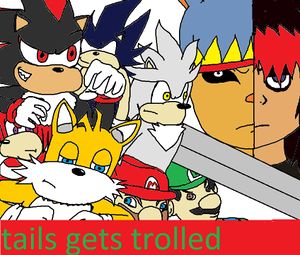 The cover of Chapter 1.

For the first chapter of the comic, see here.

Tails Gets Trolled is a webcomic created by Lazerbot. Originally released on 2011, it focuses on the titular character, Tails, being trolled which slowly leads to a series of events centered around revenge, multiple opposing factions, betrayal, necromancy, the clap, weed, romance, and more.

The story of Tails Gets Trolled begins with Tails being trolled in the first chapter. Tails and friends soon enter conflict with The Trolls and things begin to spiral out of control as they realize that there is much more going on in the world than a conflict between the two groups. Tails and his friends are separated in the ensuing chaos and are split into their own journeys (mostly) centered around dealing with the Trolls.

DeviantArt (historically stylized as deviantART) is a community website launched on August 7, 2000. It allows users to upload their own artwork, photos, videos, and stories to their profile, where other users can comment and critique them. This is the website Lazerbot would find himself on to upload his own works of art. The exact date when he created his account has been lost to time, but his first submission was uploaded on September 14, 2009. (insert shit about stuff he uploaded before tgt here). Eventually, in late 2011, he would create what later became the epoch of his magnum opus.

The first page of Tails Gets Trolled was posted on DeviantArt on October 10, 2011, at 3:17 AM Central Daylight Time, entitled "tails getting trolled". This first page that was uploaded depicts Sonic comforting a traumatized Tails, as Sonic explains to Shadow that Tails had gotten trolled, and they discuss their own particular methods on how to deal with trolls. The second page, and the first chronologically, was uploaded later that morning at 6:34 AM CDT, titled "tails gets trolled flashback", depicting the actual event of Tails getting trolled by Butter Tits and the Dick Taker. At some unknown point later, the page titles were renamed to be the second and first pages of the comic respectively, which is how they are known today. The third page was uploaded on the same day at 10:49 PM CDT, and several more pages would be posted throughout the next week, interspersed with Lazerbot's usual art submissions unrelated to Tails Gets Trolled.

The comic would stay in the sea of DeviantArt and would not reach the coasts of the Internet as a whole until it was discovered by the website Something Awful. On February 18, 2011, Something Awful user Nunez would post a thread[1] on the websites' GBS (General Bullshit) subforum about the comic. Many users reacted with bewilderment to the comic, reacting to the typos and crude artstyle of the comics with some people likening Lazerbot to the likes of Chris Chan due to both material involving characters from the Sonic the Hedgehog franchise as well as both authors appearing to be "abnormal" in the eyes of onlookers. 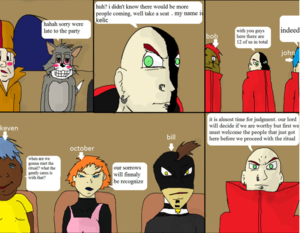 Keven drops a reference to Something Awful's word filter for unregistered users.

Despite this, the thread in general had a positive reception to the comic and went on to produce fanart of various panels and moments within the first few chapters. Said works became notable enough that the website as a whole put up a front page article[2] showcasing the thread, giving the comic more exposure. Lazerbot himself would take notice of the comic's newly found attention[3] and would occasionally slip in references to the thread itself within Tails Gets Trolled, such as using phrases from the websites word filter (most notably "gently caress," which replaces "fuck" for non-registered users, sometimes spelled as "gently cares" in the comic).

As time went on, however, Something Awful would then be viewed in a more negative light as two incidents occurred. People, not limited to Something Awful however, would become more critical of the comic around Chapter 12, criticizing the comic for its focus on OCs and long battle sequences. Additionally, after an incident stemming from a comment left underneath a drawing of Hello Kitty with Tails on DeviantArt, a heated discussion about whether or not said wording is appropriate or morally allowed transpired. These two incidents angered Lazerbot leading to him leaving several angry messages on his Facebook and ultimatelazerbot deviantart account, lashing out at the detractors, which in turn would spill into the thread itself. Much of the negative criticism would then be attributed to "SA users". From then on the thread would be seen in a more critical view from Lazerbot himself which would lead to negative references being made about Something Awful in the comic itself, such as Doug namedropping Something Awful during Chapter 18. This would culminate in a post made on the ultimatelazerbot deviantArt account[4] in which Lazerbot took different posts from the thread and replied to them giving his response back to specific "criticisms". Afterwards Lazerbot would not pay much attention to Something Awful itself (barring the occasional call out[5][6]).

From that point onwards, the thread would see less positivity and more criticism, which ranged from constructive to outright insulting at varying points, notably around Chapter 19 which was not well received by the thread itself due to the sensitive nature the arc covered. To this day the thread remains up and somewhat active.

Tails Gets Trolled consists of several Chapters going through the main plot of the series, alongside Side Stories, which consist of canon prequels, alternate timelines, or one-off joke comics.

todo: maybe make this its own page as it's quite long

The comic gained much of its notoriety upon being discovered by Something Awful, and a thread was created on February 18, 2012[7]. Many of its users expressed bewilderment at the rather bizarre and graphic depictions of Tails and friends being trolled and the ensuing chaos, leading to an article being made on the front page for the comic on February 28, 2012[8]. Something Awful user Aramek would later provide voice overs for the first few chapters, leading to an eventual audiobook/dramatic reading to be published on YouTube under the account "tailsgetstrolled"[9]. One of the SA users behind this project also produced ten songs based on the first ten chapters of the comic, and music videos for the first two songs. The original tailsgetstrolled YouTube account has been abandoned, but has been succeeded by a newer one titled ultimatetailsgetstrolled[10].

On May 2nd, 2018, YouTuber Ben Saint of the Pro Crastinators Podcast uploaded an extensive lecture[13] focused on explaining the happenings of Tails Gets Trolled which has gained over ~220k+ views.

The comic has also gained a notable following on the "Video Games" and "Comics & Cartoons" boards of 4chan, with "dumps" (group readings) happening from time to time.

The Unsettled Tom meme[14], gaining popularity around March 2019, originates from the comic.