Daisy is a charatcer appearing in Tails Gets Trolled. She is one of the Mushroom Kingdom's denizens.

Daisy appears wearing a two-piece outfit with a yellow top and orange shorts. She has large blue eyes and wears daisy shaped earrings.

Daisy first appears in person on Chapter 26: Anguish, Page 11, greeting Mario as he returns from his expedition. She asks about Luigi's whereabouts and offers Mario a basket containing beans and burritos, before waving him goodbye as he continues to the castle. 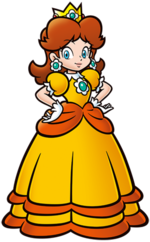 Her outfit in Tails Gets Trolled is more skimpier than her usual attire from the franchise, revealing more of her skin.