Not to be confused with Kei-so, who is also known as Goomba Looking Mother Fucker.

Goombas are a race of creatures found in the Mushroom Kingdom in the world of Tails Gets Trolled. They are seen under the employ of Bowser and are often trolled by other characters.

Goombas are small, brown mushroom shaped creatures. Their upper body contains their face, consisting of their eyes, large eye brows, and a large mouth. Their legs are connected to the head by a lighter, tan part of their body, but this part is not always present (such as in Panel 4 of Chapter 1, Page 21).

In the present, the first appearance of a Goomba occurs during Chapter 1, where one is seen being trolled. After being pushed to tears, Mario and Luigi appear and murder the two trolls present. Another Goomba is seen within Bowser's lair being trolled by The Fist in Poo Clan. Bowser mistakenly thinks that the two trolls are referring to him when they are insulting the Goomba and are killed shortly afterwards.

Goombas are not seen again until chapter 10: silver's plan and tails training accompanying Bowser Jr.. They are shown assisting the young Koopa by spying on Mario, who had recently returned after his unsuccessful battle with the Troll King. A Goomba reports to Bowser Jr. that Mario is planning to battle The Trolls once more. Bowser Jr. responds by stating that he will pass this in tell on to his father. Later on, a lone Goomba is found within the realm of Coyote's group. During his battle with Miladox, Coyote and the ghost of Garry retreat into the book to formulate a new plan. Coyote uses his strings to grab ahold of a Goomba and sends it outside to look at Miladox. The Goomba is then slashed down by Miladox and promptly absorbed into the eye. His spirit is later seen again freed from Miladox, teasing a Poppy Bros Jr. over the possibility of being turned into Miladox's penis.

Goombas appear to be quite sensitive despite their appearance, as they easily burst into tears after being trolled.

Goombas lack any notable powers aside from walking around. They appear to lack the intelligence to not walk off cliffs if one troll in Chapter 1 is to be believed. 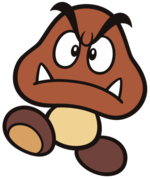 Goombas are one of the Mario franchises' most common enemy types. They are often depicted as low ranking members of Bowser's forces and/or early game threats.

The Goombas in Tails Gets Trolled have not displayed many differences from their typical appearances in the main games. They are still shown as being affiliated with Bowser's army.

Notably, the Goombas appearing in Chapter 10, Page 16 have blue eyes, whereas in the main games they are always shown with black eyes with the exception of Super Mario Odyssey, where their eyes turn blue similar to Mario's while under possession.