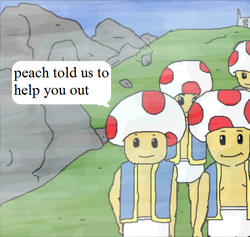 Toads in the Mushroom Kingdom, with Peach's Castle seen in the background.

The Mushroom Kingdom (also known as Toad Kingdom) is a location within the world of Tails Gets Trolled. It is home to many characters of the Super Mario series.

Before the events of Tails Gets Trolled, Bowser would often terrorize the Mushroom Kingdom. The earliest defeat of Bowser is mentioned to be at the hands of Yoshi, while Mario and Luigi were teens. After his defeat, the Mario Bros. set out to find their parents, traveling through a snowy region until they find their house. There, they meet their mother and father and learn that they have been abandoned as children. In disgust over their lack of care for them, Mario kills his parents and burns their house down, while also learning of The Trolls from his father.

Following that event, Bowser would continue to wage war with the Mushroom Kingdom and the Mario Bros. would continue to fight against him. One day, a Toad is trolled and Mario's hatred for the trolls is rekindled causing him and Luigi to set out, creating a plan to get revenge against the trolls. After playing along with the Troll Slaiyers, Mario reveals his own agendas and turns traitor against Shadow's group, deciding to fight against the trolls in his own way.

The Mushroom Kingdom provides various means of support to Mario in his own plans. Toads from the Kingdom provide Mario with support by gathering items for him to use. Russ T. and E. Gadd also begin researching stars and fusing them together in hopes of making a holy star, providing Mario with enough invincibility time to defeat Troll King with.