Yoshi is a character appearing in Tails Gets Trolled. He is one of Mario's loyal followers and assists the plumber in battle.

Yoshi is a green dinosaur with orange scales, and a red shell / "saddle" on its back. In his first appearance (as well as his appearance on chapter 10: silver's plan and tails training, Page 15), his saddle appears to be strapped to him via a brown belt.

According to Mario, long ago, Yoshi defeated Bowser around the time the Mario brothers were teenagers. Since then, it is not known what the dinosaur did in the years to come.

The next time Yoshi is seen is shortly after Mario reveals his true intentions to the Troll Slaiyers. Mario whistles, summoning Yoshi to his side. Mario then pulls out a blue shell from his satchel, and feeds it to Yoshi, causing him to grow wings. Mario then escapes using the aid of Yoshi.

Yoshi is briefly seen drinking up from a lake after escaping the Slaiyers with Mario. He not seen again until the end of Mario's failed battle with Troll King where he attempts is called to take Mario away from the battlefield. Troll King uses his muscle weakening shockwave to drop Yoshi from the sky. Yoshi attempts to fight back using his tongue but Troll King effortlessly grabs it and hurls Yoshi away. Mario then uses a Warp Whistle to summon a tornado, allowing both him and Yoshi to escape. Yoshi is next seen accompanying Mario on his return to the Mushroom Kingdom.

Though he does not appear to be able of speech, Yoshi is loyal to Mario. He is brave enough to attempt to fight Troll King when Mario is reeling from one of the Words of Death.

Yoshi is capable of consuming a blue shell in order to gain flight, similar to what he can do in Super Mario World. He also appears to be quite fast when summoned, as seen when he is called during Chapter 7: mario vs king troll. He initially appears a blur and circles the King before moving to Mario's side. Yoshi can also extend his tongue out to attack. His tongue appears quite long judging from the distance between him and Troll King when the King grabs ahold of it. 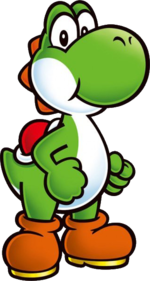 Yoshi is a companion to Mario, first appearing in Super Mario World for the SNES. Since then, he has appeared in several future games as a side character, and has even starred in his own franchise titled after himself.

Yoshi's shell/saddle on his back appears to be strapped to him using a brown belt, as opposed to it being attached to his back as in the main games. Yoshi's eyes are sometimes tinted blue, but they're completely black in TGT.