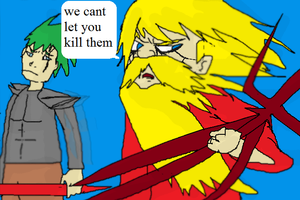 A group of Satanists.

Satanism is another religion held by characters in Tails Gets Trolled. Followers of Satanism are known as Satanists.

Like Christianity, the exact origins of the religion are unknown but the Satanists appear to have been around for a long period of time. Kelic explains that sentry's [centuries] ago, the Satanists and Christians were involved in a long war. By combining the blood of a hell hound and an angle, the branches gave rise to a subgroup known as The Neutrals who were then used for war. After the Neutrals died out, the Satanists then sought to create more Neutrals.

In the present day, Kelic is tasked with finding more Neutrals for the Satanists, but his faith begins to waver. He himself shows doubt over whether or not Satan exists and is surprised when Satan actually speaks to his group after completing the first stage of the ritual. His dedication to the Satanists is later cut after speaking with Coyote, as he experiences an epiphany, realizing the conflict between the religions is childish, and destroys the fountain so that no more Neutrals can be created.