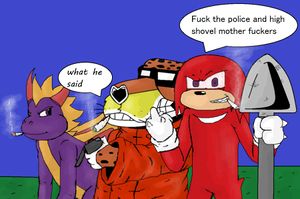 Weed (also known as gra gra) is a substance used by many characters in Tails Gets Trolled. 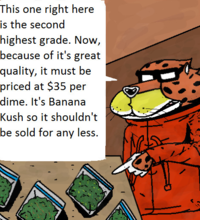 Weed is often represented as being a green, leafy substance. It is rolled up and smoked in a similar fashion to cigarettes. Weed can also be smoked from bongs and out of disco balls. Characters under the influence of weed are described as being "high". 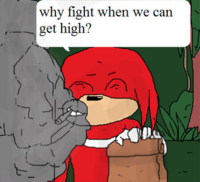 Weed has long existed within the world of Tails Gets Trolled, to the point where a dedicated community exists for it, known as the weed community (or alternatively as the weed side). Knuckles is pleased to see that Tails has become a member of this community.

Weed is both smoked for recreation by various characters and sold for profit. It is mentioned by Knuckles during chapter 14: puppet battle, Page 9 that he grows his own weed which Shadow smokes.

The first time weed is mentioned in Tails Gets Trolled is after Shadow and friends bury the Retard Double Threat during Chapter 1. Knuckles and Shadow smoke weed off-screen, but are seen by Pori who confronts them the next day. After accidentally killing Teemo, Knuckles then leaves to smoke his smart weed to help the Troll Slaiyers think of a plan. When he returns, he reveals to the group the details of his plan, which was to simply get high.

Weed is also seen being smoked by Cheeto Man when he first meets Tails. Upon seeing the fox struggle to use the Cheeto Ball, Cheeto Man begins to hotbox the room to help Tails focus. He is then able to master the skill, and moves on to see Dexter. After Ronald McDonald attacks Tails, Cheeto Man and Tails spend some time outside the Defenders' Base, smoking weed together. Tails and Knuckles eventually reunite and together with Cheeto Man, Spyro, and Doug, the group begins to smoke weed together. They are eventually joined by Knuckles' bitches, Rouge, Patty, Jessy, and Candy Kong, who smoke with them. (Amy also attends and smokes a joint after Knuckles insists she does).

Weed causes the user's eyes to become red and bloodshot. It also appears to make characters "wilder" than their usual states. Doug in particular becomes more annoying to his peers when smoking weed. This is not always the case, however, as Knuckles is seen pacifying a group of trolls in the Cocoa Jungle by smoking weed with them. Tails is also able to master the Cheeto Ball after being hotboxed (a weed technique in which an individual smokes a great amount of weed, indirectly causing those around the user to get high) by Cheeto Man.

Knuckles also claims that weed (or rather, a particular brand of weed he dubs "Smart Weed") makes him smarter. It is unknown if this is applicable to other characters.