chapter 14: puppet battle is the 14th chapter of Tails Gets Trolled. The battles between Rob and Hindo, as well as Coyote and Demaro begin while Fudd makes his escape from captivity.

Rob and Hindo engage in a Dragon Ball Z-esque power up sequence in which both go Super Saiyan. A character resembling Captain Ginyu from Dragon Ball Z proclaims the two have reached a power level above 9000 despite there being no difference in their appearances. Hindo reaches Super Saiyan 3, two levels above Rob's vanilla Super Saiyan, only for the The Narrorator to interrupt and call Dragon Ball Z stupid. It's revealed that the following screaming match was a curious day dream of Rob's, and Hindo has begun to wield a pair of metal gloves that amplify his electric powers. Rob uses his Dragonborn powers to counter Hindo's electricity, and track his placement as he shifts through the walls. He viciously attacks Hindo, ripping him out of the wall and unleashing an eruption of flames directly into Hindo's face. Hindo's electric form is too quick, and he manages to avoid the fire.

Tom and Sylvester continue clearing trolls out of the castle, including a fat, ugly, virgin troll that no one will remember or care about. An orange haired, rapping troll crushes Sylvester's Tweety puppet. Sylvester holds his emotions back while Tom shit talks him, and goads Sylvester on to let out a little sadistic joy in punishing the troll for destroying his puppet. Sylvester manages to convince Tom to kill the troll. Outside, Silver continues failing to flirt with Blaze.

Coyote decides the closed environment of the castle puts him at a disadvantage against Demaro, who reveals his Guardian to Coyote. In Demaro's rage, he's easily led to the outside, where Coyote gains the upper hand. The sky turns red, as influenced by Demaro's Guardian of the Moon. Coyote withdraws Road Runner and a book, and the Yin Yang Serpends can be seen escaping the bag. 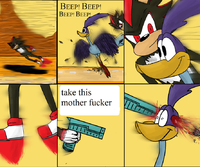 The Road Runner is slain.

Coyote reminisces on when he finally turned Road Runner into one of his puppets. Shadow and Knuckles were advised to meet up with Coyote by Bugs, who is present for the meeting. Knuckles breaks away to buy some weed from Cheeto Man, his dealer. Shadow explains the awesome fucking plan to Coyote, who is critical of it, but he can be convinced if the Troll Slaiyers can kill Road Runner for him. Shadow's gun is too slow for the Road Runner, so Shadow and Knuckles dig a hole and cover it to trap the Road Runner, but not without hitting a hot high shovel first. The Road Runner runs right over the pit, and Shadow pursues it with his gun. Knuckles uses a technique that allows him to punch the ground in one spot, and create a hole in another spot to trip it. Shadow uses this opportunity to catch up with it and kill it. Coyote helps the Troll Slaiyers build the explosive stage, and when Coyote returns to The Neutrals sans Fudd, who went after Bugs. Coyote is aware Bugs is with the Troll Slaiyers, so he ensures the Neutrals watch over Fudd to ensure he not be at risk of the explosion.

In the present, Fudd is fleeing from a group of trolls, as he's defenseless without his shotgun. He tricks a troll coroner by claiming that he's the new guy, and the coroner can leave him alone. Fudd finds Luigi's corpse and raises it to clear out the trolls chasing him. In Rob and Hindo's fight, Hindo courses electricity through Rob, instantly killing him. The Narrorator muses that this was done out of fate's cruelty, to utterly fail at the end of a goal, just as its in reach. As Hindo begins pissing on Rob's corpse, Rob awakens from another bizarre daydream. The two begin fighting, with Rob utilizing several Dragon shouts against Hindo, who once more enters the wall. Rob, however, can sense exactly where Hindo hides.