Hello Kitty is a character in Tails Gets Trolled. She is a member of The Defenders.

She is also the wife of Cheeto Man. Her struggling relationship with Cheeto Man would lead to her cheating on him with characters such as Shadow or Tails, causing drama between the two and for others around them.

Hello Kitty is a anthropomorphic cat. Hello Kitty has black, beady eyes with no pupils in a similar manner to Doug's. She has three whiskers on each cheek and a pink nose, and is also shown wearing a flower accessory.

Under her robes, she is shown to have several scars and claw marks on her body, some of which are more red potentially indicating that they are more recent.

A lot of Hello Kitty's exact backstory before joining the Defenders remains a mystery. She tells Tails that the exact reason she joined the Defenders was simply because she thought it would be nice.

She eventually would wed Cheeto Man while in the Defenders, though their relationship would be far from happy. According to Knuckles in Chapter 17: Psychological Assessment and Chapter 20: The Storm part 2, she would have constant affairs with other people, Shadow in particular, much to Cheeto Man's discontent.

Hello Kitty is first seen in the present introduced alongside other members of the Defenders in Chapter 5: tails kid napped, but does not formally meet with and train Tails until Chapter 10: silver's plan and tails training. She trains him to use a shield power that reduces damage by 20%. Tails is quickly able to master this skill and moves onward to train with Kermit. She would later visit Tails once again while he is resting to train with Spyro. She encourages him to continue on with his training while revealing some details about herself. The next day, she meets with Kermit and the two watch as Tails finishes his training with Spyro.

The next time Hello Kitty is seen is after Cheeto Man defends Tails from Ronald McDonald. She worryingly runs into the room alongside Kermit and Trix Rabbit and hugs Tails, asking if he is alright. She does not appear again until Knuckles and Cheeto Man's weed party begins, where she decides to join the festivities after Patty encourages her.

At the party, Hello Kitty takes a sharp turn from her friendly demeanor displayed before when she sees Amy and Tails reunited. She is openly hostile towards Amy and talks down towards her before Knuckles pulls Amy away. Afterwards she nags Tails about his "stupid fucking friends" before smoking weed with him. As they smoke, she asks Tails if he believes that the world could be peaceful one day but is frustrated when he does not answer seriously. Hello Kitty scolds Tails for not taking things so seriously and urges him to pay more attention before Tails gives a real answer, saying that he does believe the world will someday be peaceful.

Hello Kitty then asks whether or not Tails believes in true love before taking his hand and escorting him to a bedroom. Before they can get there, however, Amy calls out to Tails from a hot tub and asks him to join her and Knuckles. He agrees, much to Hello Kitty's annoyance. Kitty allows Tails to go and waits for him to be done chatting on a sofa nearby, stating that as a cat she does not like water. After some time passes and Amy finishes telling her story to Tails, Amy suddenly moves over to Tails and kisses him, angering Hello Kitty. She storms over to the pool and drags Amy out and begins to beat her before Knuckles stops the two and leaves with Amy.

Hello Kitty takes her clothes off, revealing her scars to Tails before they have sex.

Cheeto Man comes over to see what had happened, to which Tails reassures him that it was nothing. Hello Kitty and Cheeto Man exchange some tense words before they leave to the bedroom as originally planned. While on the way, they begin to talk and argue over Amy, but Kitty eventually apologizes for lashing out. They pass by Cheeto Man in the hot tub who asks where they are going. When he hears that they are going to the bedroom, things become tense as Cheeto Man delivers some vague threats to Kitty, before they head off.

Now in the bedroom, Hello Kitty begins asking more questions to Tails starting with his thoughts on change and then asking about his past. She tells him that she thinks of him as the light of the group, or the fire in the dark before asking what his happiest moment was. He answers that his happiest memory would be sharing chili dogs with his friends before Kitty asks one final question - whether or not Tails likes her. Before he can give a proper answer, she moves in to kiss Tails and the two have sex on Cheeto Man's bed.

The next day, after Tails and Knuckles flee from the Defender's base, Cheeto Man confronts Hello Kitty over what had happened the night before. She talks back to Cheeto Man, telling to assume whatever he wants and confirming that she did indeed sleep with Shadow before. Furious, Cheeto Man begins to choke her out before letting go when Kitty screams that she is pregnant. Cheeto Man leaves to get her a pregnancy stick, threatening to kill her if it isn't As he's gone, Kitty prays that she truly is pregnant, revealing that it was a bluff to get Cheeto Man away.

Hello Kitty is very kind towards Tails (and Kermit), supporting him and staying near him as he trains. She also appears to have strong feelings for him, though how much of his is genuine is unknown as Knuckles mentions that Hello Kitty "fucks anything that moves". Her attitude towards others differs vastly, however. She is very hostile towards Amy during the weed party and does not hide her disdain for her and Knuckles when speaking to Tails alone.

Her relationship with Cheeto Man is also devoid of love, and the two openly hate one another, as Kitty herself laments the fact that she "couldn't see" the truth of Cheeto Man before being involved with him as she leaves the hot tub area with Tails.

Hello Kitty's main ability is forming a barrier that is stated to reduce incoming damage by 20%. Aside from her shield, she has not displayed any other powers of note. 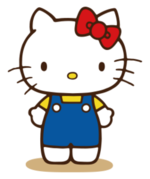 Hello Kitty is the mascot for a series of toys, TV shows, music, coffee, and much more. She is typically depicted as a young student.

The Hello Kitty appearing in Tails Gets Trolled appears to be much older than the child she is typically portrayed as, being taller and much more vulgar. She also does not have any magical powers of note in her usual depictions but does possess the power to create a barrier here.

Appearance wise, Hello Kitty differs a lot from her usual appearances. She has a much older figure in Tails Gets Trolled, having breasts and a taller body compared to her childlike appearance typically shown. Her nose is pink while it is usually colored yellow in most media as well.