Cheeto Man is a character appearing in Tails Gets Trolled. He is a powerful member of The Defenders who is initially a mentor to Tails and teaches him to use Cheeto Energy. 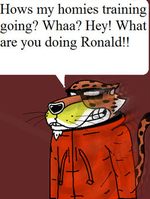 Cheeto Man with a beard.

Cheeto Man is a bright orange/yellow striped cheetah wearing a reddish-orange hoodie/jacket. He wear large glasses, obscuring his eyes, which are only seen during certain angles in the comic. In his earlier appearance, he wears orange trousers with his hoodie, but later is seen wearing orange shorts instead. His nose/snout is initially large in size but shrinks as the story goes on. Notably, on some panels in Chapter 15 (such as Page 18's) he appears with a beard.

Though not seen, he claims that his penis is the size of Dexter's whole body.

According to Cheeto Man, before the Neutrals, he was captured by The Trolls and kept captive within a cage. During his imprisonment, he was trolled endlessly until he was rescued by other members of The Defenders. However, according to Knuckles in Chapter 20, in reality, Cheeto Man is the true leader of the Defenders and controls the others through intimidation. Some time after meeting the Defenders, Cheeto Man captures many relatives of the current members (ranging from Miss Piggy, Arthur's sister, etc.) in order to keep them under his control. He also forms a large STD-free prostitution business (as Knuckles puts it). Said business leads to him gaining a vast amount of drugs, money, and resources, allowing him to force others to sell drugs in order to make him money. Trix Rabbit is also said to form a child trafficking ring where he sells children for sex.

In the Defenders, Pacman is established as the group leader while Cheeto Man appears to be a follower. Cheeto Man is then first seen when Tails is kidnapped and introduced by Pori to the others. He is not seen again until Tails finishes training with Spyro and moves to train with him.

When they meet, Cheeto Man introduces himself to Tails and explains his backstory to him. He then demonstrates his Cheeto Ball technique to Tails. As he struggles to learn it himself, Cheeto Man hotboxes the room to help Tails concentrate and he is successful in doing so.

Cheeto Man is not seen again until the end of Tails' training with Ronald. Ronald attempts to choke Tails out in a fit of rage but is saved by Cheeto Man running in the room and attacking Ronald. Afterwards, he and Spyro are assigned as Tails' bodyguards to watch over him. Some time later, Tails walks into Cheeto Man and Knuckles in the middle of a drug deal. The two suggest that the group, later joined by Doug, get together to smoke weed to celebrate their reunion.

As they smoke, Knuckles and Spyro make jokes about Cheeto Man's wife, Hello Kitty, sleeping around with various other characters (such as Shadow), much to his annoyance. After a while, Doug passes out and Cheeto Man asks Knuckles to call over STD-free bitches to join them. The group moves over to Cheeto Man's room where they continue to smoke until the girls Knuckles called over arrive. Spyro and Tails go off to do other activtities at the party, while Cheeto Man chats with Patty about Doug's sexuality. Eventually, Tonya arrives from her shift to inform Cheeto man of his earnings, but is scolded and threatened to be thrown into "the well" for misbehaving.

After their talk, the two return to the party. Cheeto Man comes over to the hot tub after Amy and Hello Kitty get into a fight. After calming them down, he invites Candy Kong and Tonya to relax with him in the tub. Tails and Hello Kitty pass by, and things become tense when Candy Kong insinuates that the two are going to have sex.

The next day, after the party ends, Cheeto Man is seen meeting with Knuckles to have Amy join his ring. After some talk, Knuckles reveals that the women he called over were not STD-free and that both himself and Cheeto Man now have the clap, and that his STD-free business has now been ruined. Enraged, Cheeto Man moves to attack and chokes Knuckles, but is stopped when Tails enters the room. Knuckles and Tails leave, while Cheeto Man stays to confront his wife, Hello Kitty. He learns that she had slept with Tails the night before, and nearly chokes her out before she claims she is pregnant.

In Tails Gets Gay: The Dickfenders

In Tails Gets Gay: The Dickfenders, Gay Cheeto Man is seen smoking gay weed with several other characters. He compliments Gay Tails for treating Gay Spyro's dog with kindness. Later, he is seen in awe of the fox's "glamour vibes" after Gay Skat assists with a makeover.

Cheeto Man presents himself as an easy going, weed loving cheetah. He is shown to care deeply for Tails, and is willing to share details regarding his past with him. He can also be seen as "father-like" to Tails, giving him advice while smoking with him and protecting him from Ronald's attempted murder.

Beyond his initial appearance however, Cheeto Man is revealed to be ruthless and cruel. He is stated by Knuckles to have kidnapped many family members of the Defenders in order to force them to work under him. He is also willing to hurt Tonya for nearly breaking his "cool" image in front of Tails. Cheeto Man also has a loveless marriage with Hello Kitty. He appears to be somewhat aware of Hello Kitty's repeated sexual encounters with the likes of others, including Shadow, causing him to have an intense dislike for the black hedgehog and for anyone who sleeps with his wife.

He also appears to have a dislike for white tigers, calling them "tigga posers" and even having the skin of one used as a rug in his room.

Cheeto Man possesses many skills, ranging from his "Cheeto Ball" to having incredible speed.

It is said by Spyro that his powers outmatch the Troll King himself, and that Cheeto Man had previously defeated the King in the past. Ignoring this, he nearly kills Knuckles by teleporting and choking him to death. After Knuckles slipped and ran away, he instantly kills all the prostitutes from last night's weed party and drops them in a ditch. This all happened in like 5 minutes while Tails and Knuckles talk.

In the Tails Gets Gay universe, he claims that he is able to see the essence of love in the air. He is also capable of feeling "glamour vibes", and appears to be taken aback by Gay Tails' vibes after he receives a makeover. 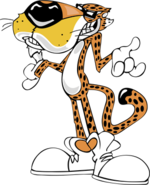 Cheeto Man is based on Chester Cheetah, the mascot for the snacks known as Cheetos. He is referred to as "Cheeto Man" in TGT rather than Chester because, according to Lazerbot, "Cheetoman is what me and my Bros called him as a kid when we would see the cheeto commercials".[2]

Chester is often portrayed as a "hip-kitty" who tries to eat other people's Cheetos and is generally involved in some mischief with others. As with many characters in Tails Gets Trolled, he is more violent and aggressive compared to his usual self. His physical appearance also differs, as he wears a red hoodie and pants with regular glasses, rather than being naked and wearing sunglasses as his real life counterpart usually does. Chester Cheetah is also typically seen with a small white beard growing from his chin, while Cheeto Man is typically seen without one.

His snout is quite large early on in the story, similar to his original incarnation, but gradually shrinks until it is much smaller than it is usually portrayed as in his other appearances.