Spyro is a member of The Defenders, based on the main character of the Spyro the Dragon franchise. He refers to himself as "fucking awesome" near constantly, and teaches Tails how to fly more efficiently.

Spyro is a dragon with purple and yellow skin. He has red horns and a yellow mane. Spyro does not appear to wear any clothes in contrast to the other Defenders, who wear their robes.

Before joining the Defenders, not much is known about Spyro's life beforehand. Hello Kitty mentions that he had chosen to join the Defenders after his entire race was trolled, seeking revenge.

He mentions outright that his son had been kidnapped by Cheeto Man, forcing Spyro to work under him at an unknown point of time.

He has a history of smoking weed with Knuckles in the past, though prior to the fateful party with Tails, Knuckles mentions that the last time they smoked together, things did not go well.

Spyro is first seen introduced alongside the other Defenders in Chapter 5, but he does not personally train Tails until Chapter 10: silver's plan and tails training. Following his unsuccessful training with Kermit, Spyro meets with Tails and begins to train him in how to fly like the awesome badass that he is. Their training takes a while, and Spyro decides to continue training Tails the next day. On that day, Spyro makes Tails fly through a series of rings in the air at a fast speed. Tails is successful and the two celebrate afterwards. 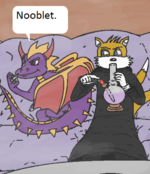 Spyro and Tails smoking weed together.

After Ronald McDonald attacks Tails, Spyro (as well as Cheeto Man) is assigned to act as Tails bodyguard by Pacman. The two meet with Knuckles buying drugs from Cheeto Man. Spyro watches as Knuckles and Tails reunite and joins in when Knuckles offers to smoke weed together. During the party, Spryo butts heads with Doug multiple times, teasing him over his supposed sexual encounter with Vivian and making fun of his singing. He also offers Knuckles a chance to join the Defenders, to which he responds that he might. As the party goes on, Doug gets more rowdy. He picks up Spyro's dog and begins biting his ear, then throws him on the floor when bitten in retaliation, angering Spyro. The final straw is broken when Doug eventually pukes on the floor, passing out, causing Spyro's group to move over to Cheeto Man's room to continue in peace.

Now in Cheeto Man's area, Knuckles calls over some girls to party with them. After they arrive, Spyro and Knuckles play pool together, and are joined by Rouge and Jessy. Spyro and Jessy win against Knuckles and Rouge, and the two begin to flirt with one another. Shortly afterwards, Spyro and Jessy are seen making out and later having sex on the pool table, with Rouge joining them. Their session becomes quite intense as the party goes on, with Spyro shoving a pool stick between Jessy's legs later on.

Their fun is cut short when Spyro overhears the sound of Knuckles and Cheeto Man fighting. He leaves in a panic once "shit goes down". The next time Spyro is seen is when Tails has fled from the Defender's base. A huge contrast from earlier, Spyro is deeply saddened to see Tails, and explains that he must bring him back in or else his son (and himself) will be put in danger. However, Tails convinces Spyro to let him ago by promising that he will save his son. Spyro leaves, empty-handed, but warns Tails that the next time they meet they will be enemies.

Spyro is incredibly cocky, making several references to his badass nature and awesome skills. He is loud and does not hesitate to brag about his prowess.

Despite his cocky nature, he does have a genuine friendship with Tails. After training him, Spyro refers to him as fucking awesome and mentions that he does not often call others as such.

When he confronts Tails after the fox sees Cheeto Man's body dump, he also refers to Tails as his only true friend.

Though Spyro has not been seen in a fight so far, he is incredibly skilled at flying through the air. This is due to his technique of flapping his wings like a bird, as he explains to Tails, which helps him fly quickly. 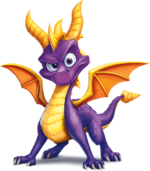 Spyro is the protagonist of his own eponymous video game series.

Spyro in Tails Gets Trolled is much more vulgar and arrogant than he is in his own games, constantly making references to how fucking awesome he is. He is also an adult with a son, rather than the child he is portrayed as in the games.