Knuckles is a character in Tails Gets Trolled. He is a friend to Tails and is first seen talking to Shadow. He initially tags along with the Troll Slaiyers, "helping" Shadow think of ways to fight back against the trolls. Later, he meets with Tails after he has joined The Defenders and smokes weed with him and others in a grand party.

Knuckles is a red anthropomorphic echidna. His quills hang down as opposed to how the hedgehog's sticks up. They are initially drawn to be long, reaching down to his shoulders, but later on, they are shown to be very short. Knuckles has a white U-shaped crest along his chest, and his hands/gloves are pointed with spikes.

Knuckles is first seen talking to Shadow after Sonic and Tails (unsuccessfully) return from attempting to speak to the trolls who had harassed Tails earlier. He later accompanies Tails and Shadow when Shadow offers to show Tails how to properly deal with trolls.

After the two trolls are murdered, Knuckles helps bury the two of them and high shovels with Shadow before leaving. The next time he is seen, he is sleeping with Rouge and Donkey Kong. After some time he wakes up confused and questions Rogue (later revealed to have contracted the clap from her). Tails then appears to alert him that Sonic is in trouble after being confronted by a pack of trolls. The two leave to help Sonic, and arrive just in time to see Sonic slaughter the trolls.

In the fight against the trolls, Shadow begins to create the Awesome Fucking Plan, which involves staging a fake Justen Beaver concert to lure trolls into and destroy them. A flashback in Chapter 14: puppet battle reveals that Shadow and Knuckles assist Coyote in killing the Road Runner in order to receive funding to build a fake stadium with. Knuckles stays with Shadow's group to build the stadium for a while, but leaves to see Tails when he is texted by Sonic about Tails being injured.

Some time later, Knuckles appears briefly to tell an injured Tails that he fucked up big time (in reference to Tails unsuccessfully attacking a troll and injuring himself in the process during Chapter 2: trolls attack) and that Sonic is now out for blood.

Knuckles is not seen again until the end of the Chapter 6: silver's mission. Following the death of Sonic, Knuckles appears and asks Shadow if Sonic's girlfriend, Amy, is now single. Shadow, disgusted at Knuckles immediately attempting to make a move on Amy after Sonic's death, explains that he is thinking of different plans to fight back against the trolls with his group, the Troll Slaiyers. Knuckles suggests firing Teemo out of a cannon straight into the troll base to ambush them, but his plan fails and Teemo is "killed" after being launched into a mountain. Knuckles then leaves to smoke his smart weed in order to assist with thinking of more plans.

Knuckles returns in Chapter 10: silver's plan and tails training after smoking his smart weed. He also brings Amy with him, who is depressed over Sonic's death. Knuckles then explains what he was doing in the meantime.

After Googling the location of a nearby troll base, discovered a chatroom where various trolls discussed their duties. Acting as a newbie, Knuckles asked where one of these bases could be found and made his way over there, while smoking weed. When he was confronted by a group of trolls, Knuckles makes peace with them, saying "why fight when we can get high?", and proceeds to have a good time with the trolls. Annoyed, Shadow asks what he accomplished, and Knuckles explains that his plan was to simply get high and he did. An angry Shadow reprimands him for wasting his time with his story.

After some time with the group, Shadow and Knuckles begin to argue. Shadow punches Knuckles and rants at him about not taking his troll-slaiying plans seriously. Later, in a fit of rage, Shadow then proceeds to obliterate a town of random people. Disgusted, Knuckles leaves Shadow's group.

Knuckles is seen midway through Chapter 17: Psychological Assessment, purchasing a bag of weed from Cheeto Man in the Defenders' base. It is here that he is reunited with Tails. Knuckles, Tails, Cheeto Man, Spyro, and Doug then all proceed to get high.

While high, Knuckles mentions Hello Kitty's many sexual escapades with Shadow and other Defenders, a fact that annoys Cheeto Man. After some banter, Knuckles calls over some "STD-free bitches" (Amy included) to Cheeto Man's party. Knuckles, Amy, and Tails then chat in a hot tub, where Amy's traumatic past is revealed to the group. Tensions begin to rise as Amy flirts with Tails, provoking Hello Kitty into fighting her.

Knuckles and Amy then leave the hot tub and enter a room alone together after the fight. He reveals that he has strong feelings for Amy, and was jealous over his friend Sonic's relationship with her. After a heated conversation, he and Amy then have sex one last time before executing their plan.

The following day, Knuckles and Amy meet with Cheeto Man to pass her into his prostitution ring. Knuckles reveals his true feelings of hatred towards Cheeto Man and that his bitches being STD-free were a lie, with both animals now having the clap. Cheeto Man and Knuckles fight before they are interrupted by Tails.

Knuckles leads Tails away from the Defenders' base. After some talking, he reveals the true purpose of the Defenders and how Cheeto Man is the true leader of the group, with all others serving under him because their loved ones have been taken hostage. He also warns Tails that the Cheeto Man is likely going to kill him because he had slept with Hello Kitty, who is his wife. However, Tails refuses to believe so. Tearfully, Knuckles leads Tails to a dumping grounds (featuring Amy, and the rest of the women brought over by Knuckles) where Cheeto Man sends all his STD-ridden prostitutes to die. He advises Tails to seek out Shadow for safety, because he has been evading Cheeto Man for years, before leaving.

Despite his previous determination, Knuckles is then seen in the jungle wandering around lost and high on weed. After hallucinating the names of cool people, Knuckles remembers his original objective of finding Shadow and discovers a troll camp with several brutalized bodies lying about. As he moves in, Knuckles accidentally triggers one of Teemo's trap mushrooms and is covered in a poisonous gas, knocking him out.

Knuckles is initially shown to be laid back, bantering with his friends and making silly remarks. During his time with the Troll Slaiyers, his care-free personality (leading to the first death of Teemo via the "cannon plan") often clashed with Shadow's serious and more focused approach. He is also a fan of smoking weed, even claiming that it can make him smarter.

As the story goes on, it is revealed that despite his silly exterior, he also cares deeply for his friends and is willing to do whatever it takes for their benefit, demonstrated by his willingness to pass the clap on to Amy to spare her from a life of prostitution. He cares for Tails very much in particular, admitting to Amy that he was concerned as to why Tails is with the Defenders, and comforting him when he reveals the truth to the group. His friendship with Tails also gave him the power to fight back against Cheeto Man once he heard his voice. It is also shown that despite their differences, Knuckles does respect Shadow's abilities when he suggests that Tails should seek him out again to hide from Cheeto Man. Knuckles is also shown to be envious of Sonic's relationship with Amy, claiming that the blue hedgehog never understood how valuable Amy was and wishing that he could have been the one to be with Amy.

Knuckles mainly fights using his fists. He is shown to have the ability to create cracks in the ground in different location from where he punches it as shown during the flashback when he and Shadow assist Coyote in hunting the Road Runner. He is also capable of gliding as seen in Chapter 1 when he rushes to watch Shadow kill trolls.

During his very brief clash with Cheeto Man, Knuckles is shown slamming his fists together to create a shockwave, which throws Cheeto Man off-balance.

Do you feel how much i want you dead? I picture a blood bath.. Ripping each other to pieces. Oh i feel it, but I didn't imagine it would get to this point. YOU WON'T GET AWAY WITH THIS!!
—Knuckles, to Cheeto Man, Chapter 20, Page 10
Oh yeah by the way, i lied. Me and the other chicks i brought over weren't STD-Free. We all have the clap and now so do you.
—Knuckles revealing his plan to Cheeto Man, Chapter 20: The Storm part 2, Page 11 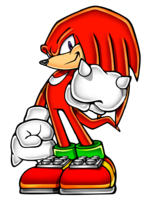 Knuckles the Echidna first debuted in Sonic the Hedgehog 3 as an enemy tricked into working for Eggman. As time went on, the Echidna would find himself becoming one of Sonic's most trusted allies. Knuckles is often shown being dedicated to his job of guarding the Master Emerald, and can be stoic or hard-headed at times, sometimes appearing to be a loner, but in more recent appearances, he can be quite silly. He is notably the last Echidna to exist within most depictions of the Sonic universe.

In Tails Gets Trolled, there is no indication that the Master Emerald may exist within the world, and Knuckles duty of guarding it is not mentioned nor is his background as the only surviving Echidna. His carefree attitude in Tails Gets Trolled more closely resembles how he appears in Sonic Boom where he is considerably more air-headed than his past counterparts. Knuckles in Tails Gets Trolled is also romantically involved with Amy, whereas in the games he does not interact with her that much. (He is shown to have a more flirtatious relationship with Rouge instead, which does seem to be acknowledged by the two having sex alongside Donkey Kong however). In the Archie comics he is also shown to have quite a large family, but they do not appear to exist within Tails Gets Trolled.