Patty is a minor character appearing in Tails Gets Trolled. She is a childhood friend of Doug and Skeeter, and was once Doug's love interest. She is invited to join Cheeto Man's party at the Defenders' Base by Knuckles.

Patty, like Doug, has eyes that are completely black in color, with no pupils. She wears a yellow tank top exposing her midriff alongside a yellow skirt.

Approximately 10 years ago, Patty used to be part of a TV show named Doug within the universe of Tails Gets Trolled, alongside her friends Doug and Skeeter. She and Doug are said to have had romantic feelings for one another, but Doug never acted on his feelings. Frustrated over him not taking the first shot, Patty asks Doug directly about their feelings but Doug gets incredibly defensive, and (according to Patty's story) begins to cry, denying his homosexuality (even though Patty never insisted to that to begin with). After this incident, Patty appears to have split from Doug and Skeeter as the two secret lovers join The Defenders following the death of Porkchop.

Patty briefly meets with Knuckles some time before being invited to the party and has sex with him, unknowingly becoming a carrier of the clap in the process. Patty then appears as one of the bitches brought to Cheeto Man's party with Knuckles. Upon arrival, she is asked by Knuckles if she was dating Doug but then she explains her story to him. She learns from Knuckles that Doug is nearby and leaves to see him. Outside the party area, Patty finds a trail of puke leading to Doug's room. When she enters, she notices some movement in bed and turns the light on and sees Doug currently having sex with Skeeter. She is shocked at learning the supposed truth behind why Doug never acted on his feelings for her and takes a picture of the two before leaving.

On her way out, she runs into Amy, who is looking for Knuckles to join the party with. Patty guides Amy to where Knuckles and the rest are and bumps into Hello Kitty. She manages to convince Kitty to join the party as well and eventually returns to the party. She joins Cheeto Man at his table and tells him about Doug's relationship with Skeeter, sending the picture to his email account. From there, she spends most of her time at the party on her laptop, chatting with Cheeto Man and the others. Unfortunately, as the party concludes, Cheeto Man learns that she is not as free from STDs as Knuckles had claimed and kills her shortly afterwards, dumping her body in a pipe alongside the other girls who attended the party.

Patty is friendly to those around her except for Doug (though she was still willing to see him after 10 years), who she was willing to photograph and send a picture to Cheeto Man later. She smiles often and insists on Hello Kitty joining the party to help her relax after seeing that she is stressed. She also appears to be quite sociable, as she claims to have many girlfriends on Facebook and Twitter.

Patty is not shown to have any special abilities or powers. 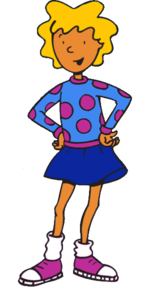 Patti Mayonnaise is one of the main characters in the show Doug. She is Doug's love interest and is generally regarded as being a nice person in-universe, though she can be slightly competitive at times.

Appearance-wise, Patti in Tails Gets Trolled seems to have a completely original design compared to her cartoon appearances. She appears considerably older and has larger eyes compared to the show.