Doug is a character appearing in Tails Gets Trolled. He is one of the lower-ranking members of The Defenders and tends to be an annoyance to the rest.

Unlike other characters in Tails Gets Trolled, Doug's eyes are pitch black, appearing as dots. He is mostly bald with the exceptions of small points of hair growing from the top of his head. He is mostly seen wearing his black robe in his appearances. Doug also claims to have a penis the size of a boat.

Before joining the Defenders, Doug was evidently popular on TV, as Tails recognizes Doug when they first meet. At some point before joining up with the Defenders, his dog would end up being "gang banged to death" by The Trolls, prompting Doug to join. He and Skeeter are implied to have been involved in some form of a homosexual relationship in the past, as Doug mentions receiving a handjob from Skeeter before, and Skeeter stating to him later that they agreed to be "just friends" 10 years prior. Patty also mentions an incident in which she speaks to Doug about her feelings for him which ended with Doug crying and denying the idea that he might be gay.

Doug is first seen alongside Skeeter questioning Tails immediately after kidnapping him. He is completely convinced that Tails is a member of the trolls and threatens him before Pori appears and explains to him what is really going on, scolding him for his paranoia in the process. Doug (and Skeeter) are both skipped over when Tails begins to train as they are stated to be weaker than him. 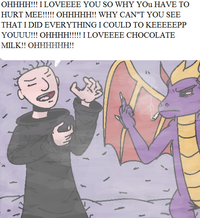 Doug bursts out into song.

The next time Doug is seen is when Knuckles arrives and smokes weed with Tails, Cheeto Man, and Spyro. Knuckles is initially opposed to letting him smoke with them due to a past incident but he is allowed in when Cheeto Man allows him in.

Things do not last long before Doug begins to get rowdy. He begins to claim that he had an intense five hours of sex with Vivian but no one believes him. Doug also becomes defensive when Spyro insists that he may have had sex with Trix Rabbit or Skeeter instead. Shortly afterwards, Doug bursts out into song much to the annoyance of everybody in the room. Knuckles suggests leaving Doug and moving over, but then Doug picks up Spyro's dog and begins to chomp on its ear. When it bites back, Doug slams it onto the ground and gets into a heated argument with Spyro where he denies being in a sexual relationship with Skeeter. Now at his limit, Doug begins to puke before bursting into tears, claiming that he and Skeeter never had sex and that he had only given him a handjob in the past before passing out. The group then leaves him unconscious in Spyro's room.

Doug can be a pest to the other Defenders. Pori talks down about Doug and thinks of him as paranoid, while Knuckles talks about not wanting him to smoke weed due to a past incident. Doug also appears to regret his homosexual relationship with Skeeter (or being revealed as gay), as he vehemently denies the possibility of accidentally having sex with Trix Rabbit or Skeeter during the party.

Notably, Doug appears to be very afraid of Cheeto Man and the true nature of the Defenders. During his time spent with Knuckles smoking weed, he immediately attempts to derail the focus of the conversation away from Hello Kitty and Cheeto Man's relationship to anything else whenever it comes up (either by talking about Vivian or singing), to avoid angering Cheeto Man.

Doug has not displayed any abilities of note nor has anyone mentioned him having any powers. He is implied to be incredibly unskilled considering that Pacman mentions that an untrained and inexperienced Tails is still stronger than Doug. 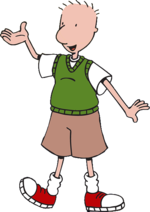 Douglas "Doug" Funnie is the star of his own television show, Doug. In it, he records his various adventures growing up and moving through elementary school in a journal to tell the viewers. He is best friends with Skeeter Valentine and Patti Mayonnaise, harboring feelings for the latter.