Espio is a anthropomorphic chameleon. He has a yellow horn on his forehead, between his eyes. On some panels he is drawn with black scales on his back, while on others he is lacking them, such as on chapter 4: Deceit, Page 8.

During his fantasy in Tails Gets Trolled Polished he appears to be extremely muscular. He is shown wearing blue pants before pulling them down and revealing his large exaggerated penis. In reality, he is shown to have a micropenis which is not visible until it is shown in detail.

Prior to the main events of the story, Espio first met Sonic during the blue hedgehog's many battles against Eggman. Espio first appears to back up Sonic during his battle with the Troll King, bringing Emerl, Vector, and Cream with him. He moves in to attack Troll King, but is quickly stopped by the King's muscle-weakening shockwave. Cream and Vector move in to join the battle, but they are outmatched by Alex, Garry, and Luigi. Espio watches as his friends get beaten while he helplessly lies on the ground, being kicked by Luigi and Alex. Eventually, after incinerating Cream, Luigi splatters Espio using his hammer, killing him.

Espio is given extra screen time in Tails Gets Trolled Polished. He is first seen when Vector returns with food for the group and throws him a wrench he brought, dislocating Espio's finger when thrown. After snapping it back into place, Espio and the group talk about Amy's relationship with Sonic, with Espio theorizing that Amy might be cheating on him with Knuckles. After Vector leaves to ask Shadow for details about Amy and Sonic's relationship, Espio chats with Cream about her feelings for Vector and their thoughts on Amy. He awkwardly attempts to flirt with Cream before she leaves, leaving Espio alone. 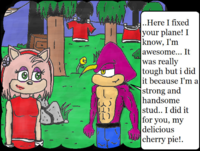 Espio as he imagines himself (and Amy) in his fantasy.

Later that night, Espio finishes the repairs on Tails' airplane. He begins to rant to himself over the fact that he does favors for the group but is never thanked for it. In his frustration, he imagines a scenario where an exaggerated version of Amy approaches him and thanks him for his efforts. Amy then asks Espio to fertilize her, and removes her shirt revealing her giant anime breasts in front of Tails, who is permitted to watch. Espio unravels his long, purple penis and unleashes a large Cumehameha on Amy's breasts. Back in reality, Espio looks around and attempts to masturbate to this dream but is interrupted by Cream. He despairs as Cream awkwardly walks away before remembering that he needs to give back a gun to Shadow after repairing it.

Some time later, Espio is seen talking to Vector, telling him to ignore anything Cream might be saying about him. Sonic passes by after having angry sex with Amy, and Espio passes the key to the plane and Shadow's gun on to Sonic. He in offended when Sonic thanks him but does not refer to him by name, instead opting to call him "Pink Guy". Espio and Vector then leave. Vector, smelling blood, fakes having a stomach ache to leave Espio behind. Espio falls for it and leaves when Vector asks for some privacy while he shits. Along the way back, he believes that he might have shit himself as well and checks his own butthole to confirm, and is relieved that it is only sweat

Espio does not have any personality of note in Tails Gets Trolled due to his limited screen time and quick death. In Polished, he is shown to be quite desperate for love, as shown by his feelings for both Amy and Cream. He is also be rather disgusting at times, constantly attempting to get Cream to have sex with him or "subtly" imply that they should be together. It is implied in Polished that the other Sonic characters avoid hanging out with him for his personality.

Espio has not displayed any notable physical abilities in the series. He is, however, shown to be a skilled mechanic in Polished, being able to fix Emerl and Shadow's gun. He is also seen doing repairs on Tails' Tornado.

His fantasy version is capable of unloading the Cumehameha, which is a large, powerful stream of semen fired from his penis.

..Oh... So just to clarify, I'm the type of brother you don't want to fuck, right? Like some hick or Japanese shit?
—Espio, Tails Gets Trolled Polished, Page 12

...I WISH YOU WOULD!!
—Epsio responding to Cream when she says "Fuck you!", Tails Gets Trolled Polished, Page 26 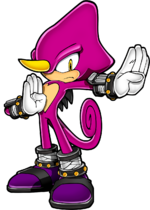 Espio the Chameleon is a character appearing in the Sonic the Hedgehog franchise. He is often seen together with him cohorts Vector the Crocodile and Charmy Bee, known collectively as the Chaotix Detective Agency.

In the main series, Espio is shown to possess ninja-like abilities such as invisibility and extreme speed. He does not show any of these skills in Tails Gets Trolled.

His appearance is slightly different as well. His armbands are more simple in design, lacking the spikes and other decorations. His shoes are also black instead of purple. As mentioned, he is also lacking the spikes along his back on certain panels.