Cream is a character from Sonic The Hedgehog, who briefly appears alongside Espio, Vector and Emerl to help Sonic fight the Troll King. She is swiftly killed by Alex and Luigi, being burned to death by the latter's fire attacks.

During Amy's flashback in Chapter 19, Cream is shown alongside Shadow, Knuckles, Espio, and Vector and is mentioned to have become friends with Sonic during his battle against Eggman's robot armies.

Cream is not seen in the present until she appears in Chapter 4: Deceit to assist Sonic in his battle against the Troll King. She is particularly ineffective during the fight, immediately being kicked away by Alex, breaking her arm in the process. She later stumbles around the battlefield in tears before Luigi burns her to death using his green flames.

Cream appears much earlier in the timeline and is given more screentime alongside Vector and Espio. In Polished, she is revealed to be friends with Vector and Espio and shown to have romantic interest in the former.

Cream is shown to be a very concerning person who cares for her friends. Despite her inability to fight, she still tagged along with Espio, Vector and Emerl to help Sonic during the blue hedgehog's battle.

Notably, she seems distant from Amy during Polished as she does not want to speak of her when Vector and Espio begin to talk about her relationship with Knuckles. She also calls Amy a slut while talking to Vector, showing that she may have some disdain for Amy.

Cream displays no combative abilities whatsoever, having her arm easily broken by Alex with a single kick. She is then killed by Luigi before she can do anything else.

..I can't compare to Amy... Her vagina has a gravitational pull for penises.. She's a slut! There's no competing with that..
—Tails Gets Trolled Polished, Page 11 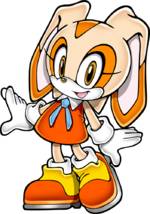 Cream the Rabbit is a character from the Sonic the Hedgehog franchise, originating from the game Sonic Advance 2. She is usually accompanied by her Chao companion, Cheese, and is good friends with Amy Rose.

In Tails Gets Trolled, Cream appears on her own without Cheese. In Polished she is implied to have a broken relationship with Amy, as evidence by her referring to Amy as a slut and the fact that they do not appear to talk to each other. Her verbal tic of referring to Sonic as "Mr. Sonic", Tails as "Mr. Tails", etc. is gone.