Vector is a green "alligator" and a friend of Sonic. He initially appears as backup for Sonic during the blue hedgehog's clash with the Troll King but is quickly subdued. After losing an eye, he joins Shadow and becomes a Troll Slaiyer.

Vector is a large, green anthropomorphic alligator/crocodile. He wears white gloves and black armbands/legbands, which are initially adorned with a gold pattern but are drawn as being ordinary black bands in his later appearances. In his initial appearance he appears with headphones and a gold chain but quickly loses during the battle with Troll King.

Afterwards, due to one of his eyes being torn out, he wears an eyepatch to cover the hole. 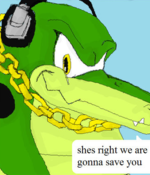 Vector appears to help Sonic against the Troll King.

Vector does not appear until Sonic's battle with the Troll King. He shows up alongside Espio, Cream, and Emerl and battles against Troll King's own reinforcements in the form of Luigi, Alex, and Garry. He and Espio are quickly knocked down and get kicked several times by Garry and Alex. After Luigi incinerates Cream, Alex suggests tearing one of the alligator's eyes out to Garry. Vector attempts to fight back by biting Garry's leg but he is unsuccessful and loses his eye in the process. From then he watches in horror as his friends are brutally killed. The Troll King then spares Vector, telling him to go to Shadow and warn him that he is next on the King's hit-list.

Bloodied and battered, Vector makes his way to Shadow's location and tells him of Sonic and their friends demise. After vomiting blood all over Shadow (and watching Mario's betrayal), he is then taken in by the group and given an eye-patch to cover up his face.

Following this event Vector becomes a member of the Slaiyers and joins them in their group meetings. He shows some concern over Shadow's fixation on Mario, believing that the group should prioritize defeating the trolls over all else. He is ignored but continues to follow the group regardless commenting on the different events that occur in the group, such as noting Shadow's anger issues or praising the genius of Shadow's new plan. Later, after Teemo re-spawns and meets up with the group, Shadow gives Vector the title of "the butt pirate", much to Vector's annoyance.

Vector is given more screen-time in Polished alongside his friends, Espio, Cream and Emerl. He initially appears bringing food from a restaurant known as the Branch Cranch to Espio and Cream. The group discusses the possibility of Amy cheating on her boyfriend Sonic with Knuckles, which Vector doubts. Not wanting to believe that Amy would cheat on Sonic, Vector decides to find Shadow in order to learn more. During his search he witnesses Amy and Sonic having sex and leaves the pair be.

Vector eventually meets up with Knuckles and sees the group attempting to bury Butter Tits and the Dick Taker who were killed earlier. He gets into an argument with Shadow over bringing Tails along to witness murder, stating that Tails is still a child and he should not be exposed to such violence. Vector also uses this oppurtunity to ask about Amy and Sonic's relationship and learns of the actual reason why she is cheating on him with Knuckles. He is disappointed to learn that she is indeed cheating as the rumors say and is shocked when Shadow explains that she is doing it out of her desire to be finally left alone and given the chance to kill herself. Shadow also tells Vector the reason why Amy wants to kill herself so badly, causing Vector to leave depressed.

Vector is the "sane man" of the Slaiyers, often commenting on the ridiculousness of the events around him (such as Teemo's respawn and asking Hulk to use his brain before asking dumb questions) and tries to steer the group towards their intended purpose of troll slaiying (as opposed to hunting Mario) but to no avail. He does care a lot for his friends as shown by his willingness to come to Sonic's aid and following that, his desire to stick with Shadow after delivering the Troll King's message.

In Polished he is shown to be deeply concerned with his friends well beings, though he does appear to be quite innocent as well. He has difficulty in believing that Amy would cheat on Sonic (though a part of this may stem from his desire to have her as his own girlfriend, as Shadow seems to insinuate), and is outraged when he sees that Shadow and Knuckles let Tails witness murder.

Vector is able to use his large mouth to chomp away at his foes, though this proves to be ineffective on Garry. Other than that he does not demonstrate any notable powers or abilities. However, he is quite resilient, being able to drag himself over to the Troll Slaiyer's hideout despite his massive injuries.

In Polished he is shown to have the ability to sniff out blood which is an ability unique to himself according to Shadow in the script (page 34).

the boss killed sonic with out even trying and sonic went all out and even went super saiyan and everything. the boss troll didn't even get hurt... and he let me live so i could let you know your next
—Vector describing Chapter 4's events to Shadow, chapter 4: Deceit, Page 19 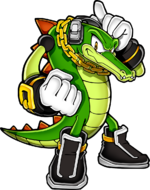 Vector the Crocodile originally debuted in Knuckles' Chaotix as one of the game's playable characters and as the leader of the Chaotix Detective Agency, consisting of himself, Espio the Chameleon, and Charmy the Bee.

In Tails Gets Trolled there is no indication that the Chaotix Detective Agency exists within the setting, and he and Espio do not appear to be working together as part of a group. Charmy is also absent.

In terms of physical appearance, Vector does not wear an eyepatch in the Sonic series due to his eye not being ripped out as it was in Tails Gets Trolled. As mentioned, he also loses his gold chain and headphones after Chapter 4. His shoes are also white as opposed to black as seen while posing for the Troll Slaiyers reunion.