Emerl is a human like robot, primarily colored yellow with some parts being orange. Parts of his arms, legs, and waist are colored grey instead. He has blue eyes and a large orange horn sticking out from his forehead.

Though the exact details regarding Emerl's creation are unknown, parts of him are seen in Eggman's lab alongside E123-Omega as Amy is taken to a bedroom.

In the present day, Emerl appears alongside Espio, Vector, and Cream to battle against the Troll King and his backup. Espio fights the Troll King one on one and learns copies his muscle slowing shockwave attack. The move is not as effective on the Troll King due to his age, but provides the robot with an advantage. After Cream is burned to death by Luigi, Emerl copies Luigi's fire beam and uses it to scorch Garry's face to a crisp. The tides quickly turn against the robot as Luigi finishes off Espio and Alex joins the King and Luigi in teaming up on him. Emerl makes a valiant effort, combining both of his learned moves, but is ultimately destroyed by being split in half by Troll King.

Emerl's death would wind up proving to be helpful for the Troll King and the Mario Bros., however. Luigi salvages Emerl's chest plate to provide himself protection against Troll King's shockwave, and ambushes the King. Though he is unsuccessful, Luigi manages to send Mario a blueprint for Emerl's chest plate to give him an advantage in his upcoming fight. The Troll King also takes Emerl's arm to replace his missing one that was splattered by Luigi, and then passes the remains on to Heimerdinger in hopes of him furthering his progress on the troll bots.

Emerl makes a small appearance in Tails Gets Trolled Polished in the background character. He is seen under repair by Espio, and can only repeat the phrase "I'm a robot" over and over.

Emerl does not have much of a personality to speak off besides the fact that he cares enough about Sonic to defend him during his time of need.

Emerl is surprisingly fast, capable of getting the jump on Troll King during their encounter and matching his physical power. He is equipped with jet boots that allow him to fly over Troll King and evade his attacks as well. Due to his nature as a robot, he is also immune to Troll King's muscle weakening attack.

Emerl is also capable of learning and copying moves from his opponents. After watching the Troll King and Luigi use their special skills, he is able to use them for himself. Interestingly, the Troll King is also able to make use of Emerl's learned fire attack from Luigi when replacing his arm with Emerl's. 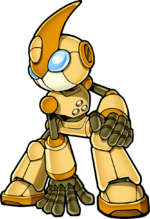 Emerl is a robot first appearing in Sonic Battle, a fighting game from the Sonic the Hedgehog series. He is initially weak but grows to be quite powerful as he learns the skills of those around him.

Emerl keeps many of his traits from the main Sonic games intact in the world of Tails Gets Trolled, surprisingly. In the main series, he can absorb the power of the Chaos Emeralds to use, but does not attempt to try this with Sonic's emerald during their fight with the Troll King.