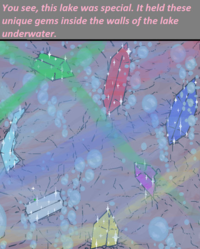 The Chaos Emeralds (also referred to as the Chaos Emarolds) are special jewels found within the world of Tails Gets Trolled.

The Chaos Emeralds were first found in the lake where Amy resides in. During the night, they give glisten and provide a beautiful view of the lake. One day, when Eggman chases Sonic to this lake, he notices the emeralds in the lake and takes one to study later. Later, he discovers the potential of the Chaos Emeralds and uses the one to create a replacement “super computer battery” to power his robot army.

After failing to save Amy, Sonic grabs every Emerald in the lake to prevent Eggman from getting them and hides them in various spots in the world. After finally tracking down Eggman, Sonic strikes a deal with Eggman. In exchange for Amy’s freedom, he would reveal the locations of the Emeralds to Eggman (despite not needing more than one for his plans). Eggman accepts and Sonic retrieves the emeralds, but keep a few for himself. He discovers the emeralds ability to slow time in the process.

Years later, Eggman appears to have realized that Sonic did not deliver all the emeralds to him as the two make another deal where Eggman asks for all of the emeralds in exchange for locating Troll King’s base for Sonic. They agree and Sonic hands his emerald over to show Eggman that he is serious. Eggman searches and prints out the location of Troll King’s current area before he is murdered by Sonic as retribution for putting him and his friends through so much. Sonic then uses his emerald to become Super Sonic.

After Sonic’s death, his emerald is taken from the battlefield by Pori and passed on to Dexter, who in turn gives it to Tails. It is then revealed in a conversation between Dexter and Vivian to be a fake. Later on, Troll Face is seen with Sonic's real emerald, utilizing it to attack Coyote at Troll Fortress.

The Chaos Emeralds are a mystical set of gems appearing throughout the Sonic series. They are seven of them total, and collecting all seven grants an individual an extreme amount of power.

Compared to Tails Gets Trolled, there are several Chaos Emeralds, far surpassing the seven there are in the main series. In order to enter a super form, Sonic only requires one emerald as opposed to all seven.