Sonic is a main character in Tails Gets Trolled. He is a close friend to Tails. A believer in peace, he, unlike his friend Shadow attempts to help Tails with his trolling related problems by talking them down without the need for any villains, until future events push him toward a darker path.

Sonic is shown as a blue, human like hedgehog. He is typically shown with blue quills, beige arms, and green eyes. He is also shown to wear white gloves and red shoes. While transformed into Super Sonic, his fur becomes yellow and his quills stand up more.

Sonic also occasionally appears with blue arms, such as the one where he turns into Evil Sonic during Chapter 3. He is also shown with blue hands under his gloves during Chapter 4 when he is killed by Troll King.

It is revealed through a flashback in Chapter 24: Coyote's Wrath that Sonic had been implanted with a mysterious core and a tracker by Eggman at one point during his life. Using his technology, Eggman patched Sonic up and deactivated the core inside his body.

Before the events of Tails Gets Trolled, Sonic had managed to escape from captivity and fled to the Spring Water Lake. In his own words, Eggman had considered Sonic to be his most prized project, giving him the power of super speed. One day, Sonic manages to escape from Eggman's labs, stealing a super computer battery with him that Eggman uses to power his robots. He eventually found his way into the land where Amy lived peacefully. The two becomes fast friends and lovers after Amy helped heal his leg injury from falling off a cliff, almost making love before falling asleep together.

The next day Sonic is awoken by a noise and realizes that Eggman has tracked him to this area. He attempts to get Amy to flee the area with him, but Amy refuses. The two argue for a while, but before they can continue, Eggman arrives in his Egg Capsule. Rather than capture Sonic, he decides to kidnap Amy instead as retribution for wasting his time. Despite his injury, Sonic attempts to rescue her as she is taken away but is unsuccessful, and falls into a lake. Knowing that Eggman would return for the Emeralds, he grabs all of them from the lake and hides them around the world.

Sonic then makes a deal with Eggman to gather the Chaos Emeralds in exchange for Amy's freedom, banking on Eggman's greed causing him to accept the deal. In the process, he discovers the Emeralds power to slow down time, keeping some of them for himself for use in the battle against Eggman's forces. He eventually rescues Amy from captivity after giving some of the Emeralds to Eggman. He takes her to his hideout and helps her recover from her trauma caused from Eggman's daily abuse. Two years later, he also rescues a young Tails from an old lab of Eggman's, and raises him together with Amy. From then on, Sonic and his friends begin the fight against Eggman's robots.

Once Amy recovers and opens up to Sonic, she explains to him all the things Eggman did to her in captivity. This breaks Sonic mentally, and he becomes focused on finding and killing Eggman as revenge. According to Amy's narration of the events, he has had the chance to kill Eggman before but could not bring himself to kill another person. The anger builds up inside Sonic, giving rise to his "dark form", destroying the cave they were living in.

As time passes, Sonic and Amy's relationship becomes more strained as they begin to argue much like a married couple. Despite the hardships, the two stay together.

A Battle You Can't Win

Sonic and Amy are still a couple by the time Tails is trolled and the story is set in motion. He offers to show Tails how to defeat a troll using kindness but is angered when Butter Tits refers to Sonic's girlfriend as a slut. Sonic angrily leaves to have sex with his girlfriend to calm down. Unfortunately, this leads to the couple breaking up as Amy feels as if she is being used by Sonic as nothing more than sexual relief.

One day after, Sonic talks with Tails and discovers that Shadow had killed the trolls from the day before. Sonic confronts Shadow later and berates him for resorting to violence. Shadow explains that his way was the only way to fight back and mentions that if it were up to him, then Eggman would already be dead. Before they can continue, more trolls appear and Sonic once again attempts to use peace to settle things. Just as before, Sonic loses his temper when the trolls call his (ex)girlfriend a slut and unleashes his dark side to kill them.

After he calms down Sonic refuses to be involved in the inevitable battle with the trolls and Shadow, and leaves. The following day however, he finds Tails badly injured from attempting to fight Alex. This pushes Sonic over the edge. The next day, Sonic has one final conversation with Amy where he acknowledges that peace is an impossibility with the trolls, before leaving and promising her that he will be back. As Knuckles explains to Tails later, Sonic goes to meet up with Eggman once more to get revenge on the trolls. 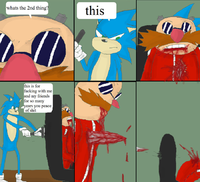 As they did years ago, Sonic makes a deal with Eggman to gather the Chaos Emeralds in exchange for the location of the troll's hideout. Once Eggman prints out a map of their location, Sonic finally kills Eggman using a large knife and becomes "evil sonic" before leaving. Upon reaching the base, Sonic is surprised to learn that the leader of the trolls is in fact, an actual living troll.

After the Troll King explains his backstory, Sonic uses the power of a Chaos Emerald to become Super (Evil) Sonic and the battle begins.

Sonic is quickly outmatched by the Troll King's strength and various powers, and reverts back to normal. Before he is finished off, Sonic's friends (Espio, Emerl, Cream, and Vector) appear to protect him from the Troll King. Unfortunately for them, reinforcements for the Troll King arrive, and eventually, all of Sonic's friends (except for Vector, who is brutally injured) are killed. After watching his friends die, Sonic gathers the last of his energy to become Dark Sonic, but he is quickly grabbed, then decapitated by the Troll King before anything can happen, thus ending the hedgehog's long life.

Much later, as Coyote attacks Troll Fortress, Sonic's pristine body (kept by Troll Face, who had used him as a sex toy) is recovered and added to Coyote's collection.

Sonic cares very deeply for his friends, particularly Tails. He goes to great lengths in order to make sure they are safe, such as personally taking care of Amy to help her recover from her trauma, or calming Tails when he is upset about being trolled. His care is deep enough that he is extremely hurt when he "fails" his friends. He blames himself for what had happened to Amy after she opens up to him about her backstory and later seen "broken" after blaming himself for not protecting Tails when he is attacked by Alex.

Sonic is a strong believer in using peace to defeat his foes, as seen when he refuses to kill Shadow or the trolls, instead opting to talk them down. It is also mentioned by Shadow (and Amy) that Sonic has been unable to kill Eggman for good because of his nature. Despite this, he does have a limit. When Tails is beaten by Alex, he begins to crack and becomes more violent in nature, finally mustering up the willpower to murder Eggman and take a more offensive approach to dealing with trolls.

Sonic is able to run very quickly to escape his foes or catch up with others. He is also capable of basic hand to hand combat as seen during his fights with the trolls.

Sonic also has different forms he can enter. When angry he can turn into a dark blue version of himself that is much stronger physically, as shown when he cleaved a troll horizontally in two by kicking through him. He also can become "evil sonic", which keeps his current color but darkens his eyes, leaving only red pupils. Sonic is also capable of becoming Super Sonic with the use of Chaos Emeralds, enhancing his strength and speed for a limited amount of time.

I'm so mad. im gonna have sex with my girl friend so i wont be so mad
—Sonic after being trolled, Chapter 1, Page 5
I hate this, why does it have to be this way? All this bloodshed.. If i'm not fighting Eggmans robots i'm fighting someone else. Where does it end? I don't want to go through this chaos all of my life, i want to end this hate.
—Sonic after his battle with Shadow, Chapter 19, Page 14 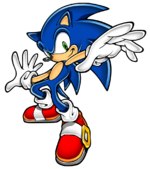 Unlike his Tails Gets Trolled counterpart, Sonic is not in a relationship with Amy nor does he possess the power to change into a darkened form of himself when angered, though he does have a similar ability in the TV series Sonic X. He also does not typically use weapons such as a knife to battle.

Unlike the canonical Sonic, Sonic doesn't have a goofy attitude instead he is very prone to anger and, while initially trying to be peaceful with the trolls, decides against his better judgment that it is best to kill them. Sonic also kills Eggman in TGT which is not something he would ever do in reality.

Additionally, in the Sonic games he is 15 years old, while in TGT he is around the age of 30. His fur is also depicted as a lighter shade of blue than in most of his "official" appearances, and he has a different design on his shoes.