Troll Fortress is where most of Silver's group conduct their siege of the castle. According to Silver, using his device planted during Chapter 6: silver's mission, there exists 102 rooms in the castle. The fortress is of great use to Troll King, providing him with many resources in his quest to make everyone know the name of the Trolls.

Several of the rooms are located underground. When Coyote encounters Demaro, he opens up a hole in the ceiling, bringing him and Demaro to the fields surrounding the fortress.

During Troll King's seige of Alferd, he leads an army of trolls to take over the city. During his flashback told to Sonic on chapter 3: the truth, Page 19, a castle is spotted in the city of Alferd. It is not explicitly said if this castle was taken over and repurposed as Troll Fortress or if Troll King simply built a new castle. 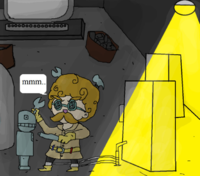 Heimerdinger working in the lab.

In the modern day, Troll Fortress is first seen during Chapter 6: silver's mission, when Silver and his group spies on the castle from a distance. Silver infiltrates the castle and comes across an off limits laboratory where he discovers Heimerdinger and learns of Troll King's plan to build an army of robotic trolls and weapons. He narrowly escapes from the fortress after his cover is blown with the aid of Fudd.

Afterwards, Hindo captures Fudd and he is brought to Troll Fortress. Troll King tortures Fudd and attempts to convince him to join The Trolls, to which he reluctantly obliges after Troll King threatens to sever his penis. After eating Eggman's brains and gaining his intelligence, Fudd is put to work with Heimerdinger to help build Troll King's troll bots. Troll King himself then leaves on a mission to search for the place where the Words of Death are learned in order to teach them to the Man in the Ice.

Elsewhere, Demaro learns of Fudd's presence in the castle and demands to see him so that he can eat his brain and learn about the location of his arch-nemesis, Coyote. He is stopped by his brother Garry and the two battle in a large underground chamber with Demaro emerging victorious. He eventually discovers the room where Fudd is held but is stopped by Hindo. Just then, explosives are set off outside, distracting Hindo for a moment allowing Fudd to escape while Demaro decides to wait in the room upon realizing that Coyote will eventually arrive at his location.

Fudd makes his way to a morgue during his escape and finds a coroner performing "biobsys". He discovers Luigi's corpse, which is not mangled due to Troll Face keeping it in good condition to use as a sex toy. He takes control of Luigi, killing the coroner and other backup trolls, making his escape from Troll Fortress. Rob and Hindo also meet up and begin to battle, with their duel moving them to the roof of Troll Fortress. Within the castle itself, Tom and Sylvester wander around the halls and are ambushed by Troll Face, who manages to kill Sylvester after ambushing them from the shadows. 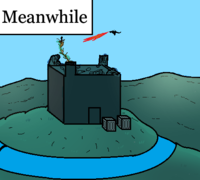 Troll Fortress as it appears in Chapter 24.

The extreme villains occurring at Troll Fortress is noticed by those outside, such as the Neighborhood Watch and other minor trolls. Some of these trolls, such as Jeff or Jayce, attempt to defend the fortress from the carnage of Demaro and Coyote's battle. The Neighborhood Watch attempts to enter the castle to help protect it, but they are stopped by four identical looking trolls stating that Troll Face has instated a new law. The law states that those who wish to enter the castle must have a pass obtained by giving Troll Face a rimjob. Disgusted, the group gives up. Much later, General Plastro locates Troll King and informs him of the assault on Troll Fortress, angering the King.

Silver states that there are 102 rooms in Troll Fortress. The notable rooms are listed below.