Chapter 19: THE Storm part 1 is the 19th chapter of Tails Gets Trolled. Amy continues her backstory, revealing a shocking truth in the process.

After their romantic moment, Sonic and Amy almost have sex but they refrain due to Amy wanting to wait until marriage. Sonic respects her decision and together they sleep under the stars. That morning, they are awoken by an odd sound in the distance. Sonic panics as he realizes that it must be Eggman who has chased him after escaping from captivity.

Sonic tries to convince Amy to leave with him, but Amy is hesitant, stating that the lake area is her home. Sonic tries his damnedest to convince her by explaining his backstory, and how he was used as an experiment and kept frozen in a chamber when unneeded. Despite this, Amy refuses to leave her home. The two are soon spotted by Eggman. Eggman laughs as he finally locates Sonic and prepares to capture him but is stopped when he notices the gleam of the Chaos Emeralds in the lake.

Eggman extracts one Emerald to analyze later as Amy and Sonic watch. Eggman, noticing that Sonic is attempting to protect her, has a change of plans and decides to kidnap Amy instead seeing as he can locate Sonic anywhere and any time he pleases. Eggman's capsule then extends a claw and grabs Amy, causing Sonic to give chase despite his injury. He leaps into the air and grabs onto Amy's arm, looking at her one last time before he loses grip and falls into the lake.

The bedroom where Amy is imprisoned.

In the present, Tails questions why Amy is explaining this to him, and she states that he "needs" to know before continuing. Back in Amy's flashback, she is taken to one of Eggman's laboratories and placed inside a large robot. She is then taken to a pink bedroom and thrown onto the floor as Eggman walks in. He explains that Sonic had stolen from him a precious super computer battery that he used to power his robots. He gloats, stating that this was a useless act seeing as he can simply replace him and use the newly discovered Emeralds to power his robots. He attempts to dash Amy's hopes of being rescued before revealing her true purpose for being captured.

Stating that since Sonic took something of his and that it's only right if he returns the favor, Eggman pushes Amy onto the bed and begins feeling her up, and licking at her neck. Amy attempts to fight back but gives up as she realizes that he has no hopes of escape even if she did stop Eggman from advancing on her. Eggman then climbs on top of her and begins raping her as she cries in both physical and mental pain. She thinks of the night where she and Sonic kissed and regrets not having sex with him at that moment and failing to realize how blessed she was to have known as person like Sonic.

Tails and Knuckles are utterly horrified at hearing this news and stare in shock. Knuckles, furious, swears to kill Eggman (unaware of the fact that Sonic had already killed him) as Tails simply looks away in horror at what he just heard.

Amy describes her time in captivity as being "years", with Eggman coming to give a load of his once a week. Amy eventually becomes numb to being raped and does not react as Eggman has his way with her. On one occasion, Amy recalls imagining Sonic in Eggman's place causing her to have her first orgasm, much to Eggman's twisted pleasure. A brief scene of Fudd is seen as he escapes from Hindo, who is in similar horror as he begins to recall this portion of Eggman's memories and knowledge due to eating his brain earlier.

After having an orgasm with Eggman, Amy, disgusted, attempts to commit suicide. She laments the fact that even if she were to be rescued, she could never live the life she wanted to. Amy then creates a rope from the bed sheets and attempts to hang herself, but Eggman is alerted of this through a camera. He then runs into the room and rescues Amy from her suicide attempt. Amy, in despair, screams at Eggman, begging for him to allow her to die. Eggman states that he could not simply watch as his beloved wife attempts to kill herself and laughs as she angrily yells back.

Eggman then claims to have recaptured Sonic and murdered him as well as saying that he had already destroyed her home. Amy denies this and Eggman laughs as he calls her a dreamer. Since that day, Eggman chains Amy to the bed with a tube going through her mouth to feed her. Her legs are left spread open for easy access as she is continually raped each day, hoping to die.

After enduring years of rape and hardships, one day, Sonic appears in the room and frees Amy from the bed. Eggman watches as he takes over out of the lab and back to the lake where they first met. As he lays her down, he begs for her to speak and tell him that she's okay. Sonic then takes Amy to his hideout and cares for her as she recovers, looking after her and feeding her untl she can gather the will to speak. At first she is only able to repeat Eggman's "dreamer" line but over time, she begins to return to a more "normal" life.

One day, Sonic rescues a young Tails from Eggman's captivity and brings him home, raising him alongside Amy. Amy then explains the story of how Sonic came to rescue her. Moments after Amy was kidnapped, Sonic had taken all the emeralds in the lake and hid them to prevent Eggman from finding more (though unknowing of the fact that he did not need more than one). Using the single Chaos Emerald taken from the lake, Eggman is able to create another super computer battery and gives up his search for Sonic. Sonic, however, dedicated to finding Amy, makes a deal with Eggman to give the Chaos Emeralds to him in exchange for Amy's freedom, knowing that Eggman is greedy and would not refuse such an offer. He agrees, leading to Sonic eventually saving Amy from captivity.

After saving her, Sonic and Amy would continue the battle against Eggman's forces and meet many other friends along the way, such as Shadow and Knuckles. Amy explains in particular the story of Shadow and how Sonic befriended him. After sparing his life during a battle and lending him a Chaos Emerald, the Emerald would soon save Shadow's life and the two would become friends. 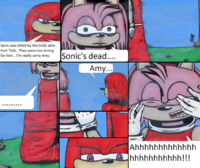 Amy breaks into tears as she learns of Sonic's death.

After a long time, Amy decides to finally tell Sonic what happened during her captivity. The news breaks Sonic and gives rise to his dark form, fueled by anger and hate. He then becomes deadset on killing Eggman, but however, is unable to do so each time because he does not have the heart to kill anyone. After this moment, Amy and Sonic would often fight over the smallest things though they would make up afterwards. One fateful day, after being trolled, Sonic returns, angry and haves sex with Amy to relieve himself. They have sex for the first time but Amy is not pleased due to her past. She very angrily yells at Sonic for using her as sex relief (in a similar fashion to Eggman) and the two break up.

The next day, Sonic approaches Amy and tells her to watch Tails until Knuckles arrives. Sonic, angry over not being able to protect Tails when he is hurt by Alex, begins to finally believe that peace is but a distant dream for him and his friends. He leaves to contact Eggman again and hunt down The Trolls in order to get revenge, finally giving in to the need for villains. Some time later, Knuckles arrives after an eventful day. He explains to Amy that Tails had been kidnapped before revealing that Sonic was killed. In anguish, Amy falls to her knees and cries and Knuckles comforts her.

A Break From The Storm

In the present, Amy tears up as she finishes her story to Tails. Knowing that Hello Kitty must be getting inpatient, Knuckles urges Amy to "do it", causing her to kiss Tails as a ghostly outline of Ronald watches. Hello Kitty is shocked and runs over to the pool. Tonya notices her from the table and alerts Cheeto Man but he remains calm for now as Hello Kitty storms over. She grabs Amy out of the pool and begins beating her while Knuckles and Tails restrict her. Amy gives off a menacing smile, licking the blood off her nose before laughing maniacally.

Knuckles, knowing that Cheeto Man is watching, grabs Amy and separates from them before Cheeto Man comes over to see what is happening. They pass by Cheeto Man as he goes to the hot tub with the other girls (Candy Kong and Tonya) to relax.