Bugs is a character appearing in Tails Gets Trolled. He is Daffy's gay lover and a member of the original Troll Slaiyers, as well as a main character in Tails Gets Gay: Bugs & Daffys Story..

Bugs is an anthropomorphic rabbit with gray fur and large grey ears. He has three whiskers extending from each side of his nose and large buckteeth.

As a reanimated corpse, Bugs has many wounds on his body, with the bullet hole left by Shadow still present in his forehead. Despite having a load of bullets shot into his head, his head appears mostly intact except for his brain being exposed on the back.

Sometime before joining the Troll Slaiyers, Bugs was a constant victim of trolling. One day, he seeks out Daffy's advice on how to deal with trolls and is advised to fight back and outdo their "dickyness with more dickyness". Bugs and Daddy become close during this time and eventually become gay lovers. In fact, Coyote mentions in a flashback that he and Daffy would often spend a suspicious amount of time together in the bathroom when they are out partying.

After Tails is trolled, Shadow calls over Bugs and others to form the Troll Slaiyers. Bugs is given the nickname of "the gay" and the group then takes shelter inside his rabbit hole to form a plan. The group creates the Awesome Fucking Plan (staging a fake Justen Bever concert to lure trolls and blowing up the arena while they are inside) and begin to set things in motion. When the day of the plan comes after the stadium is finished, however, things do not go as planned when Alex reveals that the trolls have taken Daffy hostage. Shadow attempts to kill Daffy, but is stopped when Bugs reveals his hidden love for the duck. Fudd also appears in search of Bugs.

Shortly after Luigi reveals himself as the mole for the Troll Slaiyers, Bugs and the others watch on the side as he and Mario duel each other. Luigi defeats Mario, but before he is able to kill Mario, Shadow steps in and shoots Daffy to end the hostage situation. Enraged, Bugs screams and destroys the remote that would detonate the stadium. Shadow then kills Bugs in a fit of rage.

After his death, Bugs' (and Daffy's) corpse would be taken by Fudd, now traveling with Silver and Rob, who had defected from the Slaiyers. The group seeks shelter in Underbite Troll's house, but are ambushed by Jacko the Troll and other troll minions. Fudd reveals his powers of necromancy, and uses it to revive Bugs and Daffy to use as tools.

Bugs is next seen after Fudd is kidnapped and forced to work for the trolls. He is revealed to be very knowledgeable in designing artificial intelligence, but before they can discuss robotics any further, the group is ambushed by Demaro. Bugs and Daffy are used in an attempt to fight off Demaro, but they are unsuccessful and both wind up trapped in a cage created by Demaro's powers.

In the past, Bugs is shown to be sensitive when it comes to being trolled as he is in tears when he begs Daffy for advice on how to deal with trolls. He begins to care a great deal for Daffy as he advises him on how to deal with trolls, to the point where, in his own words, "[he] actually became gay with Daffy". His love for Daffy is shown to be very potent, as he is in pure agony when Shadow kills Daffy, going as far to destroy the remote used to detonate the stadium in his despair. While he is with the Troll Slaiyers, he is shown as being somewhat snarky, remarking that Shadow enjoys playing games as he taunts the trolls at the fake Justen Bever concert.

He appears to be secretive when it comes to his actual homosexual relationship with Daffy. Their relationship is not an open fact to their friends as evidenced by Coyote not being aware of what Bugs and Daffy do while they spend long amounts of time in the bathroom with each other. Bugs is also hesitant to admit what Daffy is to him when Daffy is revealed to be a hostage, at first stating that he is "sort of [his] friend".

Not much is known about Bugs' physical abilities in Tails Gets Trolled. Under Fudd's necromancy powers, he is not often seen battling unless the situation absolutely calls for it.

However, according to Bugs himself, he has developed a talent for stopping trolling through dressing himself up as a girl and kissing the trolls. 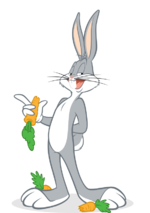 Bugs Bunny is well known for his appearances in the show Looney Tunes where he is portrayed as a relaxed, smart individual with a penchant for cracking jokes and causing mischief at times. He is often seen with Daffy Duck as his friend, and is also a frequent target of Elmer Fudd's hunts.

In the cartoons, Bugs is often portrayed as a close friend to Daffy, whereas in Tails Gets Trolled the two are seen as lovers.