The Road Runner is a character appearing in Tails Gets Trolled. He is the archnemesis of Coyote and is killed after he enlists the help of The Troll Slaiyers to hunt him down. Afterwards, he is used as a powerful corpse by Coyote in battle.

The Road Runner is a cartoon roadrunner with orange feet and blue/purple feathers. He has a long blue tail and a large purple set of feathers extending from the top of his head. The Road Runner is very skinny, with its legs and neck being nearly stick-sized in width.

After being killed by Shadow, the Road Runner appears with a bullet hole on the sides of its head representing the bullet used to kill it.

The Road Runner used to reside in a canyon-like area where it would evade many of Coyote's attempts to kill it. Coyote spent an indeterminate amount of time hunting the Road Runner down, unsuccessfully. One day he is approached by Shadow and Knuckles who want his help building a fake Justen Bever stadium as part of their Awesome Fucking Plan. Coyote explains that he will help them in exchange for the death of the Road Runner.

The Road Runner then zooms past the group and evades a bullet, surprising Shadow. The Slaiyers then begin to build a hole and cover it to try and trap the Road Runner, but the bird simply runs over the hole without falling using its' extreme speed. Frustrated, Shadow gives chase but is out sped. The Road Runner is finally defeated when Knuckles punches the ground, creating a crack a distance away that stalls the Road Runner long enough for Shadow to kill by shooting him through the head. Coyote then gets his corpse and saves it for use as a Neutral puppet.

Road Runner is finally revealed in the present by Coyote when he first begins his battle against Demaro. After Coyote explains how the Road Runner was slain, he immediately demonstrates his blinding speed. It easily cuts through Demaro's vines by running through them at high velocities and provides Coyote with a means of fast transportation. Demaro eventually hides himself within a barrier of vines to give himself a moment to think.

After emerging, Demaro traps the Yin Yang Serpends and Road Runner within a sphere, but the two slip out effortlessly. Demaro, after answering Coyote's question about the source of his hatred, finally moves in to attack. Coyote attaches himself to the Road Runner and speeds around the battlefield before letting Road Runner loose. The sly bird runs up to Demaro's face and drops a profanity on him before going back to running circles, taunting Demaro. The Road Runner eventually goes fast enough to create a sand tornado, lifting Demaro and his Guardian up in the air. The Road Runner begins slashing at Demaro from the tornado, cutting him on the back and forcing him to put up a shield.

Demaro's shield is broken (again) by one of Coyote's tricks. Coyote then uses his strings to pull Demaro out of the tornado and attaches him to Road Runner, dragging his body along the floor all over the field. He eventually traps the Road Runner using his vines and leaves him stuck there for quite a while.

Demaro eventually is powered up by Miladox and manages to harm Coyote. Using his Neutral strings, Coyote frees the Road Runner by cutting the vines apart and quickly returns to Coyote's side. They wait as Demaoro loses his powers and together, they ambush Demaro, sending him flying around the battlefield. After Coyote successfully provokes Demaro enough, he is pulled into Miladox's realm, leaving the Road Runner outside.

During the attack on Troll Fortress, the Road Runner was blown apart by the shotgun of a powered up Troll Face. (add more detail about what he did between miladox and troll face)

The Road Runner appears to be quite mischievous. Before it is killed, it is seen taunting Shadow by sticking its' tongue out at him. He also toys with Demaro during their battle, running aimless circles around him at times, though it's not known how much of it is due to Coyote controlling the Road Runner. 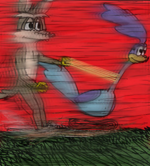 Coyote using the Road Runner to move around.

His speed winds up being an incredible asset to Coyote during his fight with Demaro. The Road Runner is capable of slashing through vines simply by running through them at a high speed. It can also create a tornado by running in a circle fast enough, and even has the power to fly in its winds. Coyote is capable of attaching himself via strings to the Road Runner and use it as a means of moving around the battlefield quickly as well. 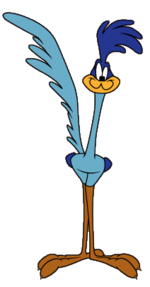 The Road Runner is the nemesis of Wile E. Coyote. He is constantly evading Coyote's attempts to capture and eat him, and their antics form the basis for their show starring the both of them.

In the shows, he is only capable of saying "beep-beep" or "meep-meep" to taunt Wile with, but in Tails Gets Trolled he is also shown calling Demaro a "fucker" while toying with him. (However, this may also be Coyote speaking through the corpse of Road Runner as it is mentioned by Fudd that corpses do not typically have the ability to speak of their own volition.)