Tom is a Neutral who aids Silver, Blaze, and Rob on their quest to retrieve Fudd from The Trolls' headquarters.

Tom is a human-like gray cat who walks standing on his two legs unlike a typical cat. He has a large round patch of fur that is lighter than the rest on his stomach. He has thick black eyebrows and yellow sclera with a bit of green surrounding his eyes. Like the other Neutrals, his hands are marked with the brand of the group. 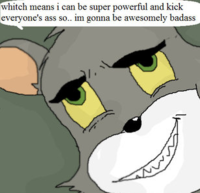 Tom aiming to become awesomely badass after discovering his powers.

In a lengthy flashback, Tom's origins are shown as being good drinking buddies with Sylvester, Coyote, and Fudd. They all talk about the various animals they try to hunt down, which they apparently have been doing for quite some time. Tom is first seen during the flashback with Fudd visiting Sylvester and Coyote, where the group plans to have a night out drinking to celebrate Sylvester finally killing Tweety. After convincing Porky to be their driver, Tom and his friends arrive at the bar. Tom sarcastically compliments Sylvester on his incredible achievement of killing a caged bird, but after some drinks, he apologizes for his rudeness. He and Sylvester then leave to smoke heavenly catnip outside and get incredibly high.

In their stupor, Tom and friends wander into Kelic's ritual and together, they attain the power of the Neutrals. The next morning, Tom wakes up unsettled within his own home and devises a devilish plan to murder Jarry after seeing him. Tom poisons a cup of milk and talks aloud to himself, stating that the milk is amazing. Jarry moves over to drink the milk in an attempt to annoy Tom and subsequently dies from the poison. Tom then notices the mark on his hand and comes to the conclusion that he has Satanist powers before leaving to find out what can be done with them.

Tom then meets up with Fudd and Sylvester to discuss what had happened. After Porky is dumped by Petunia, he attempts to comfort Porky but gets into a disagreement with Sylvester who is more of a realist. Porky leaves in tears afterwards. Tom, wanting to try and fix his friend's relationship, visits Petunia to try and explain the actual situation to her. Tom is taken aback when Petunia agrees to forgive Porky but only after he comes inside to have revenge sex with her. He sadly agrees and enters her home.

Tom then leaves and rejoins the group, where they experiment with their powers. After realizing that Porky may be in danger due to the Christians, Coyote gets the group and urges them to flee with Porky. After the Christians kill Porky's wife and family, Tom is enraged when he sees that Coyote is not attempting to help Porky. Coyote explains that they must maintain their emotions or risk losing years of their life. Tom decides to follow whatever choice Fudd makes, and the group leaves Porky as he commits suicide. That night, Tom's life is shortened for being too emotional.

To be Awesomely Badass

Tom makes his first appearance in Chapter 8: the neutral's, where he explains, alongside Coyote and Sylvester, how they became Neutrals. He is eventually enlisted by Silver to help fight The Trolls. He, Coyote, and Sylvester wait outside Troll King's castle to bait the guards. Tom and Sylvester briefly get into an argument about pornography before the trolls arrive. Silver traps them using a cage and the group rushes into the castle to rescue Fudd, who had been captured.

During the attack, he demonstrates that he has collected the corpses of many characters beyond just Jarry to use in battle, most of them dogs, such as Spike who usually antagonized him in the original Tom and Jerry cartoons. He also has animated Granny, the owner of Sylvester, for little reason other than to annoy him. 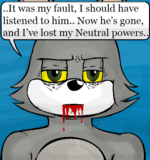 Tom fights alongside Sylvester and his minions against unnamed trolls, but eventually encounters Troll Face. Troll Face fires a bullet at Tom, but Sylvester shields him from the shot, dying in his place. Sylvester explains that he had always cared for Tom and considered him family before passing away. In shock, Tom goes silent and coughs up massive amounts of blood as the markings on his hand move and his powers are stripped away[1] for failing to maintain emotional neutrality. Just before Troll Face can shoot Tom, Silver appears to save him, as Tom watches helplessly, still shook over what happened. Silver fends off Troll Face, leaving both him and Tom, glaring angrily as blood continues to drip from his mouth.

Silver then helps Tom escape from the castle, taking Sylvester's corpse with them. They locate Coyote, moments after finishing his battle with Demaro and Miladox. Tom is shaken, and expresses regret over what had happened. He is left behind with Silver as Coyote, broken by the news, rushes towards the castle to unleash his wrath.

As time passes, after Silver rescues Rob and Blaze from falling to their deaths, Tom watches over Sylvester's corpse and is saddened as he recalls the death of his friends, including Porky. He tags along with the group and they soon rest in a forest nearby, but to their misfortune, they are tracked by Pori and a group of trolls searching for the attackers of Troll Fortress. Tom steels himself, and instructs Rob to watch over Blaze as he and Silver confront Pori's gang. 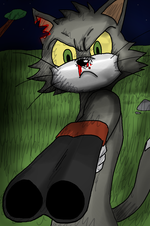 The two come out from the shadows to fight, but moments before, Tom recalls his sexual encounter with Petunia and states that if not for his actions that day, Porky and his family may have lived as they would not have come to the battlefield where they were slain. The two opposing groups then rush at each other. Tom quickly slashes Jasper's nose off before grabbing Hogwart and slamming him onto the ground. Per Silver's instructions, he rushes towards Perky Jackson, sustaining some damage in the process from a stray bullet that Silver was unable to hold back and from Perky Jackson's attempts at fending him off in hand to hand combat. Tom snags Perky's gun and lays waste to Perky and Jaspar, but hesitates when Hogwart begs for his life. Tom and Silver argue, as Tom believes that they should spare Hogwart, stating that it is immoral of them to kill a man who has surrendered. After thinking of Coyote and Sylvester and how they would react, he concedes and chooses to kill Hogwart. Before he is able to, however, the group is ambushed by a Hell Hound.

Tom watches in fear as the Hell Hound approaches Rob (who had made his way to the battlefield to try and support his friends). After Hogwart distracts the Hell Hound, Tom attempts to blast the Hound with his gun but his efforts are shown to be futile as the Hound menacingly stands before him. The Hound slashes at Tom, destroying his gun before moving to kill Hogwart. Tom pulls himself together and faces off with the Hound, having several moments of self reflection, as he describes his sexual encounter with Petunia as the beginning of a curse that would doom his friends to their terrible fates.

He and the Hell Hound exchange blows, but Tom sustains multiple claw injuries and is sent flying towards a tree, bleeding from his chest and arm. As he looks at his injuries in a panic, Tom looks up and notices Silver and Rob looking at him in concern. He then pulls himself together and throws himself on top of the Hell Hound while urging his friends to escape. Tom is then shaken off of the Hell Hound, and as he falls, the Hound opens his mouth and ends Tom's life by chomping his head off.

Tom can appear to be loud and emotional but truly cares for his allies. As seen in the flashback of Porky, he attempts to cheer Porky up after his wife leaves him and gets angry when Coyote appears to not care for Porky when he suggests leaving him behind on the battlefield of Christians and Satanists. He begins to cry when his Sylvester is shot and killed despite needing to maintain a neutral state of emotions, losing his Neutral powers in the process.

He is also shown to be somewhat idealistic/innocent and naïve at times, such as when he suggests that things will simply work themselves out for Porky and his wife given time. This is also shown when he gets into a conflict with Silver regarding how to treat Hogwart, as he becomes uncomfortable with the idea of killing a man who surrendered himself and has a family of his own.

Tom is also closely related with Sylvester, often butting heads with him and engaging in friendly banter with him. Sylvester has constant arguments with Tom, as they compete to see who can kill the small animals they chase after first. Sylvester kills Tweety first, doing so before even the flashback begins, earning Tom's envy. They apparently got into a bar fight over this before, and come close to doing so again during the flashback. While Tom eventually kills Jarry, they always find new things to argue about, such as their taste in porn. They also compete to see who can kill the most trolls in the troll base, with Sylvester complaining that Tom "steals his kills".

Following Sylvester's death, Tom becomes much more subdued and pensive. It is revealed that he blames himself for the deaths of not only Sylvester but also Porky and his family, believing that if not for his actions, they would still be alive. His involvement with Petunia in particular is shown to be one of his greatest regrets during his final moments.

Tom controls the corpse of Jarry.

Being a Neutral, Tom has access to the powers of necromancy much like his peers. He is able to use his strings to manipulate the dead and make them fight for his bidding. However, due to losing his powers, he is no longer able to do this. What Tom can do beyond the powers of the Neutrals is unknown.

did you know that even with seat belts people die all the time in car crashes? i thought that was interesting
—Tom shares some trivia, chaper 8: the neutral's, Page 19 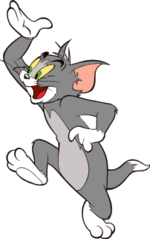 Tom is based on Thomas Cat, a character from the animated series Tom and Jerry who first appeared in 1940. He is the rival to the titular small mouse, Jerry. Most of the show is centered around Jerry avoiding Tom's attempts to eat him and Tom being brutally maimed in the process.

In Tails Gets Trolled, he is much more talkative than his original incarnation, and actually succeeds in killing Jerry. He also does not possess necromancy powers in the original show as he does here. 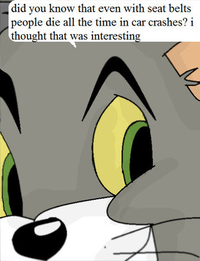 Tom is one of the most well-known characters from Tails Gets Trolled, due to him appearing in several iconic scenes, such as when he discusses interesting facts about seatbelts, or his distressed facial expression during his hangover which became the basis for the Unsettled Tom "meme".