Mew Two is a character appearing in Tails Gets Trolled. A discarded experiment of Eggman's, he is seen searching for a reason for his existence.

Mew Two is humanlike in shape for a Pokémon. His face, however, is more animal like, having a snout and two stubs growing from his head. Mew Two's body is mostly gray, with his tail being colored purple.

At some unspecified point in time, Mew Two was created and then tossed away by Eggman as a failed experiment. Since then, he appears to have spent much of his time floating aimlessly throughout space, musing to himself about his purpose in life. He appears for the first time on Chapter 25: Wicked Influence, Page 1. After floating through space for some time, Mew Two stops as he notices a strange light in the distance. From the light emerges Zaygar, who traps Mew Two in a barrier and pulls him back into the portal with him.

Mew Two appears to be very pensive, as he is deep in thought regarding the purpose of his life and what he was made for from his first appearance.

At the current point, it is unknown if Mew Two has any powers of note. He does appear to be capable of flight as he is seen flying through space. 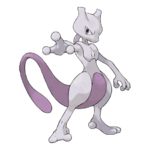 Mewtwo is one of the original first generation Pokémon in the Pokémon franchise, numbered 150 in the national Pokédex.

In the main video game series, Mewtwo is not capable of human language. In the anime and as well as the manga Pokémon Adventures, however, Mewtwo is shown to be capable of understanding the human language and speaks both by voice and by telepathy. The Tails Gets Trolled incarnation of Mew Two appears to have some similarities to the Mew Two from the Pokémon movies (particularly the first) as he is seen pondering his purpose in life.