Batman is a character appearing in Tails Gets Trolled. He is a member of The Defenders and helps mentor Tails to prepare him for his battle with The Trolls.

Before joining The Defenders, Batman would often clash with the Joker until once day he finally killed him. As he was dying, the Joker revealed himself to be Batman's lost uncle and explained the truth behind what was really going on in his city. Batman would learn that his loved ones, including Alfred (the leader) and Robin, were the real evils of the city and the Joker was only trying to stop them.

Upon hearing this, Batman sets out on a quest in which he kills most of his loved ones before finally confronting Alfred. Alfred reveals that he had hired assassins to kill Batman's parents and reveals that he is a member of The Trolls before being killed off. Batman would join the Defenders soon after to help their efforts against The Trolls. Interestingly, Knuckles mentions to Tails that Robin has been captured by Cheeto Man to keep Batman in line, which contradicts his account of the story where he mentions that he had killed his closest friends.

Batman is first seen when Tails is brought to the Defender's hideout by Pori alongside other members. He does not meet with Tails until Chapter 8: the neutral's where he explains his story to him, and begins to help improve his hand-to-hand combat skills. Tails initially struggles with his training and fails to land a single hit on Batman. Batman then advises Tails to focus on his opponent's movements, reading them, and reacting quicker in order to land a better hit. They fight again and Tails nearly lands a hit on Batman, impressing him with the fact that all it took for Tails to improve was simple advice. The two then move on to play bloody knuckles to finish off their training, before he sends Tails on his way to train with Hello Kitty.

Not much can be said of Batman thus far because he does not appear too often, but he does harbor a strong disdain for The Trolls, leading him to join the Defenders.

Despite Batman naming Robin as one of his enemies in then past, he does still appear to care for him, as Knuckles mentions that Cheeto Man had kidnapped Robin, forcing Batman to work for him.

Batman is very skilled in hand-to-hand combat. He appears to be quite fast and reflexive during his short sparring session with Tails, and manages to stop Tails before he can land a hit. 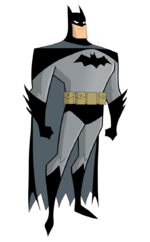 The goddamn Batman is a comic book superhero who fights to protect Gotham City. After losing his parents, Bruce Wayne, the true identity of Batman, sets out to become a hero to fight against crime. He is typically aided by his faithful butler, Alfred, and his sidekick, Robin.

Batman typically has access to a variety of gadgets to use in battle, but in Tails Gets Trolled he has used his fists to fight thus far.