Woodstock is a member of The Defenders appearing in Tails Gets Trolled. He helps train Tails by improving his reflexes and reaction time.

Woodstock is a small bird like creature, measuring up to only half the height Vivian. He does not appear to have a mouth (but is capable of speaking regardless) and has yellow skin/feathers. The top and back of his head are stylized in such a way that appear similar to fins.

Woodstock joined The Defenders after witnessing the death of Snoopy, who had been killed by The Trolls in a similar manner to Doug's dog, Porkchop. He is first seen alongside the other Defenders when Pori introduces Tails to the group after being taken to their base.

Woodstock first trains Tails during Chapter 8: the neutral's. He explains to him his ability of having a quick reaction time and then sets up a gun to fire at Tails in random speeds "until he says so". He then leaves to get a hot pocket while Tails begins to dodge bullets. He returns later in the chapter after forgetting about Tails, much to his annoyance. To make sure his training has gone smoothly, he pulls out a bb gun and shoots are Tails directly. He passes upon seeing Tails dodge the bullet and sends him on to train with Batman next.

Woodstock can be lazy, opting to automate Tails' training while he goes off to do other things such as taking a shit or eating hot pockets.

As he mentions himself, Woodstock is not very strong physically and has "limited" speed. His main power comes from his quick reaction speed, which he helps pass on to Tails. 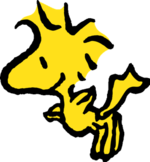 Woodstock is based off of a character from the comic strip Peanuts where he is a friend to the main cast of characters.

In Peanuts, Woodstock does not speak and communicates solely through chirping noises but is capable of speaking full sentences in Tails Gets Trolled. He also appears to be significantly larger, measuring up to roughly half of Vivian's height compared to his original depiction where he is bird-sized compared to the other characters.