Kermit is a character appearing in Tails Gets Trolled. He is a member of The Defenders who joined after trolling his friends, and attempts to train Tails in the art of patience.

Kermit is shown having green skin with eyes resembling a frog, as one would expect from his namesake. Throughout the story, he is always seen wearing his Defender robe, so it is unknown what he looks like underneath.

To Troll a Troll

As noted by himself, at the time, Kermit did not truly understand the impact trolling can have on others, referring to it as "fun and games" between each other. Some members of Kermit's group began to develop a liking for trolling and began trolling chat rooms on "pal talk". Eventually Kermit (and pals) hit the point where they sought out tougher victims to troll in order to test the limits of their abilities.

Some time later, a troll suggests to Kermit that the best challenge for a troll is to troll another troll. Kermit and his friends began to turn on each other, trolling one another resulting in a large troll battle between everyone of the group. The trolling continued until the weaker members began to drop, either by committing suicide or being mind broken beyond repair, eventually leaving Kermit, Animal, and Miss Piggy. Kermit ultimately uses Miss Piggy's care for him to completely break her mentally, to the point where she had to be locked away according to himself, leaving Kermit and Animal.

Animal used Kermit's guilt over destroying Miss Piggy to troll him, causing Kermit to become "vary unstable". Rather than retaliate, Kermit taught himself patience and found a way to get back at Animal for good (leaving him as "no more") before hunting the original troll who turned everyone against each other, eventually destroying him. After some time alone, Pacman eventually appears to help Kermit regain control of his life, leading to the frog joining the Defenders.

The Art of Patience 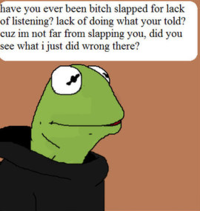 After Tails finishes training with Hello Kitty, he moves on to Kermit who attempts to pass on his skills of patience and how to focus better. Unwilling to listen, Tails pays no attention to Kermit's long backstory and moves on to train with Spyro. The next day, he and Hello Kitty appear to observe Tails' flight training with Spyro. Kermit notes that although Tails may become strong, he lacks mental fortitude and is concerned for the fox for when he gets into an encounter with a skilled troll. After Spyro and Tails conclude their training, Kermit informs Tails that Pacman has ordered for his training to be finished as soon as possible, so he quickly sends him to Cheeto Man.

The next time Kermit is seen is after Tails finishes training with Ronald and Cheeto Man breaks up the two after getting into a fight. Kermit goes to inform Pacman about Ronald's attack and watches as the clown apologizes for his actions. Kermit then takes Ronald back to Tails to apologize, but Tails is unwilling to accept it. Ronald and Kermit then leave elsewhere.

Later, alone with Ronald, Kermit prepares to use the "Intellect Bond" as instructed by Pacman to help determine the source of Ronald's mental instability. He goes deep into Ronald's memories, eventually hitting the point where Ronald forces the Intellect Bond to break and leaving Kermit puzzled as to why he had reacted so badly.

Kermit is rather calm and reserved, not one to break easily under pressure. He remains calm when he rushes in after Ronald attacks Tails, as well as when Ronald breaks the Intellect Bond.

He is also shown to be rather caring even if he does not outwardly express it towards others. He shows concern for whether or not Tails will be strong enough for when an actual troll appears. Kermit also shows great remorse over trolling his friends (Miss Piggy in particular) in the past.

As described by himself, Kermit's main ability is patience. He notes himself to be more patient than others, and uses that to his advantage in order to stop Animal from breaking him mentally in the past. He also attempts to pass this on to Tails.

Kermit is also capable of using the "Intellect Bond Level One" as shown with Ronald. This allows him to peer deeply into the memories of the other person, provided that they remain calm.

my story is a bit different from the normal stories, it started with me and my friends, our names was starting to get well known in the world we live in, so thats when it started, we had no idea what trolls were so we didn't see it coming, we was invited to a party, a troll party, all of the muppets showed up and we all had a pretty good time with our host, they all seemed pretty cool but that was just to draw us in, they asked us to come play some games with them, at the time it seemed cool but that was just to get our trust, so me animal and the rest of them, played there games and had a awesome time but like i said, it was just to get our trust so they could rip us down but none of us understood that and they started to insult us but we had no idea how to react to it, so they didn't get the negative response they was looking for, we was just confused but some of the muppets found it interesting, so we went along with it and thats when it started, we decided to do it but we didn't understand what we was doing, so we was liking it but we didn't get the point of it, it was all fun and games really, some of them took a liking to us because we was actually pretty good at it, but it dragged on and some of us liked it more then the rest of us, the animal took a liking to it the most and after awhile we started to get the point of the game, as we saw it and started room rating chat rooms on pal talk, just fucking around but then we started to challenge our selves, finding tougher people to troll, and we realized how good at trolling we became, consumed with it, we looked for tougher victims and thats when we ran into this one guy on the internet, that was different he said, the best challenge for a troll to troll is another troll, thats when me and my friends turned on each other knowing that, we could troll another troll, at the time we didn't know but that guy was a troll and he convinced us to turn on each other and thats when the real game began, so we all devided from each other and our goals was to troll each other and we manage to do so but that just made the other one angry and we started playing dirtier and hitting each others nerves really bad, it was a full out troll battle between us, it started getting worse and more personal because we all knew each other so well, its easy to troll someone you know but none of us could admit defeat and it dragged on

and our troll battle continued, it wasn't a fist fight kind of battle, there are other kinds of battles becides the kind you have with your fist, but anyways it raged on and some of the weaker minded ones was starting to give up but the rest of them like me and animal and mis piggy wouldn't let up and while we was challenging our selves we was also destorying each other, some of them was beyond repair mentally and some of them killed there selves, the numbers of us was getting smaller, the stronger minded ones was the last ones left, the other ones was broken or just left and the battle raged on, later it was just three of us me animal and mis piggy the rest left, killed there selves or just never spoke to us again, we was destroying each other and we was afraid of losing, we couldn't handle it , and soon enough i pushed mis piggy to far because she cared about me and i used it to destroy her

you see, i broke her,she was no longer stable, she became something else, she went insane and they had to put her away, never saw her again after that, but the animal was to good at trolling and he used what i did to her, and he knew i felt aweful about what i did to her and he used my insecurities agents me and he made me vary unstable, but unlike the rest of them i became something else and i used patience and i came up with away to get animal and i did and he ended up no more, so after i found the person who tricked us and i destroyed him to, i became a monster losing my self and a new face helped me and in return i work for the man who helped me, pacman helped me get control of my self and thats why im here

you see theres nothing more i can explain to you, that is my story, i was a vary skilled troll and i trolled my friends and my self in the proses and its easy really to do such damage to your self as well as others, but you wont understand what im talking about until it happens to you, you will run into a troll that can do what i do and you wont know how to deal with it, my training is so you can be patient for moments like that,

but if you dont want to do this training then i wont waste my time with this training and you can train with the next person, i will not try to force you how to be patient because that is impossible, make your move tails
—Kermit telling his backstory, chapter 10: silver's plan and tails training, Page 11 and Page 12 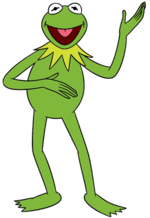 Kermit the Frog is originally from a group of puppets named The Muppets who would appear in various shows and movies.

Kermit in The Muppets does not possess the Intellect Bond and is not capable of reading other's memories telepathically.