Pacman is a character appearing in Tails Gets Trolled. After losing his friends and home village to The Trolls, he begins his quest to look for the Dragon Balls but is unsuccessful in doing so, leading to him creating The Defenders instead with the purpose of fighting back against those who had taken away his friends from him.

Pacman is, as noted by Oxsist, different from other people. His body is a large yellow orb with thin limbs and legs protruding from his sides and lower area respectively. Pacman is also seen wearing orange gloves and boots. His eyes are shaped like quarter circles. 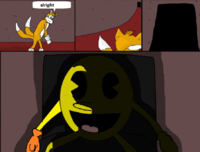 Pacman grew up in a village formed by the people chased out of the city of Alferd by Troll King. As he noted, he looked quite different from the other villagers but was treated nicely. Oxsist would train him and his friend, William into being powerful fighters each day. One night, Pacman has a vision of Troll King razing his village and awakens startled. The next day he tries to explain his dream to William, but he assures him that there is nothing to worry about. He then attempts to explain his dream to Oxsist, but is unsuccessful in convincing him to stay.

The day after, Pacman awakens to the village being burned down just as he had dreamed. He finds William and the two attempt to flee, but Pacman is shocked when he sees the Troll King in person, recognizing his yellow eyes. William shields Pacman from being killed by Troll King's lackey and escapes in tears. Now alone, Pacman eventually hears rumors of the "Dragon Balls" and searches for them so he can bring back his friends from the dead. After a long 15 years spent searching, however, Pacman comes to the realization that the Dragon Balls don't exist after failing to find one. Now jaded, he changes his focus to training himself to that he can kill the trolls. Pacman would soon come to realize that he alone would not be enough, so he begins to plan a group to defeat them, resulting in the Defenders. The night before setting out to find members, he has a vision of Tails soul binding with Sonic, starting his plan.

(Note: some time in between, Cheeto Man rises to power and kidnaps Pacman's wife and son according to Knuckles, leading to Pac-Man becoming a figurehead while Cheeto Man works as the real leader of the group.)

Head of the Defenders

After much time spent recruiting, the Defenders are able to recruit Tails by kidnapping him and convincing him to join their cause. Pacman explains to Tails his vision of the Soul Bind and explains that he must fuse with Sonic to gain the power he needs to defeat Troll King. (Unfortunately he also reveals to Tails that Sonic was killed, something the fox was not aware of.) He then instructs Tails to begin his training by meeting with Woodstock.

Pacman is not directly seen as Tails is training, but the other Defenders mention how he does give orders in the background. After Tails finishes his training with Spyro, Pacman instructs Kermit to tell Tails that he would like his training to go by faster. The next time he is seen in person is when Ronald appears to explain what had happened between him and Tails. He urges Ronald to control himself for the sake of everyone and allows him to apologize to Tails under the supervision of Kermit.

Pacman is not seen during Tails escape from the Defender's Base. He is notified about Tails learning about the Defender's true colors and tasks Vivian with sending him a pack of supplies. In a letter written to Tails, he urges him to hang on as he has a plan to overthrow Cheeto Man and for him to finish his training.

Pacman is shown to be a caring person who values his friends. His first instinct when searching for the Dragon Balls was to use them not to harm, but rather revive his friends from the dead. Pacman is also quick to forgive Ronald when he apologizes for harming Tails. He is also extremely determined, as evidenced by him lasting 15 years searching before finally giving up before refocusing his efforts into forming the Defenders.

Pacman has not been involved in any combat so far (aside from fleeing from the Troll King), so it is unknown how strong he is physically. He does have the power to see occasional visions of the future as seen when he predicts his village being burned down, something that Arthur and Vivian mention during Chapter 20: The Storm part 2. 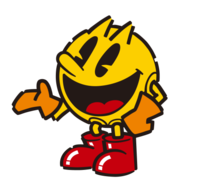 Pac-Man is the main character of his own franchise, Pac-Man. He first began as a simple arcade game but would begin to expand in the future to include other genres, ranging from adventure, 3-D platforming, or even racing games.

There does not appear to be any indication of Pacman's enemies, the four ghosts (Inky, Blinky, Pinky, and Clyde) existing in Tails Gets Trolled. In the titles where he does appear voiced, he also does not mix his speech with "wakka". There is also no indication of his trademark food/collectable item, the Pac-Dots appearing within the universe of Tails Gets Trolled. In terms of physical appearance, he does also not wear a crown and his boots are colored orange similar to his gloves, while they are red in most media.