Chapter 25: Wicked Influence is the 25th chapter of Tails Gets Trolled.

After a brief set of Dragon Ball Z related interludes featuring the decimation of Floridians and a horrifying wish from Shadow, the scene moves to a setting in space. Mew Two is then seen flying through the cosmos pondering the meaning of his existence, revealing himself to be a failed experiment of Eggman's. As he floats around, a sudden distortion appears in the distance. From it, Zaygar appears, and fires his cannon at Mew Two, trapping him within a force field of sorts. Mew Two is then pulled into the portal with Zaygar. The scene then moves to a bar, where The Narrorator, M-13, Spongebob and Patrick are seen. The latter two having a conversation.

Spongebob and Patrick muse over their current situation, bringing up the past and Sandy. Spongebob accidentally offends Patrick when he claims that Patrick never cared about her after Patrick shows some reserve over their current plans. The scene then moves to Ms. Frizzle who is speaking to Saralite, a witch of Hallow's End. It is revealed that Ms. Frizzle is in search of Arthur, one of her students, and has sought aid from Saralite. Saralite reveals Arthur to be in Cocoa Jungle and it is also revealed that she is in the process of creating a deadly potion for Ms. Frizzle's use. Ms. Frizzle thinks to herself, showing some suspicion over Saralite's character and is shocked when Saralite responds to her thoughts as she can evidentally read minds.

As Spongebob and Patrick seat themselves, Spongebob explains how his family was murdered by a close companion and that he seeks the power needed to get revenge. Saralite then lets out an ominous aura, and speaks to Spongebob telepathically, demanding a sacrifice of a loved one. Spongebob agrees as Patrick, unaware of the deal, jumps into action and attacks Saralite using the Fire Ball Jutsu technique. Saralite absorbs the flames and repels Patrick before using her Neutral strings to hold the starfish in place. As Patrick begs for Spongebob to act, Spongebob turns away and covers his eyes as Saralite forms a spear and impales Patrick, stealing his soul.

With the sacrifice complete, Saralite retrieves a book from her shelf and opens a portal, telling Spongebob that he will gain the strength he needs inside the portal. Spongebob enters the portal and the scene then shifts over to Arthur.

Arthur is seen meditating within his room when he recalls a troubling memory. He thinks back to a time when he and friends were confronted by Troll Face and his posse. Troll Face's group discuss among themselves which member of Arthur's group to rape. Moments after, Arthur is seen bloodied and naked, lying on the floor. He looks up to see his dog, Pal, in a bloody pool near Troll Face with his pants down. Troll Face, satisfied with his deeds, instructs one member of his group to spare Arthur and D.W for laughs.

Ms. Frizzle and her students trapped.

In the present, Arthur collapses and is brought to tears before Ms. Frizzle contacts him through an astro projection. Ms. Frizzle explains that her students have been searching for Arthur but have found themselves captured in a location south of the Defenders' Base. She reveals that she has resorted to using the magic of "Lord Ryzel" in her quest to free Arthur, shocking her disciple. As Ms. Frizzle's projection fades away, her students are seen trapped somewhere, tattered and bruised. 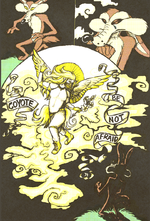 Meanwhile, the scene moves back to Rob and Blaze who are still resting inside of Coyote's spirit shield. The shield suddenly shatters as Rob and Blaze begin to plummet to their doom. Rob braces himself before Silver manages to catch them moments before the impact. Silver and Rob then make their way back to Tom who is seen mourning over Sylvester. He recalls the death of Porky as he notes the deaths of his friends before Rob and Silver meet up with him to retreat. The scene moves back to Coyote who miraculously has survived the explosion from Sonichu's corpse. He turns around and sees his book glowing with Miladox's aura, theorizing that Miladox must have saved him. The sky then begins to darken as a shadowy figure appears behind Coyote.

The figure, revealed to be Satan, attempts to seduce Coyote into accepting his powers. Coyote refuses, leading to Satan stating that his power is still in his hands and he can easily rob Coyote of his "gift" as well as torture his friends should he please. Coyote, still refusing to be a pawn, kneels and begins to pray. As he prays, an angel then emerges from the light and comforts Coyote. The angel then moves in, and places her hands onto Coyote's, overwriting the Satanic symbols with the Christian cross.

As the scene calms down, Coyote finds himself alone, and discovers the ability to fly using his strings. Suddenly, Troll King enters the scene as he comes crashing down, behind Coyote. Filled with rage, Troll King eyes down Coyote before using his muscle-weakening shockwave to immobilize Coyote. However, Coyote is still able to levitate and begins to flee as he knows that in his current exhausted state he would not be able to take on Troll King. Troll King then leaps at Coyote but is deflected, and knocked back towards the ground. As Coyote escapes, Troll King attempts to burn him down using Mario's blue flames, but the flames are dissipated by Coyote creating a barrier.

Troll King, alone, then summons Leon who reveals himself nearby. He instructs Leon to create a copy of himself to gather able-bodied trolls from Troll City while the real Leon stays to fill him in on what had happened while he was away. Meanwhile, the scene then moves to the destroyed fountain used by Kelic to create more Neutrals. Sinu and Minion are seen observing the remains, pondering what had happened. Minion then notices the house of god in the distance and suggests that they "visit" the local building to learn what had happened.

Troll King smiles as he watches Leon and Mauller talk.

The scene then moves over to Coyote, flying above Troll City. Using his powers, he unleashes a rain of his sprit strings down upon the denizens, placing strings inside them to monitor what is going on. Some local trolls scream out in pain as Coyote begins to feel faint from exhausting himself. The scene then moves to inside Coyote's book, where Demaro awakens in front of Garry's soul. Agitated, Garry begins to rant at Demaro, who is struggling to gain his bearings. Garry shakes his fist in anger (causing some pebbles nearby to levitate) as he moves to punch Demaro, however this is shown to be ineffective as Garry's ghostly hand goes through Demaro. Demaro stands and begins to think of a way to escape before noticing Coyote's unconscious body plummeting into his book.

Meanwhile, in Troll City, a local news station broadcasts the news of Coyote's string rain, thinking it to be an attack by sharp worms. Henry, the Reporter Troll is seen interviewing local denizens about their thoughts on the rain, many of which are left confused or hurt. After a shout out to the news' sponsors, the scene then moves over to the area around the former Troll Fortress, where Hulk is passing by. Boyfriend appears out of the blue annoying Hulk, but is then killed by Hulk throwing a rock. The scene moves to the Underworld, where Satan resides. His servant, Jackal, drags Hindo before him. Satan then orders Jackal to send Hindo to the mines for "refinement".

The scene then moves back to Troll King as Leon finishes recapping what had gone down. In the distance, a pile of rubble emerges from the earth and Mauller re-enters the scene unharmed. He lands in front of Troll King and presents the Book of Ryzel to the King. Mauller reveals that his soul now belongs to Ryzel as a result of him reading the book and obtaining power from it before passing it onto Troll King. Troll King observes the book for a moment before Leon and Mauller begin to chat. Mauller asks about the whereabouts of Alex and Pori while Leon disses Alex for being weak. The two burst into laughter as Troll King watches and smiles. In the distance, a tattered and Peter Pan-resembling Troll Face drags himself out before his father, having survived the explosion. He explains to his father that Sonic's Chaos Emerald had been lost in the explosion brought about by Sonichu's bomb. Before they can talk further, Leon notices Pori approaching in the distance, panicked. Pori reports that one of the troll camps was attacked by Shadow, angering Troll King. Troll King is shown angered before the scene moves to Lord Nem, who has captured Eyael and is threatening to take her blood.