Chapter 23: The conclusion - Part 3 is the 23rd chapter of Tails Gets Trolled, where Coyote concludes his battle with Miladox (and Demaro), only to learn of a tragic happening moments after.

Dazed, Coyote comes to his senses within a strange realm. Here, he comes face to face with Miladox, who wastes no time and rushes towards him. Coyote fires a ball of his strings at Miladox's eye, momentarily stunning it. Miladox takes a second to observe Coyote before rushing him again.

Coyote puts up a shield and summons the Poppy Bros. Jr. to defend him. One bro is quickly killed and absorbed into Miladox, causing a portion of its' tail to change. The brothers then throw several bombs at Miladox in a panic, causing Miladox to reel back and freeing the soul of their dead brother and Garry. 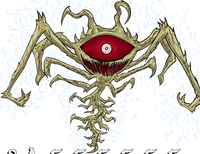 Coyote stitches together Garry's physical body and uses it in combination with his strings to do battle with Miladox, trapping it, and sending it flying around the arena, though he takes some injuries to his ears and back in the process. After dealing some significant damage, Miladox looks around the arena and then to the sky, signaling to Demaro. Demaro's third eye sucks in the bodies of the various trolls killed from before, pulling their corpses into Miladox's realm for it to absorb. Miladox then takes on a new appearance after absorbing several souls and charges at Coyote.

Coyote retreats into his book to think of a new strategy, launching the book around from within to allow Garry in so he can figure out the powers of his body. Coyote asks how to control Magma Garry and sends out a Goomba to check on Miladox. Miladox kills the Goomba, and Coyote sends out Garry's body, which transforms into Magma Garry and lands a few powerful hits on Miladox, releasing many of his captured souls. Coyote states that they have just defeated Miladox, who reforms after a brief conversation between the released souls. Coyote says that he's already won, and resumes control of Magma Garry. Miladox bisects the body and begins to observe Coyote's book, causing Coyote to restrain him using a healed Magma Garry. Coyote fires himself out of the book and towards Miladox using Dusk Hunter, then summons spirit chains, which encase Miladox. He pulls Magma Garry into his book, then smugly asks the demon where the gate to his realm is, revealing it. Coyote leaves Demaro's eye, pulling his book and Miladox with him. Now back in the real world, a weakened Demaro summons Addy the Demon to kill Coyote, who steals it for himself. Coyote puts Demaro into his book, then calls Road Runner, telling the bird that it is time to leave. He notices the fight between Rob and Hindo before having a vision of Porky, who warns him that a great evil is coming and that someone has died.

When Coyote begs to tell him who died, Porky assures him that he's with him now and that there are actually four Gods instead of one. Coyote's vision ends, leaving him to wonder which one he knows has died. Silver and Tom appear, with the corpse of Sylvester, as the former tells that they need to get everyone and retreat. Realizing that it was Sylvester Porky was talking about, Coyote is nearly in tears as he struggles not to show any sign of emotion in risk of losing his powers entirely. Despite a patch of his hair turning white, indicating his lifespan has been reduced, he regains his composure. Coyote tells Silver and Tom to bring Sylvester's body back to the base while he goes alone, stating he'll make sure the Trolls will never recover from his wrath.