Leon is a character appearing in in Tails Gets Trolled as one of Troll King's subordinates.

Leon appears as a small, brown skinned child wearing a green hoodie that conceals the upper half of his face. His hoodie is colored green and blue, with a yellow stripe across the center of the hood. Two large buttons are also seen on the hood itself as well as a red adornment underneath giving off the appearance of a chameleon's face (eyes) and tongue sticking out. His eyes are not visible under his hood in most cases.

After failing to kill Coyote, Troll King calls for Leon to appear. Leon then decloaks and stands by Troll King's side. Revealing himself to have some knowledge of what had transpired at Troll Fortress, Leon first creates a clone of himself to gather any fit trolls in the area to meet with Troll King, before he explains what had happened to the King while he was away.

As he finishes up his explanation, Mauller rises from the earth nearby. The group reconvenes and Leon mentions that he had requested aid from the "First Order" but is unsure if they will send any. Leon sticks with the group as both Troll Face and Pori end up reporting in before he cloaks and leaves on Troll King's orders. Much later he is revealed to have been following Silver's group, tracking them to a run down church.

Leon is obedient to Troll King, as he is noted to have been following Troll King for quite some time as well as doing some general scouting for The Trolls. (He is noted to be the one who cut off Heimerdinger's leg, several chapters before he officially reveals himself.) He does not seem to have a high opinion on Alex as he claims that he is not much stronger than the average Troll.

During his recap to Troll King, he seems to have some admiration for Rob's muscular figure and sweats nervously as he changes the subject. He also appears to be aware of the fourth wall as during the explanation, he recalls the fans complaints during certain arcs of the story (such as Garry and Demaro's fight) and snarks about the fans not understanding certain aspects of it (such as the Trolls defending their castle during Chapter 22: The conclusion Part 2).

Leon has the power to become cloak himself and trail others without them noticing. He can also create a clone of himself to act in multiple areas at once. 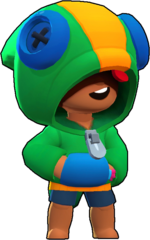 Leon is a legendary-Tier brawler appearing in the mobile game, Brawl Stars.

Thus far, there do not appear to be any notable differences from Leon's portrayal in Tails Gets Trolled as opposed to Brawl Stars, though it is still too early to judge as he has had not much screen time. However, he is shown smoking a cigarette in one panel on Page 22, while he is only seen with a lollipop in his mouth in the game.