Mysushi and Sirpigsalot are a pair of trolls known together as fish and pork. The two are a team competing in a trolling tournament against Underbite Troll and others in The Adventures of Underbite Troll, and later assist him with gathering dirt on the other competitors.

Mysushi then uses a knife to force open a door to another building where they find a laptop, covered in semen, with pictures of Underbite Troll displayed on it. The group then decides to wait to see if the owners will eventually return, and when they do, they discover that the house belongs to none other than The Fantasy Starwars Crue. Underbite pukes in disgust and the group begins to flee from the building (not before Sirpigsalot and Mysushi decide to lick his vomit off the floor). Sirpigsalot tosses Markus out the window and jumps out soon after, but is impaled by a glass shard through his forehead. Mysushi, unfazed, escapes with the rest and goes home to eat. Sirpigsalot, despite his injury, survives and later appears in Tails Gets Trolled. 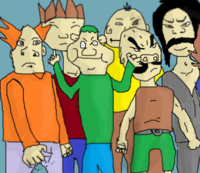 The duo are seen as part of Alex's backup.

Fish and Pork are briefly seen as part of Alex's backup when he chases Silver outside of Troll King's castle. They give chase but are frozen solid by Rob's Frost Breath and are not seen again until much later in the comic.

Sirpigsalot is later shown with Eddy accompanying Troll King in his search for the origins of the Words of Death. He speaks like a robot, and attempts to converse with Eddy.

The two in particular also appear to be based off of typical Asian stereotypes, such as having a fondness for anime/manga, rice, or being poor drivers.

Fish and Pork do appear to be quite skilled at breaking into other's houses to gather information, and stalking others. They had successfully managed to break into other troll's homes in The Adventures of Underbite Troll, as well as stalk Underbite and Markus from a distance without being spotted.

The Japanese words on Fish and Pork's poster are as follows (from top to bottom, left to right):