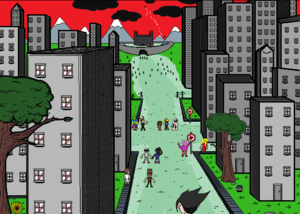 Troll City as it appears in Chapter 22.

Troll City is a massive city home to Troll King and many other trolls. It was originally known as Alferd before the Troll King assembled his army and forced half of the population out.

Originally, Troll City was known as Alferd. During the Middle Ages, people would often be a dick to Troll King due to his non-human origins. Troll King would soon be driven to hiding under a bridge to avoid these people until one day, he decided to get revenge on humans. Troll King gathers an army of women and robbers and has a family, but soon comes to the realization that he would need a real home. After building up his forces once again, he sets out to take over the city of Alferd. 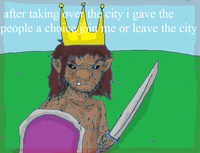 Troll King offers the people of Alferd a chance to join him or leave.

Troll King is successful in taking over the city and offers a choice to the population - to join him or leave. Half of the population chooses to join while the others choose to leave and form their own village. Years later, the former denizens of Alferd attempt to take back the city from Troll King but they are unsuccessful.

Alferd soon grows to become a haven for trolls and their degeneracy. The trolls begin to form their own culture and create an event known as Troll Offs, where two trolls get into a verbal battle and fight until the other side is speechless. During this time, Troll Face also becomes an extremely popular figure known for his rape and general madnesss. Troll Face related merchandise such as books, sex toys, and masks begin to appear and become popular items. Troll Face himself becomes the champion of the trolling championship, and future competitions feature an opportunity to go against him.

After the failure of the Fucking Awesome Plan, Silver and Rob leave The Troll Slaiyers and follow the trolls around until they find Troll City. They are joined by Fudd and together, they put on Troll Face masks and infiltrate the city. They run into Underbite Troll and Silver is challenged to a Troll Off. Silver defeats Underbite Troll and the group moves further into the city, where they find Troll King's castle. They are joined by Blaze, and Silver sneaks into the castle. Inside, Silver places a scanner for future use and soon discovers Heimerdinger locked inside a laboratory and learns of Troll King's plans to create a robot army. Silver attempts to escape, but is noticed by Troll King.

Outside the castle, Silver and his group are chased but manage to escape after Rob reveals his Dragonborn powers. They meet up with Coyote and begin devising a plan to rescue Fudd, who had been kidnapped by Hindo during their escape.

Back inside the castle, Fudd is tortured until he eventually agrees to help the trolls develop the Troll Bots. Demaro appears, called by his brother Garry, and asked to the join, but he refuses. Demaro returns after hearing that Fudd is imprisoned and attempts to see him, but he is stopped by Garry. The two then battle it out in a special underground chamber built specifically for their battle. Demaro wins with the aid of Miladox and makes his way inside, and finds Fudd.

Assault on the Castle

As Demaro threatens to kill Fudd, an explosion is set off outside by Coyote, tipping off Demaro to his presence. Many trolls rush outside to confront Coyote, but they are trapped within a cage by Silver. He and Blaze then proceed to kill them using spears while the others move inside. Fudd uses the chaos as an opportunity to escape from Hindo, who begins to chase him. Fudd comes across the morgue and Luigi's preserved corpse, and revives him to assist in his escape. While in pursuit, Hindo runs into Rob and the two begin to battle. Just as they begin their battle, Coyote encounters Demaro and the two begin their battle.

Demaro is dragged along the fields surrounding Troll King's castle.

Elsewhere, Tom and Sylvester stay behind to kill trolls. They reveal their corpses consisting of several Looney Tunes and other animated series characters and get to work. Soon after clearing the area, they are ambushed by Troll Face, who shoots at Tom. Sylvester sacrifices himself to prevent Tom from dying, causing Tom to become emotional and lose his Neutral powers. Just before Troll Face can finish Tom, Silver appears and saves him. Troll Face escapes, and the two are left standing speechless.

Rob and Hindo's battle takes them from the insides up onto the roof. Both fighters prove themselves to be very capable, creating new strategies to counter each other and trading blows. Hindo lands a large hit on Rob using a lightning bolt, sending him falling into a nearby lake. Rob nearly drowns before gaining the resolve to fight on, and escapes the lake, sending Hindo flying into a pillar.

Coyote and Demaro's battle takes them outside the castle, in the surrounding fields. As they battle, trolls from the city area rush in to defend the castle. They begin to overwhelm Demaro to the point of physical and mental exhaustion, causing Miladox to take over. The Miladox empowered Demaro slays the backup trolls and injures Coyote.

Meanwhile, the Neighborhood Watch notices the battle raging on at the castle, and attempt to assist with its defense. They are stopped by a gang of four nearly identical looking trolls and give up after being informed of a recent law that Troll Face had passed where all visitors would require a pass obtained by giving him a rimjob. Back in Demaro's battle, Demaro eventually powers down and returns to normal. Coyote uses this opportunity to show Demaro that he never had a chance at victory and counters many of his attacks. Coyote, wishing to see Miladox's powers again, begins provoking Demaro until Miladox empowers him again and draws Coyote into his eye.