Aubrey Cat is a minor character appearing in Tails Gets Trolled.

Aubrey Cat has black fur and a yellow collar. He appears to be bipedal for an animal and has a notably large nose. He also appears to wear white gloves and has human-like hands. 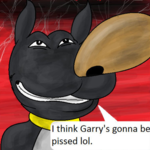 Aubrey grinning to himself.

Aubrey Cat first appears as one of the trolls appearing as backup during Chapter 21: The conclusion Part 1. He and his compatriots troll Demaro as he is injured and watches as he kneels, ready to accept death. Moments after Demaro is saved by Miladox, Aubrey Cat continues to troll Demaro but is quickly torn to shreds by Demaro's new found power.

Aubrey Cat's soul reappears during Coyote's battle with Miladox within its realm. After Coyote crushes Miladox, Aubrey briefly reappears and comments on a penis being sucked into the realm, giggling with the soul of the cannon troll.

Aubrey Cat, as with most trolls, enjoys trolling and reveling the chaos. Notably, even after Demaro is empowered, Aubrey does not appear astonished like his fellow trolls, only appearing to be afraid moments before he is killed.

Other than trolling, it is unknown if Aubrey Cat has any powers of note.