Ronald McDonald is an mysterious illusionist working for The Defenders in Tails Gets Trolled. He can be quite unstable at times and poses problems for Tails when he begins to train under him.

As a young child, Ronald still appears with his red afro. After reaching adulthood, his facial features change considerably. He now has black markings underneath his eyes and red paint around his lips. He also has a red clown nose and now wears the robe of the Defenders, marked with the McDonalds arches (though his are colored red instead of yellow). His skin is also white, though it is unknown if this is due to make up or his natural skin color changing, as his hands are also shown to be white when he is choking Tails. 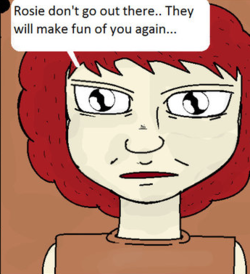 Ronald as a child.

When Ronald was young, he often witnessed his older sister, Rosie ODonald, being trolled for her weight, appearance, and fondness of Justen Beaver. These trolls would often troll him in the process simply because he was related to her. One moment in particular is shown when Kermit uses the Intellect Bond on him, showing Ronald looking over the dead bodies of the trolls who trolled Rosie after overdosing on pills.

After some time, Ronald and his family attempted to take action against the trolls. The Donalds first attempted to sue the trolls but failed due to the "freedom of speesh" and the fact that there were simply too many to sue, so they instead hired a hit man. This would also fail as the hit man would later be killed by The Trolls and then later raped by Troll Face. The trolls would later end up killing Rosie by forcing her to watch Twilight, causing her to cry and erode her brain cells in the process. They would then send a video of Rosie's death to Ronald and his family.

Ronald is briefly seen when Pori introduces Tails to the Defenders, but he does not actually speak to Tails until Chapter 11: wild tempers where his training officially begins. Before Tails finishes training with Vivian, Ronald spies on the two and laughs as he notes how "weak" Tails is, paranoid over the idea that Tails may replace him. He is less than happy to see Tails later, sarcastically referring to him as the "amazing Tails that Pacman told us much about", before they are interrupted by Trix Rabbit, who Ronald quickly shoos off. Afterwards, Ronald states that he refuses to train Tails and the two almost fight before Pori steps in.

After 30 minutes, Ronald is suddenly willing to cooperate after being spoken to by Pori. He then explains his powers of illusion, and instructs Tails to use Cheeto Man's Cheeto Ball and Vivian's shadow powers together to create a duplicate of himself. After much time passes, Tails manages to master a basic level of illusion powers and thanks Ronald. He congrats Tails but notes that he was quickly able to learn a power that took himself a while to learn, and attacks Tails when he reaches out to fist bump. Triggered, Ronald begins to choke Tails to death, ranting about how he will enjoy killing the "chosen one" that many support. He nearly succeeds before Cheeto Man enters the room and fights Ronald, beating him until he is launched into the air and vanishes. 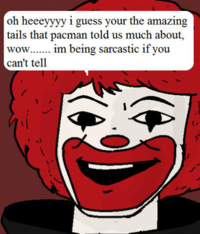 Ronald being a sarcastic asshole.

Following his outburst, Ronald is taken to Pacman and begs for forgiveness. Pacman forgives him and reassures him that Tails being there does not make him any less important, and allows him to go and apologize to Tails under the supervision of Kermit. The two find Tails smoking with Cheeto Man outside the base and Ronald attempts to apologize but his apology is not accepted. He then offers Tails a chance for revenge but he also denies it, stating that Sonic would not want revenge. Ronald and Kermit then leave.

Later, Ronald is alone with Kermit, who informs him that Pacman has instructed him to perform a level one Intellect Bond on Ronald to try and find the cause of his outbreak. Kermit searches through Ronald's mind, revealing details such as how he watched Tails train with Vivian, and even a small moment from his past, when Rosie was alive. Ronald immediately loses it when Kermit sees his memory of Rosie, and forcefully breaks the Intellect Bond.

Ronald is not seen for quite a while, though he does make some mysterious appearances in the backgrounds behind characters during the weed party. He is not directly seen until Knuckles escorts Tails out of the Defender's base. He watches as Knuckles explains the truth behind the Defenders to him, smirking as he watches Tails suffer.

Ronald can be mistrustful and paranoid, especially when he believes that he is being replaced or that someone is superior to him. It is implied that before Tails joined the Defenders, his mental breakdowns were more common until Kermit stepped in to help calm him.

Ronald is not shown interacting much with the other Defenders other than Tails, who he hates due to the attention he is receiving and the fact that he was able to quickly learn a power that took Ronald much longer to master himself. His anger peaks when Tails attempts to shake hands with him, causing Ronald to snap and nearly choke him to death. He does attempt to apologize for his actions afterwards, but it is unknown if he is being genuine or not as he continues to sneer at Tails as he and Knuckles escape from the Defenders' Base.

Ronald's main power revolves around creating illusions, which comes in various steps. The most various type is creating a copy of one's self, though he notes that perfecting a clone can be very difficult. In particular, he notes that Tails' illusions are off with regards to the amount of fingers they have or body shape.

The second level of illusion mastery involves changing the environment by adding or removing features to throw an opponent off. The third, according to Ronald, is taking on the appearance of a completely different person, noted to be one of the more difficult techniques due to the user needing to impersonate the person's personality (noting that it has to be at least 85% correct).

The next level Ronald mentions is altering a person's entire surroundings and/or the whole landscape. Following that, the next ability mentioned involves entering another person's mind and creating dreams to fool them with. The final level mentioned by Ronald is the power to create an illusion on a person's body in order to fool them.

Ronald is also shown to have the ability to turn himself invisible as shown when escaping, presumably another trick usable by illusionists. 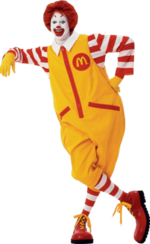 Ronald McDonald is the mascot for the fast-food restaurant chain McDonalds. He is a friendly clown who appears in television commercials advertising the restaurant alongside other mascot characters.