The events of Tails Gets Trolled have never been properly put into place by Lazerbot, however, it is possible to deduce a timeline of events based on what is known. It should be noted that because the story may or may not continue in the future, the already imperfect timeline is subject to change and may radically vary from what has been written down on this page.

Sylvester makes a promise with Coyote.

Day 1
Coyote and the gang celebrate Sylvester's killing of Tweety by getting wasted. Porky cheats on his wife and has his car keys stolen. The group drunkenly stumbles into a Neutral meeting held by Kelic. Coyote, Sylvester, Fudd, Porky, Tom, Kelic and Demaro obtain the power.1

Day 2
The 7 are given a day to decide if they want to keep the power or not. Coyote discovers first before the others, Porky is kicked out of his house, he meets up with Sylvester, Tom and Elmer while Coyote seeks Kelic out. Porky accidentally reveals his neutral powers to his Christian congregation and is chased out, they soon murder his parents and wife, Porky kills himself, the Neutrals run away. That night they keep their powers.1

Day 3
Kelic gives up his powers/being a satanist, confronts Demaro and is killed by him.1
Sylvester inserts strings into the other characters and obtains Porky and his family's bodies.2
At night, Coyote and Sylvester discuss their current situation as Neutrals.2 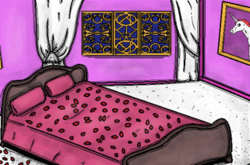 The room where Amy is held.

Day 1
Amy meets Sonic. They spend the night together and almost make love.
Day 2
Eggman captures Amy. He takes her to one of his bases and repeatedly rapes her.
4 years later
Sonic finds Amy and brings her to his cave.
2 Years later
Sonic finds and brings Tails home from one of Eggman's labs.
Some time later
Shadow battles Sonic, Sonic gives him an Emerald. Shadow and Sonic become friends.
Some more time later
Amy then tells Sonic of what happened during her captivity with Eggman. Sonic's hatred for Eggman intensifies. 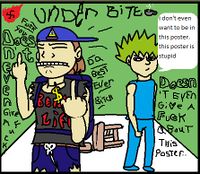 Underbite Troll and Markus' poster for the competition.

Some time before the events of the story
Butter Tits and the Dick Taker troll Underbite and Markus, and spread rumors about their relationship.
Day 1
Hearing of these rumors, Underbite Troll seeks vengeance. Underbite and Markus win a troll-off with the two.
Day 2
The next day they sign up to the Trolling Tournament, they kill one troll with their trolling and have an encounter with The Fist in Poo Clan.
Day 3
The Trolling Tournament happens, BiteUnder squad fights against The Fist in Poo Clan and emerge victorious. Later that night, joined by Fish and Pork, they invade the home of The Fantasy Starwars Crue. It goes awry.
Day 4
The Trolling Tournament continues. The comic ends at this point.

Unknown time before the events of the main story

(The order of events listed from top to bottom is not necessarily important.)

Related to the Defenders 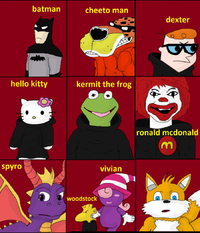 The Defenders as they are introduced to Tails.

Related to The Trolls 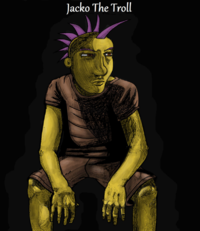 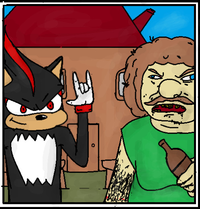 Shadow and Kario in the old days. 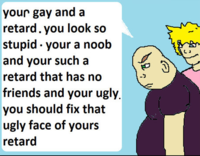 The words that started it all.

Tails gets trolled. Sonic tries to solve it without villians, but fails and gets so mad he has sex with Amy so he won't feel so mad. They break up. Toad gets trolled, Mario and Luigi watch as Shadow kills them Trolls and high shovels Knuckles, Troll King sends Pori to warn Shadow that he is being hunted.

The Troll Slaiyers form for the first time.

Knuckles wakes up with Rouge and Donkey Kong. Knuckles and Rouge gets the clap from Donkey Kong, Pori warns Shadow, Mario meets Shadow. Sonic confronts Shadow, a group of trolls attack and are killed. Silver, resting in a lava-filled area, gets trolled by Alex.

Mario and Luigi kills the trolls who were trolling a Goomba, Kirby gets trolled by Alex, Tails fights Alex but is beaten up by him. Silver and Shadow team up, Bowser kills the Fist in Poo Clan trolls, The Troll Slaiyers team up and hide at Bugs' place. Sonic finds Tails, injured by Alex and swears to get revenge.

Shadow and Knuckles are amazed by the Road Runner's speed.

The Awesome Fucking Plan/Justen Beaver Concert plan is devised, the Trolls mobilize for the concert. Shadow and Knuckles help Coyote capture the Road Runner, the stage is built in a day thanks to Coyote's assistance. Knuckles leaves to find Tails after being texted by Sonic. Sonic meets Eggman, The Troll Slaiyers camp on the built concert. 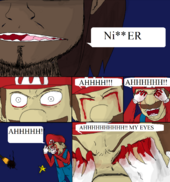 Mario is blinded by a Word of Death.

The Justin Beaver Concert. Coyote and the Neutrals watch over in secret as Luigi betrays/fights Mario, Shadow kills Bugs and Daffy, loses to Garry and Alex forcing the troll slaiyers to run away. Silver, Rob, and Fudd leave Shadow's group after being disgusted by his disregard for Bugs' life. Sonic kills Eggman and gets the coordinates of Troll King's hideout. Sonic meets and fights the Troll King, Troll Face, Alex and Garry. Espio, Emerl, Cream and Sonic are killed, Vector is spared sans an eye, ripped out of his socket by Garry. Garry gets his face burnt during the fight. Pori, Silver, Rob and Elmer watched the fight in secret.

Troll King and the other prepare to leave their hideout for the City. Troll Face rapes Sonic's corpse. Vector tells Shadow what happened, Mario reveals his plan to Shadow and runs away, Hindo spies on them. Bowser joins the Troll Slaiyers. Luigi tries killing the Troll King, Hindo arrives, Luigi is defeated by one of the Words of Death. Mario leaves for Mushroom Kingdom, Tails leaves the Water Park to see why Sonic isn't answering Amy's calls and is captured by The Defenders, Pacman recruits him. Meanwhile Silver, Blaze, Elmer and Rob invade Troll City, Silver has a Troll off with Underbite Troll.

Silver invades Troll Fortress, Troll Face uses Luigi as a sextoy to which Alex witnesses. Heimerdinger meets Silver, Garry brings Eggman's corpse. Heimerdinger helps Silver get away, Troll King punishes him. Rob reveals himself as a Dragonborn, Silver and Elmer fight off the trolls and run away, finding shelter at Underbite's home. Shadow and the Troll Slaiyers brainstorm until the night. Teemo is killed during their brainstorm, Knuckles retires to smoke his smart weed, hangs out in a troll camp for the rest of the night, Mario fights Troll King and loses but escapes. 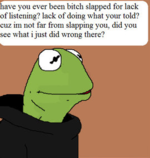 Kermit demonstrating what it looks like to lack patience to Tails.

Tails trains with Woodstock. Silver and gang are raided by Jacko the Troll in Underbite's apartment, Underbite and Markus are killed. Elmer reveals his neutral powers, Troll King sends Hindo to capture Elmer Fudd, Tails finishes training with Woodstock and moves on to Batman. Silver meets Coyote and the Neutrals. Tails finishes training with Batman.

Troll King interrogates Elmer, Knuckles and Amy join the Troll Slaiyers brainstorm, Shadow starts to lose his patience with Knuckles. Silver and Coyote make a plan to rescue Elmer Fudd. Elmer controls Eggman's corpse to help Heimerdinger under the threat of his penis being cut off by the Troll King. The Troll King leaves Troll City to find the words of death. Tails trains with Hello Kitty. Garry calls Demaro to the Troll Castle, and unsuccessfully asks him to join the Trolls. Tails trains with Kermit and Spyro. Mario arrives at the Mushroom Kingdom following his battle with the Troll King. Tails finishes his training for the day. Pori arrives at his secret laboratory.

Garry's soul is absorbed by Miladox.

Tails continues his training with Spyro, meets Cheeto Man. The Troll Slaiyers train on. Shadow becomes so annoyed with Knuckles that he leaves momentarily to cool off. Coyote and Silver's group finish their plan and get to work. Shadow kills an entire village of innocent people. Tails trains with Dexter and Vivian, while Shadow lays out the new plan. Donkey Kong introduces Guy, Tiny Kong, Chucky Kong, and his Rambis to join the Troll Slaiyers. Tails starts training with Ronald McDonald. Shadow recruits the new Bounty Hunter. Demaro confronts Garry after finding out Fudd is within the castle. Garry fights Demaro and is consumed by Miladox. 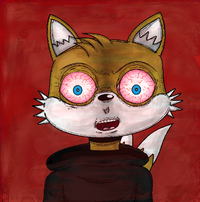 Tails upon seeing the dumping grounds.

Coyote and Silver storm the Castle, Silver and Blaze stay behind to kill a cage full of trolls. Rob fights Hindo while Coyote fights Demaro, the sky turns Red, Elmer controls Luigi while the chaos distracts Hindo. Fudd has a brief flashback of Eggman raping Amy and is shocked during his escape. Teemo, Pikachu and a Foot Ball Player join the Troll Slaiyers. Tails finishes training with Ronald McDonald and is attacked by him, before being saved by Cheeto Man. Troll Face kills Sylvester, Silver saves Tom, and Troll Face escapes. Tails and Chester smoke weed, Ronald apologizes to Tails, he tries a soul bind with Kermit. Rob defeats Hindo (for now).

Mario obtains the Holy Star from E. Gadd, and gets a visit from Pori who reveals the truth behind Shadow. Troll King continues searching for the Words of Death with Travous. Knuckles, Doug, Tails and Spyro have a weed party in Spyro's room, Doug ruins it, They then have a weed party at Cheeto's man cave. Knuckles arranges for the STD-free girls to join, causing Rogue, Candy Kong, and Patty to arrive. Patty discovers Doug and Skeeter having sex after stepping out to see Doug. Amy arrives at the party, has a disagreement with Hello Kitty, tells her story to Tails. Hello Kitty has sex with Tails, Amy has sex with Knuckles, the plan unravels. Vivian consults Arthur for a prediction.

Coyote fights Demaro. Jacko, Teabagger Troll and 30 other trolls are killed during the fight. Tails and Knuckles run away from the Defender hideout, the Sky begins to change back, Coyote is sucked into Demaro's third eye into Miladox's realm. Tails and Knuckles find Amy, Jesse, Candy and Patty's corpses, they run, Spyro lets Tails go. Coyote and Garry's soul defeat Miladox, Coyote collects Miladox, Demaro's guardian and Demaro himself in his book.